Chinese-American takeout-style food is a popular dinner in my house. Whether it’s from our favorite restaurant around the corner or from the freezer aisle at Aldi, we’re always up for it. Aldi is a nice option for times when dining out isn’t in the budget, and we are fans of the discount grocery store’s mandarin orange chicken, General Tso’s chicken, egg rolls, chicken lo mein, and more. All of the Asian foods at Aldi are sold under the grocer’s Fusia Asian Inspirations brand, which is not a separate company but rather an Aldi private label.

When I recently spotted some Asian entrees in the grocer’s Aldi Find freezer section, I picked some up to make for a Friday night dinner at the end of a busy week. One of the meals I purchased was a sweet teriyaki chicken skillet that comes with mixed veggies. It looked like a good way to enjoy one of our favorite types of food while also getting a serving of vegetables. 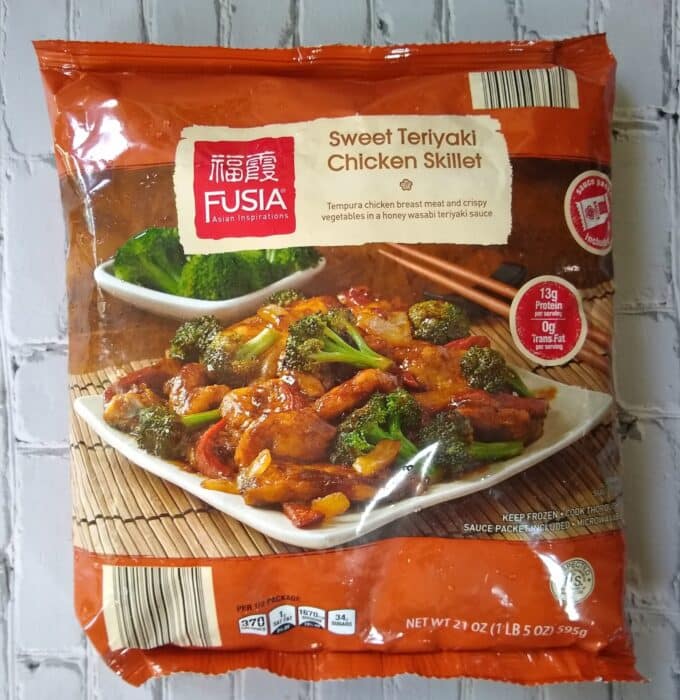 The Fusia Asian Inspirations Sweet Teriyaki Chicken Skillet cost $5.99 for a 21-ounce package at the time of publication. The package describes this as “tempura chicken breast meat and crispy vegetables in a honey wasabi teriyaki sauce.” It was sold alongside a sweet sesame chicken skillet.

This is an Aldi Find, so it’s only in stores for a short time. Each store gets just one shipment, and after that sells out, they’re gone unless Aldi decides to bring them back at some point. Aldi does not offer online ordering for products that aren’t in stock at your local store.

If you’re looking out for allergens, this contains egg, milk, soy, wheat, and sesame.

This can be heated in a skillet on the stovetop (recommended) or in the microwave.

To heat in a skillet, thaw the unopened sauce packets in warm running water and set aside. Preheat a skillet or wok on medium-high heat adding 1 tablespoon of cooking oil, or coat with nonstick cooking spray. Add the chicken and vegetables to the skillet and cook for 10-12 minutes or until heated through to an internal temperature of 165 degrees, stirring frequently. Stir in the sauce and serve.

To heat in the microwave, thaw the unopened sauce packets under warm running water and set aside. Place the remaining contents of the package in a microwave-safe dish and add 2 tablespoons of water. Cover and microwave on high for 5-6 minutes. Stir and heat an additional 4-6 minutes or until heated through to an internal temperature of 165 degrees. Drain and let stand for 1 minute. Stir in sauce and serve. 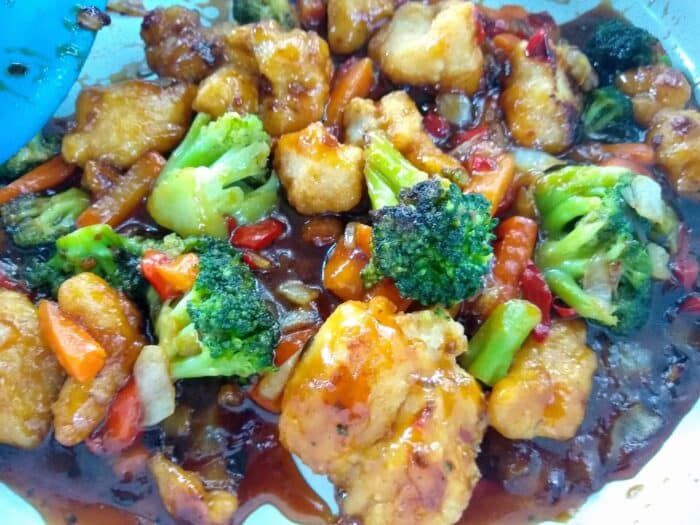 I heated this entrée in my Crofton 4.5 Quart Saute Pan. The sauce for the meal comes in two separate packets, so be sure to fish out both packets before you pour the rest of the package’s contents into your skillet. This heated easily in the time advertised. You’ll want to stir it frequently while cooking to make sure it heats evenly and doesn’t stick.

My family loves almost any meal with tempura chicken, but this one was meh for us. For starters, it doesn’t have that classic teriyaki flavor I expected. Instead, it’s salty (and one glance at how much sodium is listed in the nutrition panel confirms this), and it has a mild spicy flavor most likely owing to the fact that the fine print on the front of the package states that wasabi is a component of the sauce. It really doesn’t taste anything like teriyaki, and it’s not that sweet, even though it has more added sugar than many desserts. In short, this meal is terrible for you in terms of sodium and sugar. I know a lot of Chinese-American dishes are high in salt and sugar, but this one seems especially so.

On top of that, because this meal is heated in a skillet instead of baking the breaded tempura chicken in the oven, the chicken breading comes out slightly soggy. My family still ate all of the chicken pieces, but in the future I think I’ll stick with buying tempura chicken meals that can be baked or air fried because we like a crispier breading.

On a positive note, I thought this meal had a reasonable ratio of carrots/veggies to chicken. Often with these kinds of dinners, I’ll find a lot of veggies added as filler (especially lots of carrots). This was decent on that front, though.

Still, I ended up throwing out some leftover veggies and sauce in the bottom of the skillet after dinner was over. Between the forgettable sauce and the slightly soggy chicken pieces, no one in my house is requesting more of this.

The Fusia Asian Inspirations Sweet Teriyaki Chicken Skillet has a nice mix of tempura chicken and various vegetables in a mildly spicy sauce (thanks to wasabi). We found it to be salty and not much like teriyaki sauces we’re familiar with. Because this is heated in a skillet, the tempura chicken also doesn’t crisp up like we’d like it to. This meal is okay, but it’s not one we’ll buy again.