Aldi sells a lot of products for cats and dogs throughout the year. In addition to Aldi’s cat food, cat litter, cat treats, and dog food, it seems that every month or two the discount grocery store rolls out additional pet items, including pet beds, food and water bowls, and cat houses and activity boxes. One of Aldi’s most recently offered pet products is the Heart to Tail Cat Tunnel. 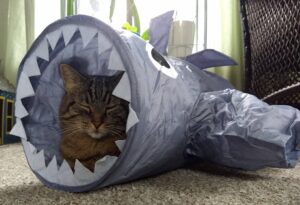 The tunnels and crinkle sacks are made of a nylon/tent type of material with a crinkly layer inside the fabric, and they’re supported with flexible metal hoops that help hold the them open so cats can crawl in and out. 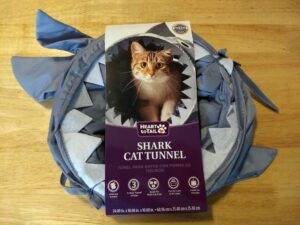 All the designs collapse for storage. My shark tunnel has small ties to hold it closed.

The tunnels are slightly larger than the crinkle sacks, and they feature what Aldi calls a “three-way” tunnel design because they have narrower “tunnels” that branch off of the main one, although the branches seem too small for a typical adult cat to fit in. Rather, those seem like good spots to place toys cats can bat at.

The packaging my tunnel came in has a seal for the American Choice Awards indicating that Aldi’s Heart to Tail brand was voted a “Best Brand” winner. 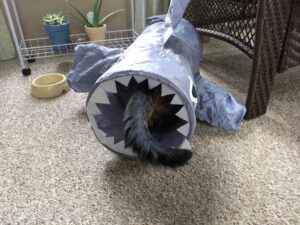 My cat getting eaten by a shark.

My cat really likes the cardboard house I got her from Aldi last December and she spends a lot of time sleeping in it, but I wasn’t sure what she’d think of a crinkly tunnel like this. I untied it and opened it up, and she nosed around some. Then I gently nudged her inside it to “show” her how to use it. She ended up settling down and taking a nap in there, and she also likes to play when I stick toys like feathers on a stick in the various holes.

So it seems like the shark tunnel is a hit. That’s a good thing, too, because last year’s cardboard cat house is starting to wear out.

My cat approves of Aldi’s Heart to Tail Shark Cat Tunnel. So far she has enjoyed playing in it and sleeping in it. The tunnel comes in a goldfish design as well as the shark design. Aldi also sells a similar Heart to Tail Crinkle Sack that opens on only one end and not two like the tunnel. The crinkle sacks come in unicorn or dragon designs. The tunnels and crinkle sacks fold up for easy storage.