Aldi has sold several varieties of Indian simmer sauces over the years, and the grocer has made so many changes to its Indian sauce formulas that it’s sometimes a challenge to keep up with all the developments.

We’ve seen Aldi’s tikka masala sauce go through at least four changes, and not always for the better. The most recent version is Cook House Tikka Masala Sauce, which is okay but nowhere near as good as the original Journey to India Tikka Masala we first fell in love with. We’ve also seen Aldi’s korma sauce go through changes, being offered first under the Journey to India label and now under the Cook House label. 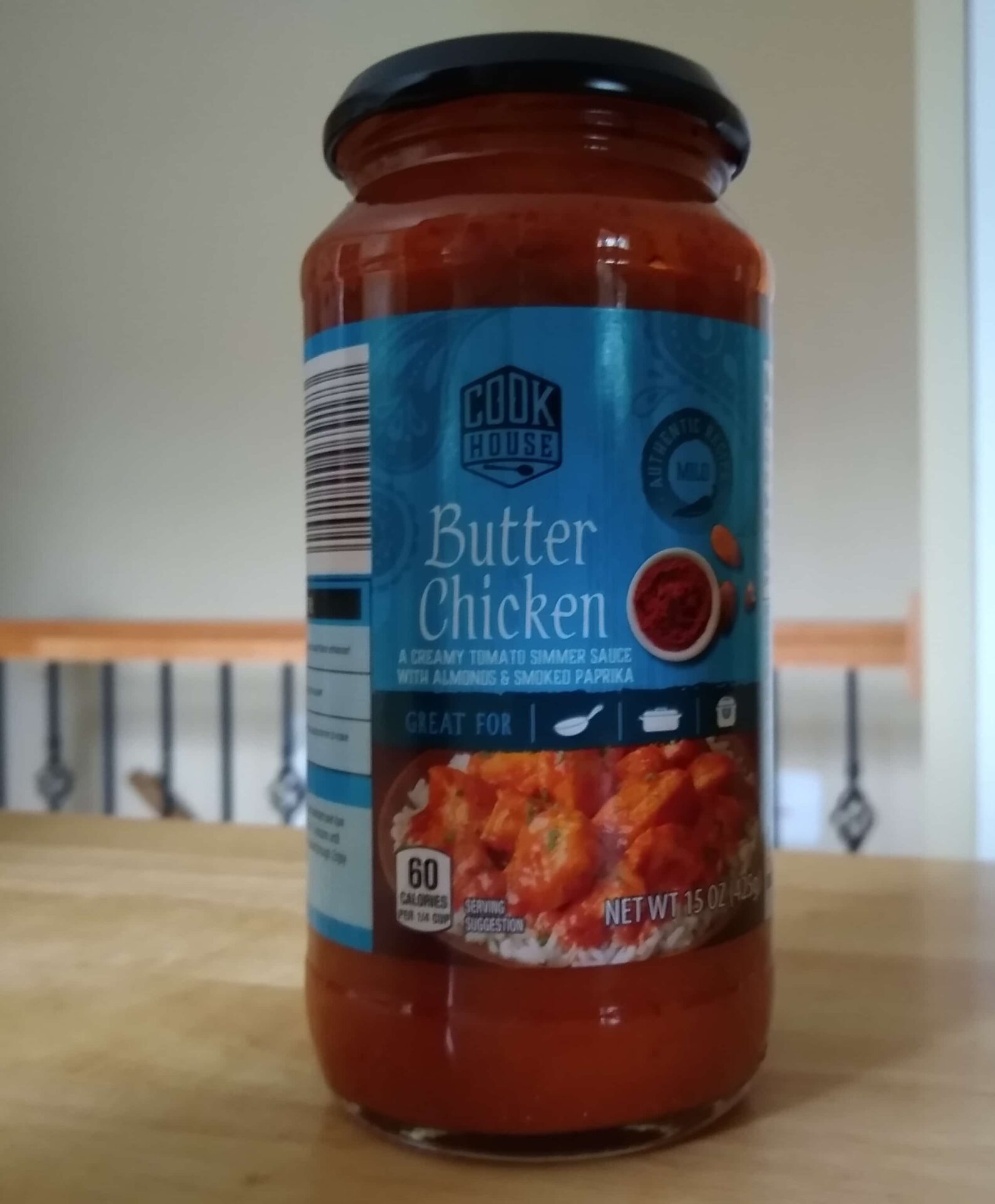 Cook House Butter Chicken Sauce cost $1.99 for a 15-oz. jar at the time of publication. This is a Regular Buy product, meaning it is available all year at Aldi. It is a product of the United Kingdom.

The sauce is described as “a creamy tomato simmer sauce with almonds & smoked paprika.” The jar states it is an “authentic recipe” and is mild.

The main ingredients are water, onion, tomato paste, sugar, cream, and modified food starch. We were disappointed to see water as the first ingredient, something that has become common in the reformulated versions of Aldi’s tikka masala sauces. As a positive, though, this sauce is made with mostly recognizable ingredients.

People with allergies should be aware this sauce contains milk and tree nuts (almonds). It may also contain peanuts and other tree nuts. 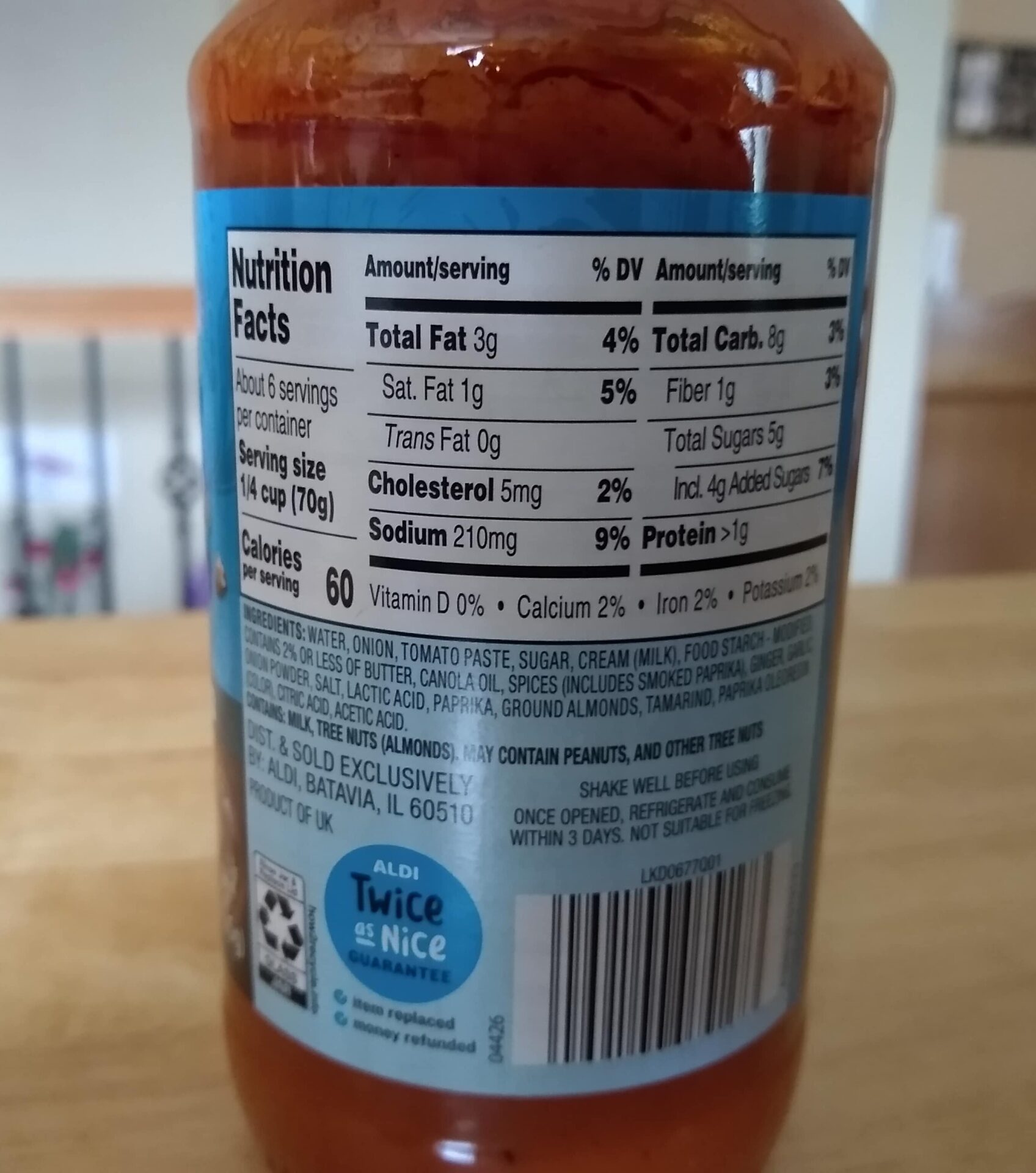 To saute, heat oil in a saute pan or wok. Season chicken with salt and pepper, and brown evenly in hot oil. Add the entire jar of simmer sauce. Cover the pan and simmer over low heat for 10-12 minutes until chicken is cooked through. Enjoy with rice.

You also can pour the jar of sauce on top of meat before placing it in the oven to roast, or you can add the sauce to your slow cooker along with meat of your choice and let it simmer.

I prepared this sauce the way I usually do with jarred Indian sauces. I heated some cooking oil in a large skillet, added pre-cooked chicken from a whole bird I had previously roasted, added the jar of sauce, and let it simmer for about 10 minutes until it was thoroughly heated. I served it alongside Aldi’s naan and white basmati rice (both Regular Buys) and Aldi’s chicken samosas (an ALDI Find that is available once or twice a year for a short time).

My family and I didn’t have the highest hopes for this sauce. We’re still disappointed over everything Aldi has done to its original Journey to India Tikka Masala sauce, so we’re cautious whenever we try any new Indian sauces from Aldi.

However, we were pleasantly surprised by this butter chicken sauce. It has a tomato base that is nicely complemented by spices, including smoked paprika, ginger, garlic, onion powder, and tamarind. It also is mildly spicy. This might be our new favorite Indian sauce from Aldi, and I think I’ll be purchasing it again.

Aldi’s Cook House Butter Chicken simmer sauce is surprisingly good. It has a nice balance of tomato flavor and spices and has just enough spiciness to make it interesting but not too hot. Recommended.