Aldi just can’t seem to stop making tweaks to its jarred tikka masala sauce. They’ve made so many changes to the formula that we have whiplash over here. In the past year, we’ve now seen four different variations on the sauce, all with different calorie amounts and different ingredients. 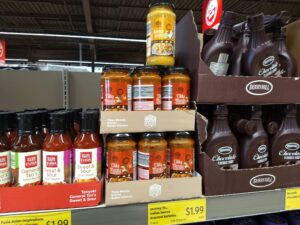 Our local Aldi. Notice that the Journey to India price sticker is still on the shelf.

The latest version of Aldi’s tikka masala is the Cook House Tikka Masala sauce, which I noticed in my local store this week. It sold for $1.99 for a 15-oz. jar at the time of publication. 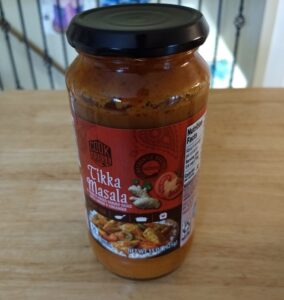 At first glance, this looks like a big change because the previous Regular Buy tikka masala sauces at Aldi were all under the Journey to India house brand name. Aldi has never sold tikka masala under its Cook House brand name before. Cook House is another private label Aldi brand that offers a variety of sauces, ranging from marinades for beef and chicken to simmer sauces to huevos rancheros sauce.

The Cook House Tikka Masala is described on the jar as “a tomato-based simmer sauce with ginger and coriander.” 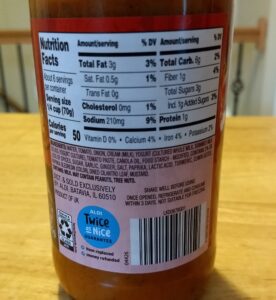 The Cook House sauce contains milk, and it may contain peanuts and tree nuts.

The preparation instructions state the sauce is best for sauteing (add to a wok or skillet for a quick and easy flavor enhancer), roasting (pour on top before placing in the oven), or slow cooking (add to the slow cooker and let the sauce simmer).

Cooking instructions say to heat oil in a saute pan. Season chicken with salt and pepper, and brown evenly in hot oil. Add green and red peppers along with the entire jar of simmer sauce. Cover the pan and simmer over low heat for 10-12 minutes until chicken is cooked through. Serve with rice.

How Is the New Sauce Different?

In the past, Aldi has sold three other versions of tikka masala under the Journey to India label:

A comparison of ingredients in the new Cook House Tikka Masala indicates that it’s nearly identical to Journey to India 45-calorie tikka masala. The first ingredient in both sauces is water, which is telling, and the rest of the ingredients are identical and in order after that.

But you pay for that health improvement with less taste. My family tried the Cook House Tikka Masala for dinner with some chicken, basmati rice, naan, and samosas. Opinions ranged from bland to okay. It tasted a lot like the 45-calorie tikka masala. So, while it looks like a big product change because of the new name, it does not actually appear to be much of a change.

Aldi has now carried four different varieties of Regular Buy tikka masala sauce during the past year. The latest version is Cook House Tikka Masala Sauce. A glance at the ingredients list indicates it is practically identical to the previous Journey to India 45-calories-per-serving tikka masala sauce (which has been thoroughly panned by Aldi fans online). The Cook House sauce has slightly higher calories, fat, and sodium than the 45-calorie sauce, but the differences weren’t big enough for my family to notice a significant taste difference. My family was not impressed enough to convince me to buy more. We’ll be over here waiting for Aldi to bring back the original, perfect 70 calories-per-serving Journey to India Tikka Masala.