Skip to content
Home News Is Aldi Affected by the Baby Formula Shortage?

Is Aldi Affected by the Baby Formula Shortage? 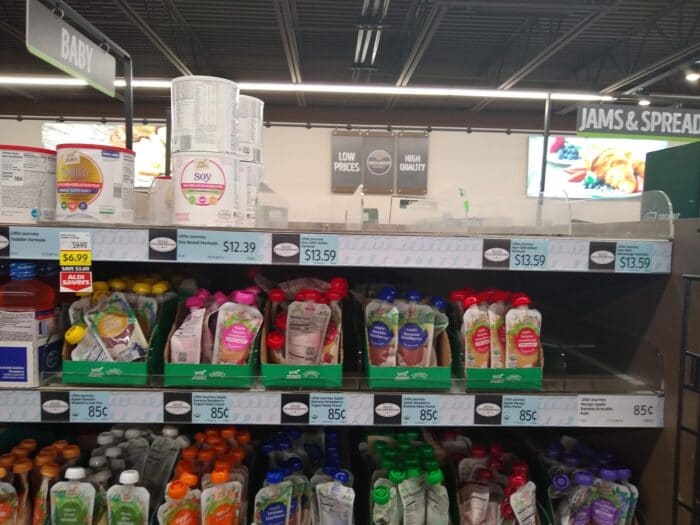 The United States is in the midst of a severe baby formula shortage, with grocery store shelves sparse or empty and parents worried about how to feed their infants. The shortage is driven by multiple factors, including pandemic-driven supply chain challenges, restrictions on foreign formula imports, a large formula recall and factory shutdown at an Abbott Labs plant in Michigan, and the fact that formula in the U.S. is produced by only four companies. (That last factor is due in part to the fact that only a few companies in the United States have government approval to provide formula for the Special Supplemental Nutrition Program for Women, Infants and Children, known as WIC, which serves low-income families.)

The formula shortage affects both name brand formula products such as Enfamil and Similac as well as generic store brands such as Parent’s Choice (Walmart) and Well Beginnings (Walgreens). Many stores have bare shelves or are limiting how much formula customers can purchase at one time.

Is Aldi Affected by the 2022 Baby Formula Shortage? 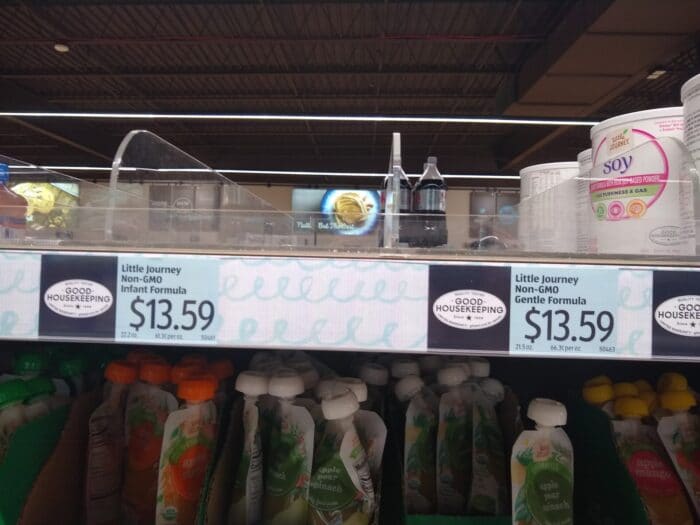 Empty formula shelves at one of our area Aldi stores in late May of 2022.

Yes, Aldi is affected by the formula shortage.

The baby formula page on the Aldi website states: “Due to increased demand, some inventory may be temporarily unavailable.”

Aldi typically sells several types of formula for infants and toddlers under the store’s Little Journey private label. Little Journey encompasses a variety of baby and toddler products at Aldi, including diapers, wipes, baby wash, lotion, and food and snacks. 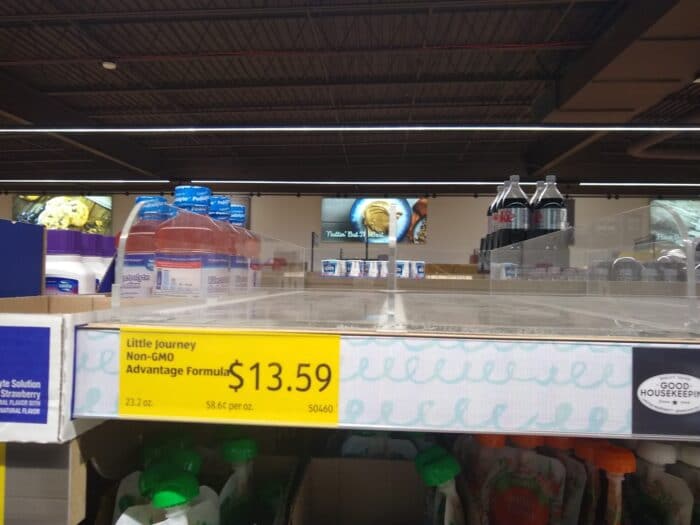 More empty shelving where formula would normally be stocked.

Also, of note, most — if not all — Aldi formula appears to be manufactured by Perrigo, which makes the majority of store-brand infant formulas in the United States, including for retailers such as Walmart, Sam’s Club, Target, Kroger, CVS, and Walgreens. (Perrigo also manufactures certain store brand over-the-counter medications, including Aldi allergy relief pills and Aldi allergy relief nasal spray.) If you’ve purchased private label or generic formula anywhere, there’s a good chance Perrigo manufactured it.

During several recent visits to a couple of our local Aldi stores, we’ve taken note of the formula supplies in the baby aisle. At both area Aldi stores we went to, there were only a couple of cans of the soy based baby formula and the toddler formula. We haven’t seen regular infant or baby formula in our local stores for a while. 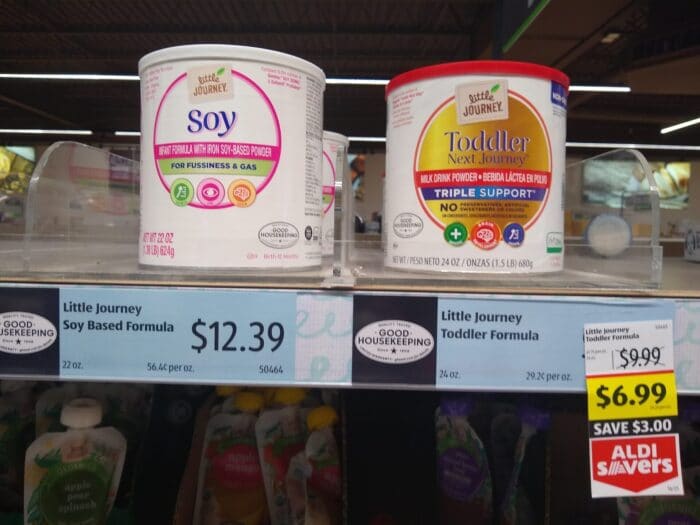 Soy formula and toddler formula are the only types of formula we can find at our local stores currently, and even those are in short supply, with only one or two cans of each.

When Will Aldi Have Baby Formula in Stock Again?

Formula companies and the government are taking steps to alleviate the formula shortage.

On May 18th, President Joe Biden announced he would invoke the Defense Production Act to speed up formula production. Biden also announced “Operation Fly Formula” to quickly transport formula from overseas. On May 22nd, the first flight of formula arrived Ramstein Air Base in Germany to Indianapolis, Indiana, which is a distribution hub for Nestlé. The flight contained 78,000 pounds of formula.

Also, this week Abbott announced that it hoped to begin production at its Sturgis, Michigan, facility again in June, after working with the FDA to address safety issues. The plant was shut down in February 2022 after an FDA recall of several brands of formula due to potential bacteria contamination that may have killed at least two infants. The FDA states it will take approximately two weeks to restart production at the Michigan plant and another six to eight weeks before the plant is at full capacity. The factory reportedly produces up to one fifth of all baby formula in the U.S.

Some companies have increased production and are speeding up shipments, and some states are allowing flexibility with what brands WIC recipients get.

Still, it’s going to take a while for the shortage to completely ease up and for supply chain issues to sort themselves out. That means it will probably take some time before Aldi can get back to stocking full shelves of formula.