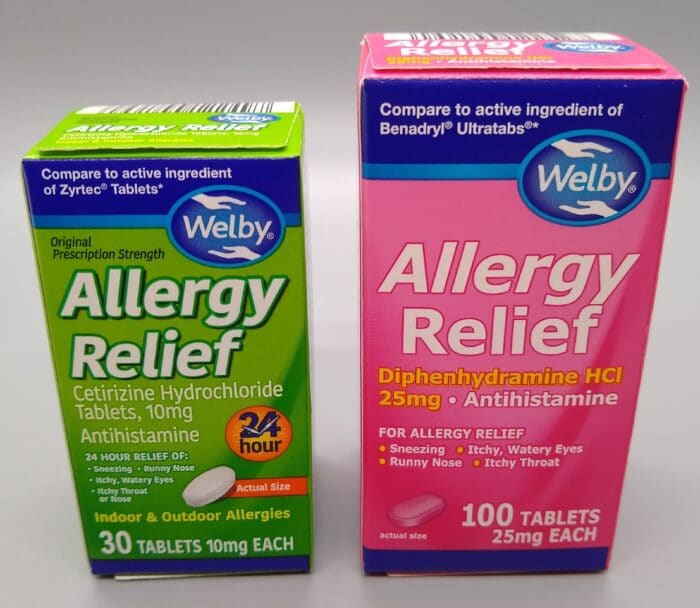 According to the Asthma and Allergy Foundation of America, over 50 million Americans experience allergies as some point during the year. Many of those are seasonal, tied to mold, pollen, and other particulates in the air. Different seasons bring different allergies.

There are a number of over-the-counter drugs to cope with allergies, including steroid sprays and traditional pain pills. Another popular option is antihistamines, which decrease the amount of a substance called a histamine, which is tied to allergic reactions.

In the medical world, there are two broad classes of oral antihistamines: first-generation and second generation. Both are effective at allergy relief. One advantage of second-generation antihistamines is that they often (but not always) are less likely to cause certain side-effects, like drowsiness. It depends, though, so, as with any medicine, you should always read the label carefully.

You can easily find antihistamines at any big box store or pharmacy, and most grocers sell them, too. It might surprise you to learn that Aldi does sell two popular antihistamines. 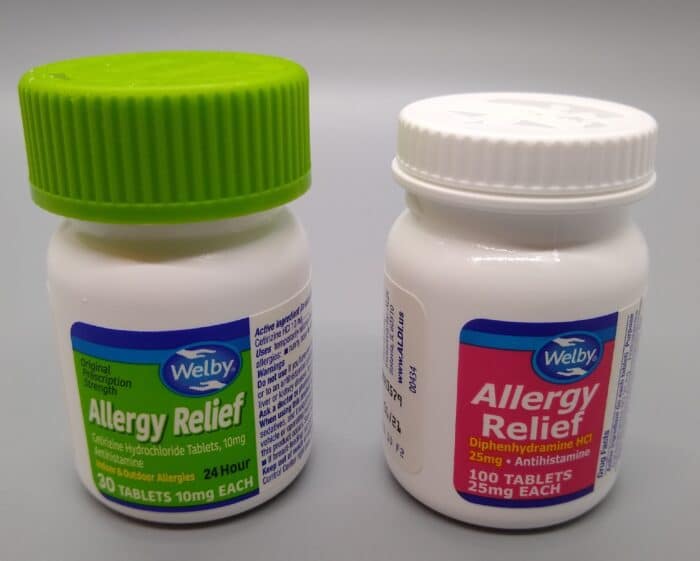 Welby Allergy Relief is an Aldi Regular Buy, which means you can find it in stores every day. Aldi sells two kinds of medication under this name: one in a pink bottle and one in a green bottle. The Aldi pink bottle pills have the imprint L479, while green bottle pills have the imprint 4H2 for each pill. Those imprints indicate that both are produced by Perrigo, a large producer of generic over-the-counter medications. Perrigo — which was established in the U.S. but later moved to Ireland to avoid paying corporate taxes — also makes Aldi’s take on Flonase.

Before I continue, a reminder: read the directions and warning labels before taking any medication, including these. I’ll say that again before this post is over. 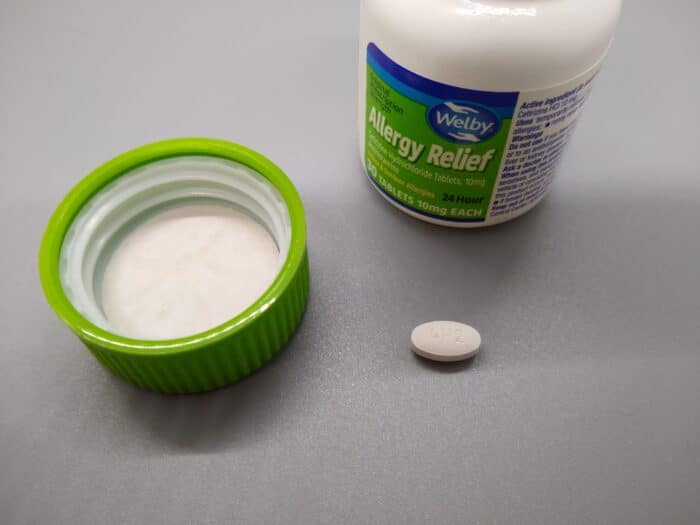 The green bottle is cetirizine, the generic version of Zyrtec, and the box it says it can be compared to Zyrtec Tablets. This drug was created in 1981 and was approved for over-the-counter use without a prescription in 2007. It is a second-generation antihistamine, although like many first-generation medicines drowsiness is a potential side-effect. 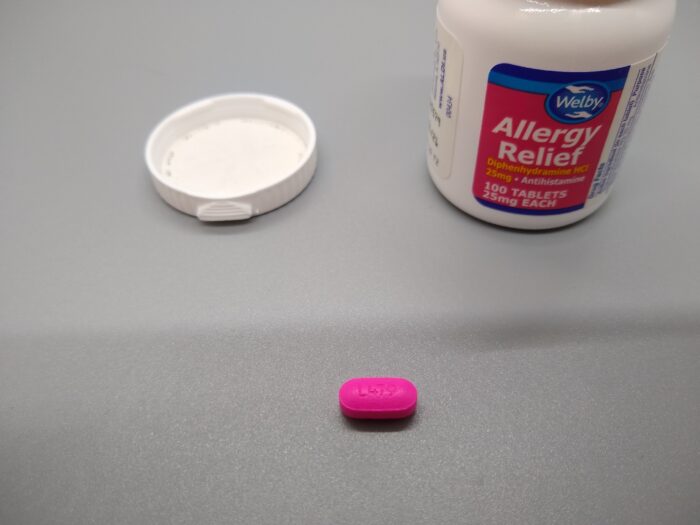 The pink bottle is diphenhydramine HCL, the generic version of Benadryl, and the box says it can be compared to Benadryl Ultratabs. This drug was first created in the 1940s and has been available without a prescription since the 1980s. It’s a first-generation antihistamine and has potential side effects, including drowsiness. In fact, drowsiness is enough of a side-effect that some people consider it as a sleep aid. That’s a big reason why you should never take this pill with alcohol.

The pink bottle costs $2.99 for a bottle of 100 pills, or about 3 cents a pill. Walmart sells a generic Benadryl for about 2 cents a pill, while brand-name Benadryl Ultratabs are closer to 12 cents a pill. You have to buy a lot more pills to get the Walmart price, though, so all in all the Aldi version is a good price.

As you can see, the generic Zyrtec (green bottle) is more expensive. Part of the reason is that it’s a more recent medication, but it also has another advantage. Benadryl’s effects only last for 4-6 hours, while Zyrtec only needs one pill for all-day protection. It’s up to you and your doctor to decide which one is best. 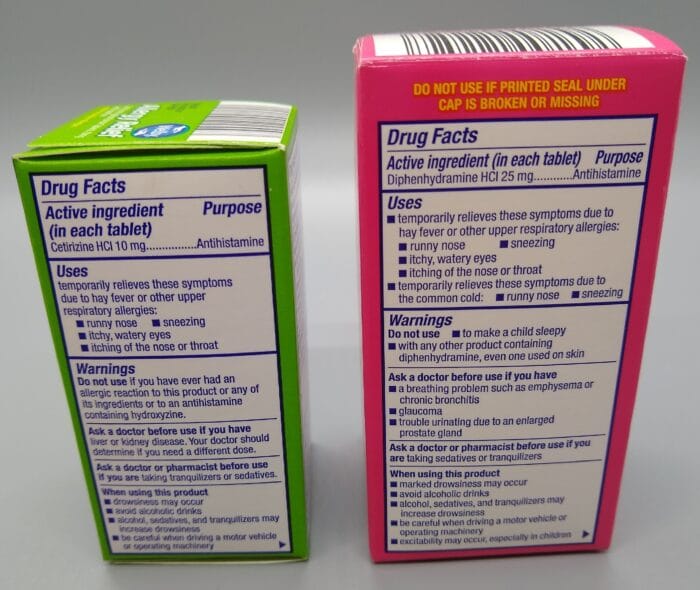 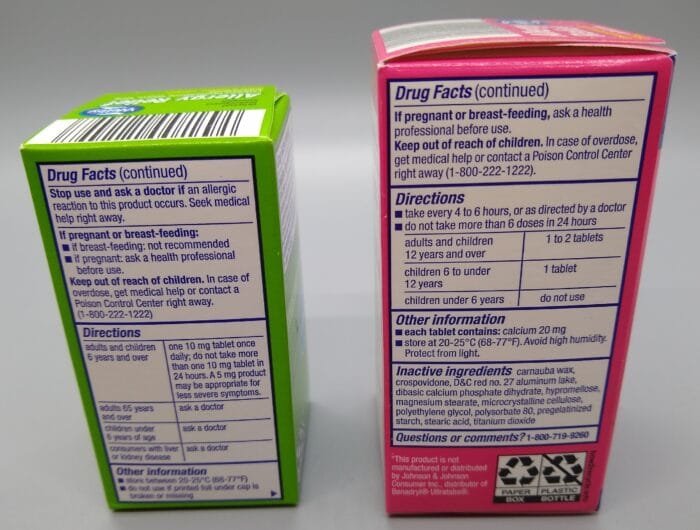 Aldi sells versions of both Benadryl (pink bottle) and Zyrtec (green bottle) as generic pills, and both are competitively priced compared to other generics at other stores. The pink bottle has the advantage of being very cheap per pill, while the green one offers longer-lasting protection. Both have potential side-effects, including drowsiness. This is especially true of the pink pill, which is a first-generation antihistamine. Be sure to read the directions and warning labels carefully before taking either of them.

One other note: there are other antihistamines out there, including Allegra, which are less likely to cause drowsiness than the two Aldi antihistamines. Aldi does not currently sell a generic Allegra, and at my local pharmacy generic Allegra runs 66 cents a pill, which is much more than either of these two pills. Keep that in mind if you’re looking for other possible pills to treat your allergies. And like I said a couple of times already — read the directions and warning labels.