Just about everyone likes Hawaiian Rolls. The soft, slightly sweet little rolls are perfect for eating with butter, and they make great slider sandwiches with lunch meat, cheese, and some seasonings. They also make a unique stuffing to serve alongside turkey or chicken, especially with Thanksgiving dinner or other special meals. For a while during the holiday baking season, Aldi sells a boxed Hawaiian stuffing mix alongside its traditional boxed stuffing mixes. 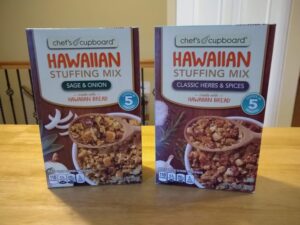 Chef’s Cupboard Hawaiian Stuffing Mix cost $0.99 for a 6-oz. box at the time of publication. It comes in two flavors: Classic Herbs & Spices or Sage & Onion. This is a Seasonal Favorite at Aldi, meaning it’s in stores for several weeks to several months, which is longer than an ALDI Find (Special Buy) product is on shelves. This stuffing often shows up when Thanksgiving items begin appearing in stores, and it tends to stick around for at least several weeks. 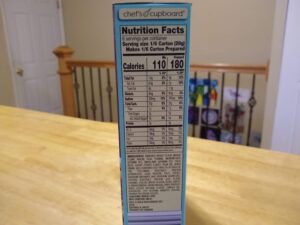 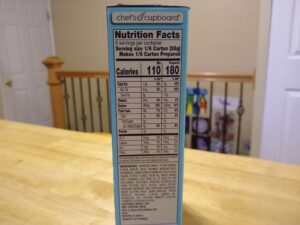 The primary ingredient is enriched wheat flour. Those with allergies should know the stuffing contains wheat and soy, and it may contain milk. It’s a product of Canada.

The stuffing can be prepared on the stove top or in the microwave. The box states it cooks in five minutes, and it requires the addition of 1 1/2 cups of water and 1/4 cup (half a stick) of butter.

To prepare on the stove top, heat 1 1/2 cups of water and 1/4 cup (half a stick) of butter to a boil (melt butter completely) in a medium saucepan. Stir in contents of the stuffing mix pouch. Remove from heat, cover, and let stand for five minutes. Fluff with a fork and serve.

To prepare in the microwave, mix contents of stuffing mix pouch with 1 1/2 cups of hot water and 1/4 cup (half a stick) of butter, cut into pieces, in a 1 1/2 quart microwave-safe bowl. Cover and microwave on high for five to six minutes. Fluff with a fork and serve.

Aldi’s Chef’s Cupboard Hawaiian Stuffing Mix uses Hawaiian rolls (or their dried and processed equivalent) in place of regular bread, which gives it a unique sweet flavor. It comes in two varieties: Classic Herbs & Spices or Sage & Onion. While I wouldn’t want to give up traditional stuffing, this is a fun variation to serve alongside other stuffings.