For a low-inventory grocery store, Aldi sells a good variety of turkeys during the holiday season. There are name-brand Butterballs and Honeysuckles, along with Aldi private label brands like the Never Any! Young Turkey. 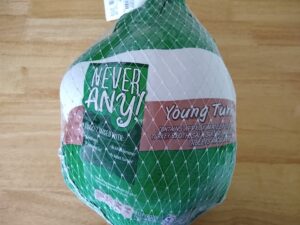 The Never Any! Young Turkey was sold frozen and cost $1.19 per lb. at the time of publication. The turkey I purchased weighed 11.18 pounds and cost $13.30. It’s an ALDI Find (Special Buy), which means it’s in stores for a limited time, and once it sells out, it’s gone until the next time.

For price comparison a Honeysuckle fresh (not frozen) turkey at Aldi also cost $1.19 per lb., while a frozen Simply Nature Organic Whole Turkey cost $2.99 per lb. A frozen Butterball whole turkey at Aldi was reduced from $1.29 per lb. to 87 cents per lb. at the time of publication, while a frozen Honeysuckle whole turkey was 59 cents per lb. at Aldi. So the Never Any! turkey is mid-range between a fresh organic turkey and a frozen conventional name-brand turkey.

The turkey also was raised on all-vegetarian feed, although that is not as wholesome or as natural as it sounds when we’re talking about poultry, and food blogger Clean Cuisine states:

“I have to admit, the sound of a ‘vegetarian-fed turkey’ certainly has a nice healthy ring to it, but here’s the deal: turkeys are not meant to be vegetarians! Turkeys need plenty of green pasture, but just like chickens, they also need complete protein and they need to be able to forage for worms, bugs and insects.”

The turkey has been brined with approximately a 9.5% solution of turkey broth, salt, sugar, and natural flavoring, and giblets are included. 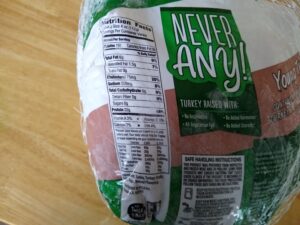 Never Any! Turkey nutrition information and ingredients. (Click to enlarge.)

Since it’s sold frozen, it will need to be defrosted before cooking. Turkeys should not be thawed on the counter at room temperature! Instead, place the turkey on a tray and keep it in the fridge to thaw for several days. The kitchn recommends about 24 hours in the refrigerator for every 5 pounds of turkey, so plan ahead in order to have a thawed turkey in time for your holiday meal. 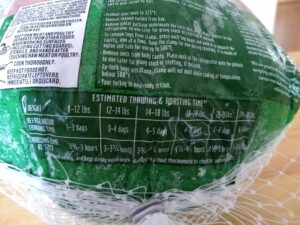 A chart on the Never Any! turkey package offers estimated thawing times:

Most of the Never Any! turkeys in my store seemed to be in the lower poundage ranges.

The package also has instructions for roasting the turkey: 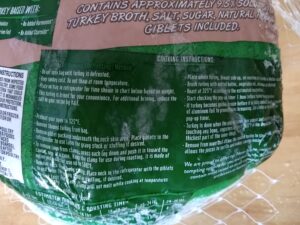 Preheat the oven to 325 degrees. Remove the thawed turkey from the bag. Remove the giblet package under the neck skin area. Place giblets in the refrigerator to use later for gravy, stock, or stuffing if desired.

To remove the turkey legs from the clamp, press each leg down and push it in toward the cavity, one at a time. Keep the clamp for use during roasting. It is made of nylon and is safe for use up to 500 degrees.

Remove the neck from the body cavity. Place the neck in the refrigerator with the giblets to use later for gravy, stock, or stuffing if desired.

Re-tuck legs into the clamp. The clamp will not melt while cooking at temperatures below 500 degrees.

Your turkey is now ready to cook. Place the whole turkey breast side up on a roasting rack inside a shallow roasting pan. Brush the turkey with melted butter, vegetable oil, and seasonings as desired.

A chart on the package provides roasting times based on weight in a 325-degree oven:

Start checking the pop-up timer 1 hour before the turkey is due to be done.

If the turkey becomes golden-brown before it is fully cooked, cover with a loose tent of aluminum foil to prevent over-browning. Cut a hole in the foil to view the pop-up timer.

The turkey is done when the pop-up timer has popped and a meat thermometer, not touching any bone, registers at least 165 degrees in the deepest part of the breast and the thickest part of the inner thigh.

Remove the turkey from the oven and allow the cooked turkey to stand for 20 to 30 minutes. This allows the juices to settle and makes carving easier. 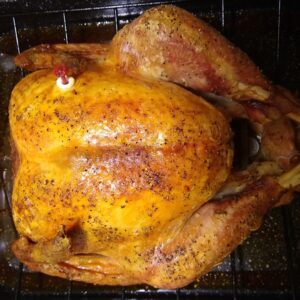 Our finished turkey. It was delicious!

When I roasted this turkey in Aldi’s Crofton Roasting Pan with Rack for my family, it came out perfectly. The clamp around the legs took a bit of fiddling with, but it worked okay. I brushed the outside of the turkey with plenty of butter and vegetable oil and sprinkled it liberally with salt and pepper. My turkey was just over 11 pounds, so I followed the roasting time recommendation for an 8- to 12-pound turkey, and it was done within that time frame, at 2 hours and 55 minutes. The skin was golden brown and crisp, and turkey was flavorful and moist.

The one thing I wondered about is where Aldi’s Never Any! turkeys are raised, as there is no indication on the packaging as to where they come from. I reached out to Aldi via their contact page with that question, and they stated:

“The majority of the products sold in our stores are manufactured in the US. In accordance with US labeling requirements, products made outside of the US have their country of origin clearly stated on the packaging. Products with no listed country of origin are from the US, however, they may contain one or more components made, manufactured or produced outside of the US.”

So, the turkey is from the United States, but we don’t know a specific location or farm that produced it.

Aldi’s Never Any! Young Turkey costs more than a traditional Butterball or Honeysuckle turkey, but they don’t use antibiotics when raising these turkeys, so that may make the higher cost worthwhile. Our Never Any! turkey turned out tender and flavorful, with a nice crisp skin. If you’re looking for a turkey that’s a step above the inexpensive basic ones, this might be your bird.