Little Salad Bar Half Sours Not Quite A Cucumber

Leave it to the German grocer to feature things I’ve never heard of before. 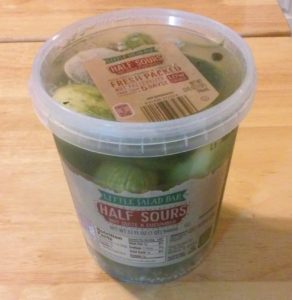 The Little Salad Bar Half Sours Not Quite A Cucumber (man, that’s a mouthful) comes in a plastic tub filled with what look like whole pickles. And they are physically whole, but they’re not pickles. Not exactly. Rather, they are little whole pickles that are not exactly pickles. They are half pickled. They also boast being fresh-packed, with no pasteurization, and claim to be freshly packed from farm to container in five days.

Nutritionally, they are really low in calories; only 5 calories per 1 ounce pickle. On the other hand, they do have some sodium: 770 mg of sodium per serving, or 7% of your daily recommended allowance. So while they’re a low-calorie snack or addition, they’re not without a few drawbacks, especially if your doctor says to go easy on the salt.

So how do they taste? Well, imagine mixing cucumbers and pickles together and you’ve got an idea. Honestly, it’s kind of weird. I’m not a huge fan of cucumbers, but I do like pickles. Because this is a little bit of both, I kind of have a love-hate relationship with this thing. I mean, the pickle part is good, but the cucumber part is a bit of a turnoff to me. It’s also worth noting that there is a bit of a texture difference, too; these taste a little more crisp than a traditional pickle, probably because they aren’t fully pickled!

If pickles are your thing, you may or may not like this.

If cucumbers are your thing, you may or may not like this.

But if you are a fan of cucumbers and pickles, then maybe this strange little product is just the thing for you.