Everyone, I think, has a sort of “bread history.” You may have grown up in a family where where you mostly ate white sandwich bread. You might have been more of a wheat bread family. Maybe your household was a mix or went with more upscale multigrain or niche bread types such as sourdough. Or perhaps you were in a family where gluten was a concern and you had either gluten-free bread (if it was available) or little or no bread at all.

Most families, though, eat some kind of bread. It’s considered a staple, alongside things like milk and eggs. My own family was a white sandwich bread family. We sometimes did wheat, too, but white bread was unquestionably the favorite. We all loved the taste.

While there is some debate, many experts argue that breads made with whole grains are better for you than white bread, which refines out many parts of the grain, including fiber and some nutrients. Some experts caution that this processing can elevate certain risks, including those for type 2 diabetes. So what’s a person to do if they still like the taste and texture of white bread?

One possible solution is whole grain white bread, which is formulated with the components of wheat bread but the texture of white bread. It’s potentially the best of both worlds, and the evidence seems to indicate it does the job on the nutrition front.

Several years ago, I spotted just such a bread at my local Aldi. But since Aldi products can and do change, I’ve decided to revisit the loaf. Does it still hold up? 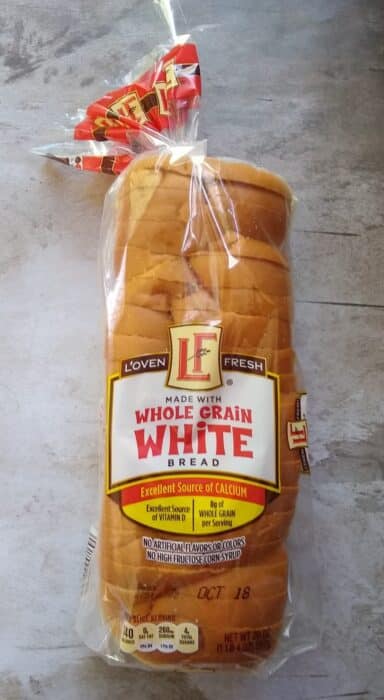 L’Oven Fresh Whole Grain White Bread is an Aldi Regular Buy. You can find it in stores all the time, among the other bread offerings. At the time of this post, the bread comes in a 20-ounce loaf and costs $1.69, or about 8.5 cents an ounce. That’s lower than every name brand I could find. What’s more, many national retailers don’t carry a house brand version of whole grain white bread, and those that do typically charge more. Right now, this is the best price I can find on whole grain white bread, and it has been that way for years.

Nutritionally, this bread matches what I’ve seen with other whole grain white bread. It’s got lots of carbs and a little fat, but also some dietary fiber and a wide selection of vitamins and minerals. As far as allergens go, the bag warns it contains soy and wheat and may contain eggs, tree nuts, and milk. 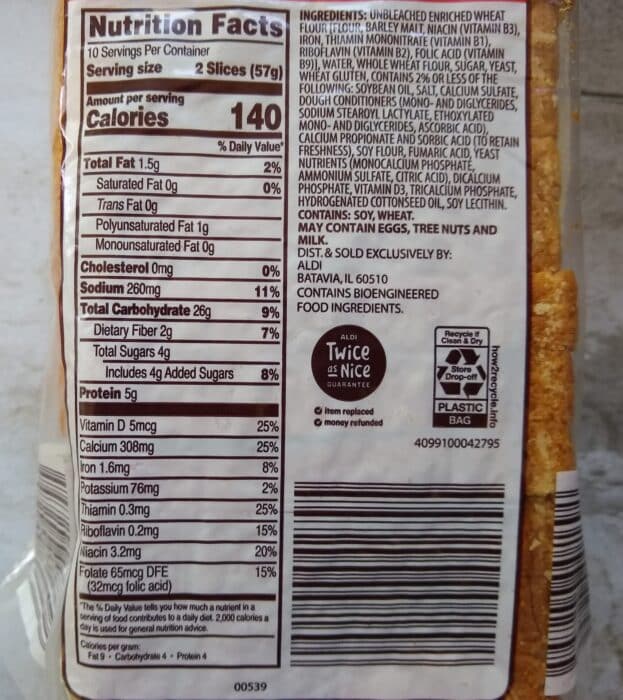 Our family has been using this bread for years, and it’s a favorite. The taste and texture is very close to white sandwich bread, and having that along with the benefits of whole grain makes it all the better. I’ve found it to hold up well with sandwiches — I think it is a little sturdier than some other white sandwich breads — without being too coarse, and the taste is spot-on. Whether it’s served as part of a sandwich or toast or whatever you need it for, this bread fits the bill reliably.

One of Aldi’s most consistently good staples, L’Oven Fresh Whole Grain White Bread is an inexpensive bread that combines the taste and texture of white bread and the benefits of whole grains. It’s durable without being too tough, and it works for whatever we need it for. Aldi suppliers don’t appear to have messed much with this bread over the years, and for the better. This remains one of our favorite Aldi products.