Cauliflower is a popular substitute for carbs these days. Aldi shows a lot of love for the vegetable, as indicated in the variety of cauliflower-based products the grocer has rotated through its shelves over the last few years. Products include cauliflower crust pizza, cauliflower crackers, cauliflower meals, riced cauliflower, cauliflower stuffing, cauliflower Tator Tots, and more. Most recently, Aldi introduced pizza snacks that look like Totino’s Pizza Rolls, but the crust is made of cauliflower. We love Pizza Rolls (despite their lack of real nutritional benefits) in our house, so we took a chance on Aldi’s attempt at a healthier version. 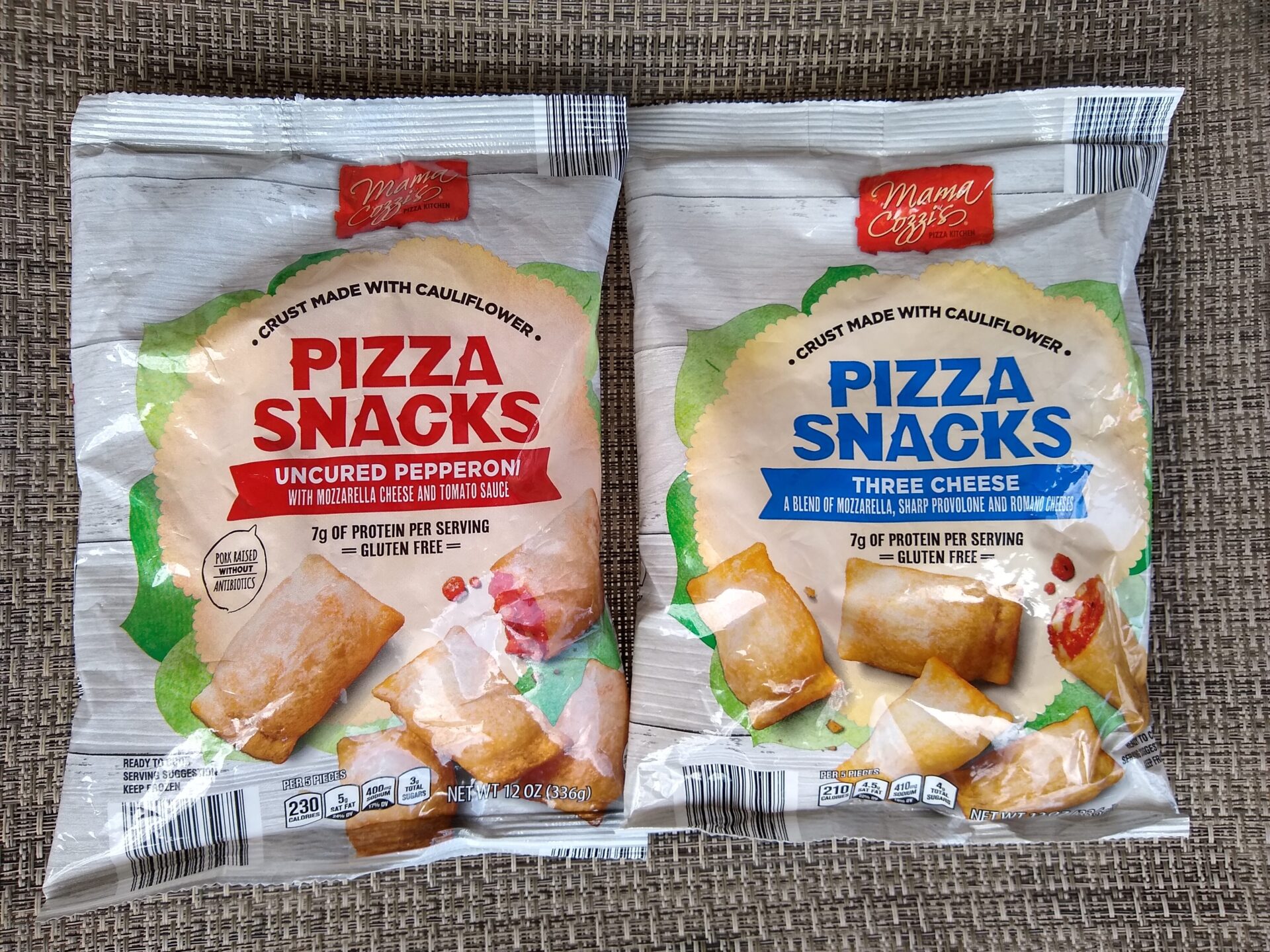 Mama Cozzi’s Cauliflower Pizza Snacks cost $4.99 for a 12-oz. frozen bag at the time of publication. They are Aldi Finds (Special Buys), which means they’re only going to be in stores for a short time, so get them while they last.

They are on the pricey side, especially considering that you can buy an almost 20-ounce bag of Totino’s Pizza Rolls for less than $4 from Walmart at the time of publication. However, you’re paying extra for a different kind of product here, since the crusts for the Aldi Pizza Snacks are made from cauliflower, while Totino’s crusts are made of wheat flour.

The Pizza Snacks come in two flavors: Three Cheese with a blend of mozzarella, sharp provolone, and Romano cheeses, or Uncured Pepperoni with mozzarella cheese and tomato sauce.

Both flavors are gluten free, and the pepperoni flavored Pizza Snacks contain pork raised without antibiotics. If you are on the lookout for potential allergens, these contain milk.

The ingredients lists are pretty lengthy but perhaps not filled with quite as many hard-to-identify ingredients compared to traditional name-brand Totino’s Pizza Rolls. You also get a small serving of vegetables, with cauliflower fairly high on the ingredients list. 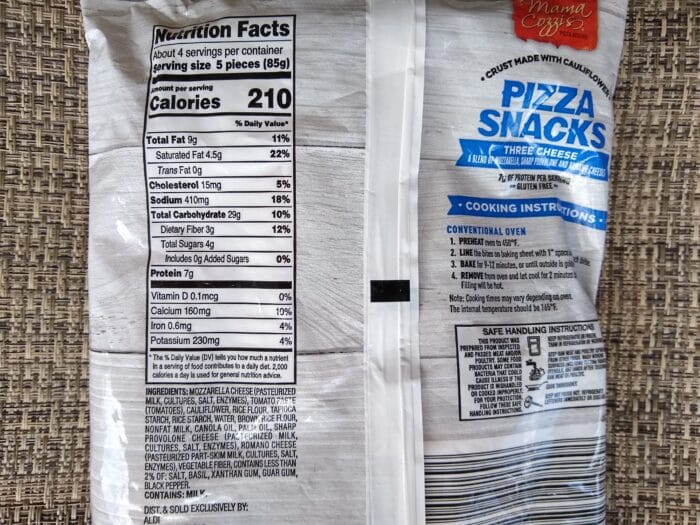 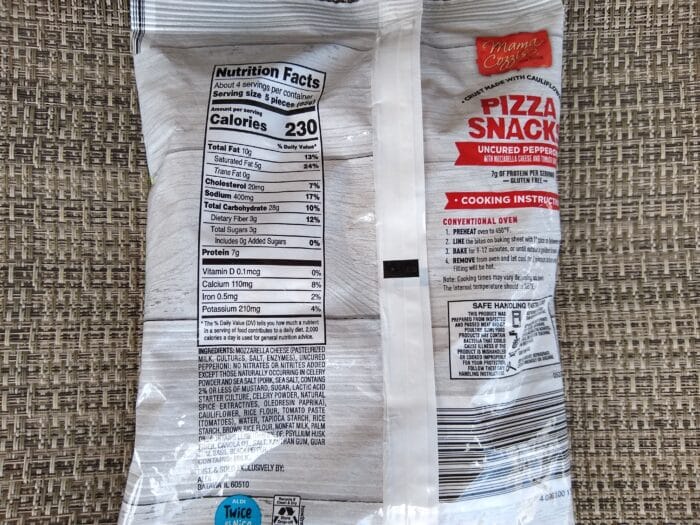 The bag gives only one method of preparation: baking in a conventional oven. To prepare the snacks, preheat the oven to 450 degrees. Line the bites on a baking sheet with 1 inch of space between each bite. Bake for 9-12 minutes or until outside is golden brown. Remove from oven and let cool for 2 minutes before serving. Be careful because the filling will be hot.

While there are no microwave directions, I’m guessing you could try cooking them that way. I’d arrange five or six Pizza Snacks on a microwave-safe plate and cook for about one minute. You might need to adjust the cooking time down or up, and I can’t make any guarantees as to how these will turn out in a microwave. If you try it, leave a comment and let us know how it goes. 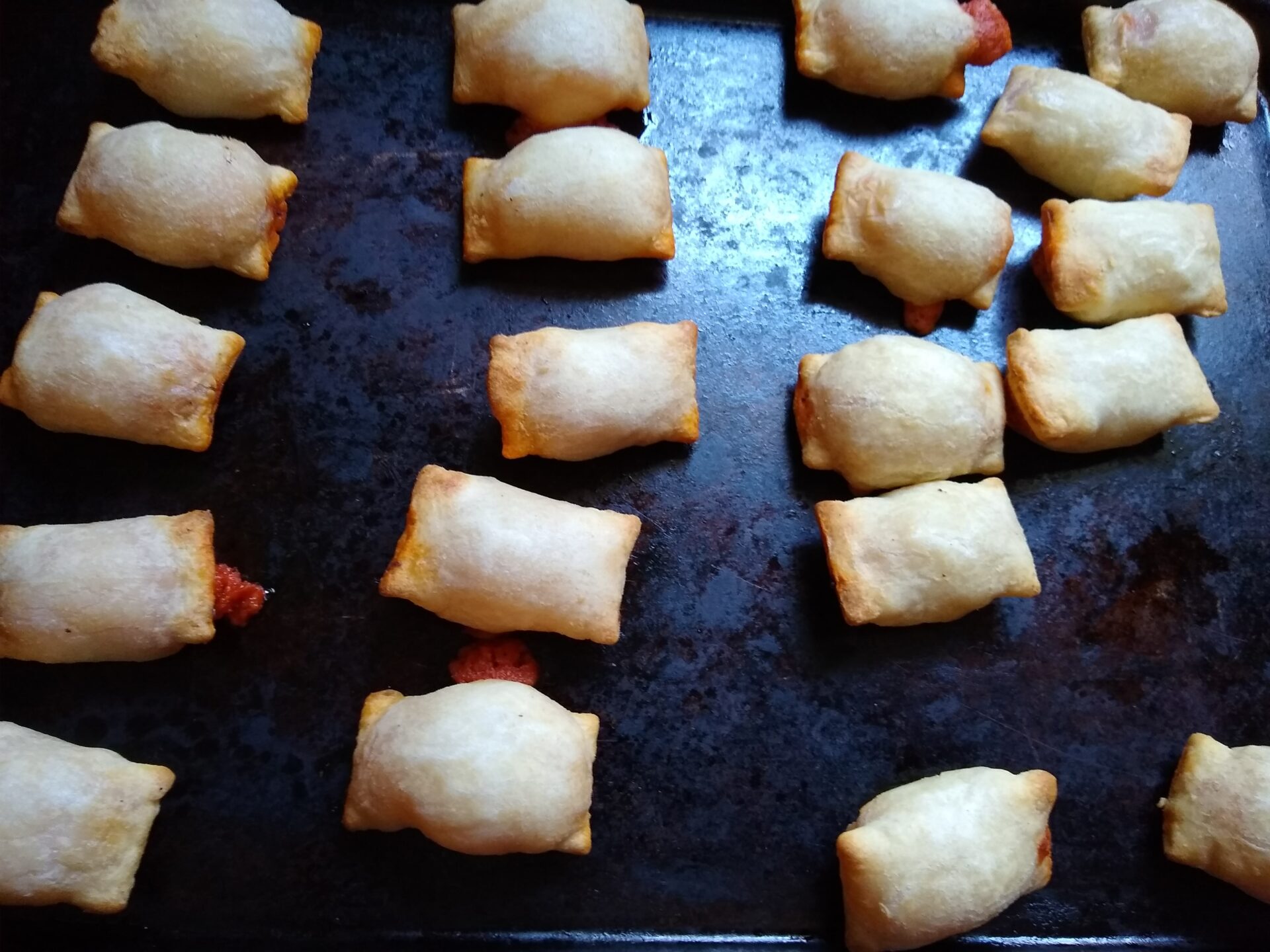 The Pizza Snacks after baking in the oven.

These have a somewhat different look than Totino’s Pizza Rolls. They don’t get as golden brown, and they have a softer, less crispy texture than Totino’s. Nevertheless, my family scarfed these down and asked for more. They were an instant hit. I detected a slight taste of cauliflower on the first bite, but no one else seemed to notice it. The Three Cheese flavor has lots of gooey cheese, while the Uncured Pepperoni flavor has plenty of zesty minced meat bits.

One downside is that they are a bit expensive, and you don’t get many pizza rolls, with one bag containing about four 5-piece servings, or about 20 Pizza Snacks. These were enough of a hit with my family, though, that I’ll probably buy them if I see them at Aldi again.

Aldi’s Mama Cozzi’s Cauliflower Pizza Snacks come in Three Cheese or Uncured Pepperoni flavors and feature a cauliflower-based crust, and they taste great. They have similar carbohydrate amounts to traditional Totino’s Pizza Rolls, so these are not a low-carb food, but you do get a small vegetable serving. They also are gluten free and might be a good option for people who can’t eat traditional pizza rolls.