EDITOR’S NOTE: This stuffing returned to Aldi for a limited time in November of 2020.

Cauliflower is having a moment. It’s a popular way to make a variety of meals lower in carbs. You see it in pizza crust, in crackers, as a substitute for rice, or as the base for an entire meal. The latest way cauliflower has shown up at Aldi is as a substitute for traditional bread-based stuffing. 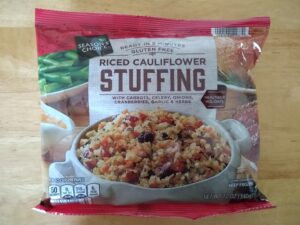 Season’s Choice Riced Cauliflower Stuffing cost $2.39 at the time of publication. It’s a limited-time Aldi Find (Special Buy) product that will only be in stores for a short time. Because Aldi does not offer online ordering in the U.S., after this sells out at your local store, it’s gone until next year.

The package says that in addition to the riced cauliflower, this contains carrots, celery, onions, cranberries, garlic, and herbs for “healthier holidays.” It’s a product of Italy, and the package says it’s ready in 8 minutes and is gluten free. 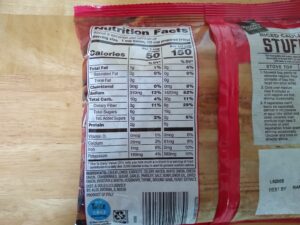 The stuffing can be prepared on the stove top or in the microwave.

To prepare on the stove top, squeeze the bag gently to separate the veggies, and then pour the contents into a large nonstick skillet. Cook over medium heat 8 minutes or until veggies are hot, stirring occasionally.

(If the vegetables can’t be easily separated, defrost in the microwave or pour into a skillet and cook, covered, over medium-high heat 3 minutes or until vegetables break apart, stirring occasionally. Uncover and cook as directed above.)

To prepare in the microwave, place the unopened bag standing up in the center of the microwave. Microwave on high for 3 minutes. Open the bag carefully and stir well. Do not reseal. Microwave for an additional 3 minutes or until hot. Let stand 1 minute in microwave, and then carefully remove the bag. 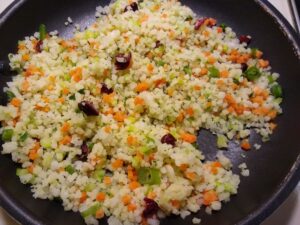 The stuffing heating in a skillet on the stove top.

I heated this stuffing on the stove top. A few things stood out to my family when we tried it with some oven-roasted chicken.

First, the seasoning blend is a spot-on imitation of what traditional bread stuffing tastes like. They got that part right. I was a little unsure what I’d think of the cranberries in the mix because the stuffing I typically make doesn’t have them, but there weren’t that many cranberries and I thought it tasted fine.

Second, the texture and mouthfeel are not in any way close to traditional bread-based stuffing. It’s primarily riced cauliflower and minced carrots, so there’s no surprise there, and I doubt people who are wanting a lower-carb option are going to expect it to be just like bread stuffing. Some family members described this as “slimy,” but I didn’t think it was bad.

Third, I appreciate that the ingredients in this stuffing are easily identifiable for the most part, with one possible exception being the yeast extract. Otherwise, it’s lots of veggies, herbs, and seasonings.

Fourth, just because this is cauliflower-based does not mean this is a healthier product than traditional bread-based stuffing. The first thing I noticed when looking at the nutrition information is that this product contains a ton of sodium, coming in at 62% of your daily value, or more than half your daily allowance of sodium.

I pulled a few traditional stuffing box mixes out of my pantry to compare the nutrition numbers.

Based on the nutrition numbers, the riced cauliflower stuffing is slightly lower in calories and fat, but it has about triple the amount of sodium compared to traditional stuffing. It’s also higher in carbs, although it has more dietary fiber than the traditional stuffings, so that may help to negate some of the carbs. I’m guessing most of the carbs come from the carrots, cranberries, and added sugar, but I am not an expert when it comes to counting carbs. So while this riced cauliflower stuffing is advertised as a healthier product because it doesn’t contain wheat or bread products, it may not be as low-carb or low-calorie as you might think, and it’s definitely not low-sodium.

I don’t know that I would buy this again. I thought it tasted okay and I liked all the vegetables and seasonings, but my family and I prefer regular stuffing, and since this product appears to have some health trade-offs, I think it’s okay to stick with eating the bread version in moderation for now.

Aldi’s Season’s Choice Riced Cauliflower Stuffing tastes like stuffing, although it not surprisingly does not have the texture of traditional bread stuffing. It contains plenty of veggies and easily recognizable ingredients, and the package markets it as a product for “healthier holidays,” but a comparison of nutrition information between this and regular bread-based stuffing indicates that while the riced cauliflower stuffing is lower in fat, it has about triple the amount of sodium. It’s got only slightly fewer calories than regular stuffing, and it has a higher carb count than regular stuffing, although it does have more dietary fiber that may negate some of the carbs, but it still may not be as low-carb as one might hope.