EDITOR’S NOTE: This pizza has been modified for the 2021 fall season and now features marinara sauce instead of butternut squash sauce. Read our full review of the updated Mama Cozzi’s Halloween Pumpkin Shaped Pizza here.

When it comes to novelty holiday foods, Aldi knows how to impress. During the Halloween season, Aldi’s creativity shines through the most with its cheeses — with offerings such as Freaky Franken Derby cheese with sage or Scary Pumpkin Spice Wensleydale — but this year it also introduced a pumpkin-shaped pizza sure to catch the eyes of revelers everywhere.

Mama Cozzi’s Halloween Pumpkin Shaped Pizza cost $3.99 for an 8.11-oz. pizza at the time of publication.

This pizza is an Aldi Find (Special Buy), which means it’s only in stores for a short time, and once it’s gone, it’s gone.

This is not your typical pizza. That’s not only because it looks like a jack-o-lantern. It’s also because it doesn’t have traditional tomato-based pizza sauce. Instead it has a butternut squash sauce.

The pizza wrapped in plastic wrap, after taking it out of the box.

The pizza is from Italy and is sold frozen. The box describes it as “a crispy crust topped with a creamy butternut squash sauce, cheddar cheese, mozzarella eyes and a mascarpone cheese sauce.”

This does contain wheat, milk, and egg. It may also contain soy.

One box contains only one serving, which makes this a bit on the pricey side for a pizza. However, it’s a large serving. You could easily split this pizza with someone else and serve a small side salad for a full meal. Splitting it would reduce calories as well as its high sodium content. 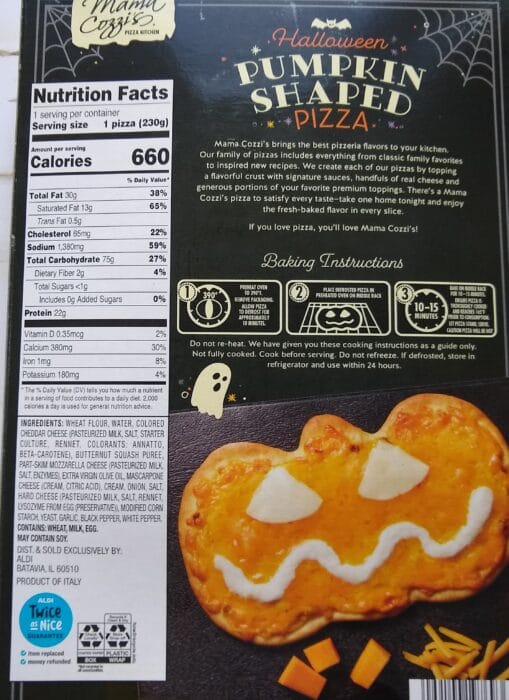 Preheat your oven to 390 degrees Fahrenheit. Remove the pizza from packaging and allow it to defrost for approximately 10 minutes. Place the defrosted pizza in the preheated oven on the middle rack. Bake for 10-15 minutes. Ensure the pizza reaches 165 degrees before serving.

The box says that if the pizza is defrosted, it should be stored in the refrigerator and eaten within 24 hours.

My pizza baked in about 12 minutes in my own oven. It definitely came out looking cute. 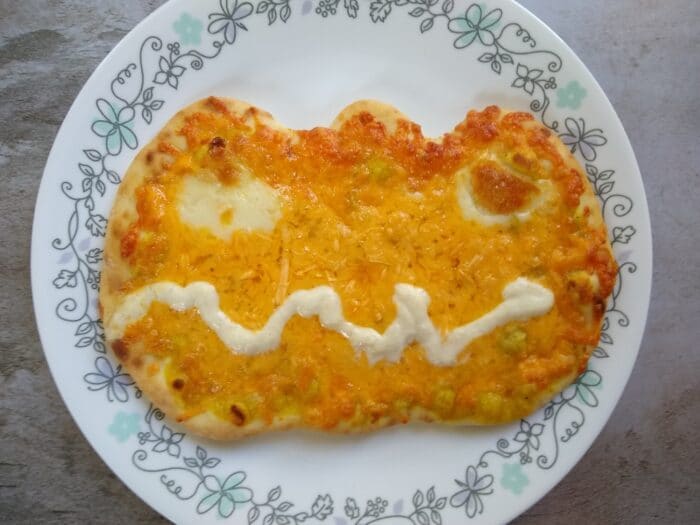 I cut it into smaller portions for my family to try, and I didn’t tell them ahead of time that it has butternut squash sauce rather than traditional pizza sauce because I wanted them to judge the pizza without any preconceived notions about the sauce.

My family was split on this pizza. Half of them said they didn’t care for it or that it wasn’t their thing, and they didn’t finish their slices. The rest of us, including me, thought it was okay. The sauce tastes vaguely vegetable-like, but I’m not sure it screams squash. I didn’t think this unusual pizza tasted bad. It all depends on how much you like fall vegetables.

Because my family didn’t all like this pizza, the next time we want a pumpkin-shaped pizza, I’ll probably make it homemade with regular pizza sauce and an Aldi yeast packet, which includes a pizza crust recipe.

Mama Cozzi’s Halloween Pumpkin Shaped Pizza is imported from Italy and features a creamy butternut squash sauce instead of traditional tomato-based pizza sauce. It’s a decent — if small — pizza, but how much you like it will depend on whether you like squash.