There is nothing quite like homemade bread. While it takes some time and labor, kneading dough is a great way to naturally reduce stress and keep your hands busy, and there’s that satisfying carby payoff when your baked goods come out of the oven. This is a time when home baking is really taking off, and Aldi sells the supplies you need to make a loaf, a pan of cinnamon rolls, a pizza crust, or whatever other baked goods you’d like to craft in your own kitchen. 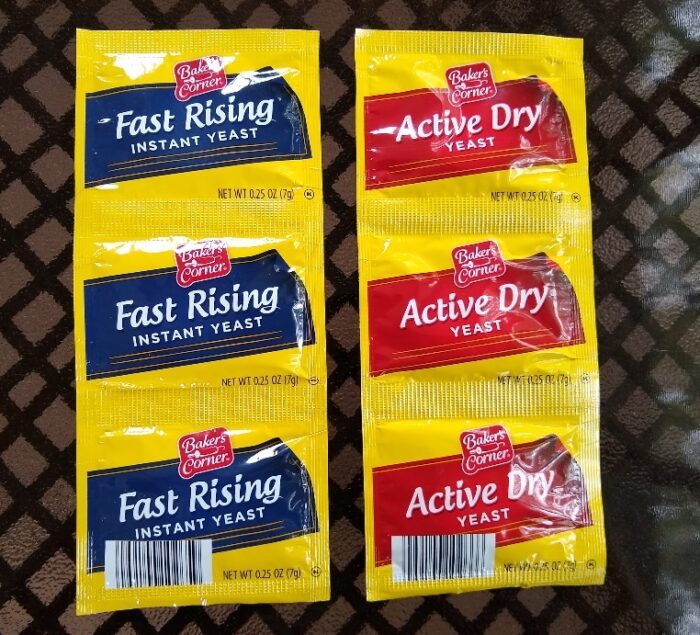 Baker’s Corner Yeast cost $0.89 at the time of publication for a package containing three 0.25-oz. (7-gram) envelopes. Yeast is a Regular Buy at Aldi, meaning it should be in stock year round. It’s found among the other baking supplies like flour, sugar, and spices. (Because of the times we live in, my local Aldi stores have had trouble keeping yeast on the shelves, but they restock often, so keep looking and you’re likely to eventually score some.)

Both varieties are certified kosher and are naturally gluten free. Ingredients are yeast and sorbitan monostearate. The Fast Rising Instant Yeast also has ascorbic acid. Both yeast varieties are a product of Turkey. They should be stored in a cool, dry place and used by the “best before” date printed on the package. The yeast packets I purchased in May of 2020 had a “best before” date of September of 2021, so they last a while.

Here’s a closer look at the two varieties: 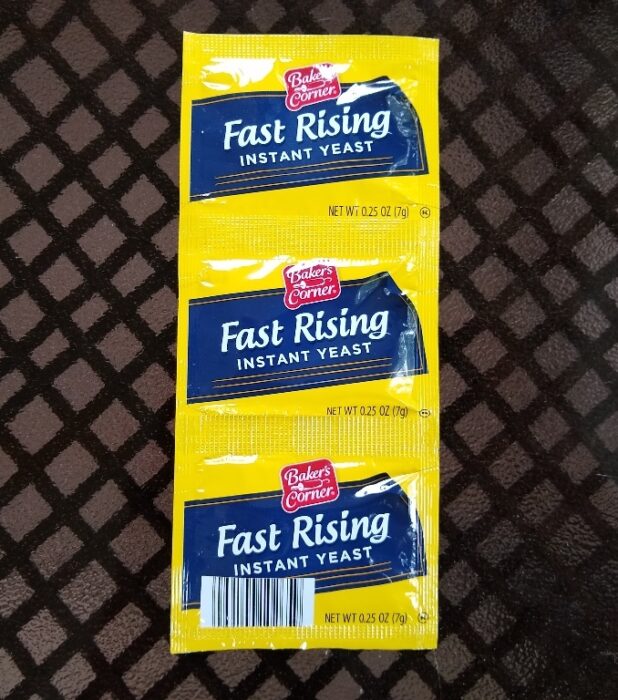 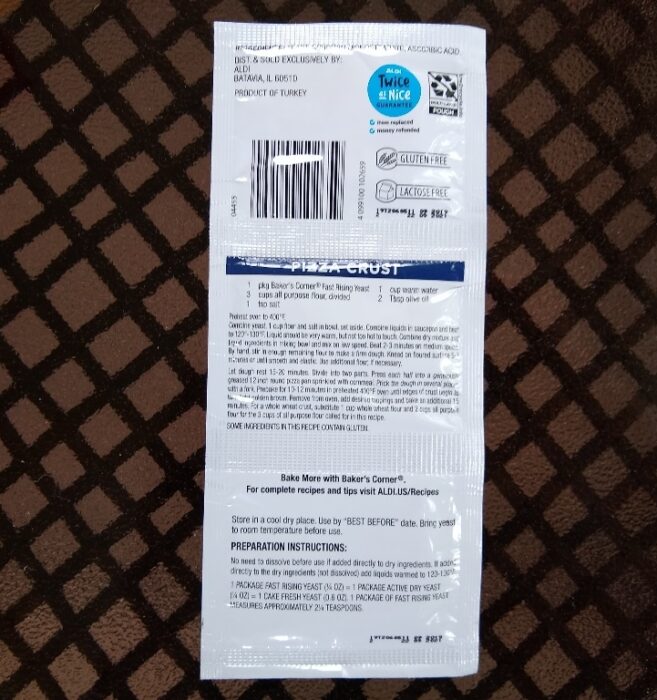 I used Aldi’s fast rising instant yeast to make some homemade hamburger buns for pulled pork sandwiches, and they turned out well, rising as expected and baking up golden and flaky.

The package has a recipe for pizza crust, which I tried and my family heartily approved of. The pizza dough was easy to mix up, needed a minimal amount of time to rest or rise, and baked well in the oven. I used shredded mozzarella cheese and pepperoni from Aldi, and I used a can of pizza sauce from a different grocery store because my local Aldi stores do not usually carry cans or jars of pizza sauce (although I have seen Aldi sell ready-to-bake pizza crusts that come with sauce packets). 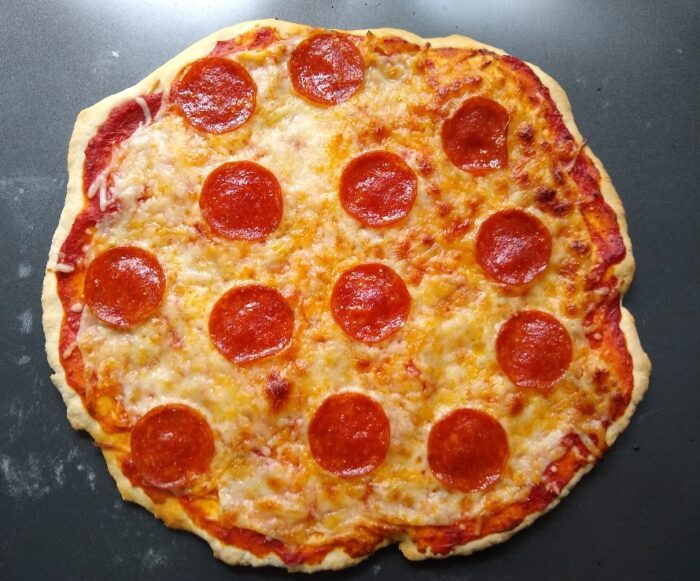 The pizza crust recipe is as follows:

Preheat oven to 400 degrees Fahrenheit. Combine yeast, 1 cup of flour, and salt in a bowl, and set aside. Combine liquids in a saucepan and heat to 120-130 degrees. Liquid should be very warm, but not too hot to touch. Combine the dry mixture and the liquid ingredients in a mixing bowl and mix on low speed. Beat 2-3 minutes on medium speed. By hand, stir in enough remaining flour to make a firm dough. Knead on a floured surface 5-7 minutes or until smooth and elastic. Use additional flour if necessary.

Let the dough rest 15-20 minutes. Divide it into two parts. Press each half into a generously greased 12-inch round pizza pan sprinkled with cornmeal. Prick the dough in several places with a fork. Prebake for 10-12 minutes in a preheated oven at 400 degrees, until the edges of the crust begin to turn light golden brown. Remove from the oven, add desired toppings, and bake an additional 15 minutes. 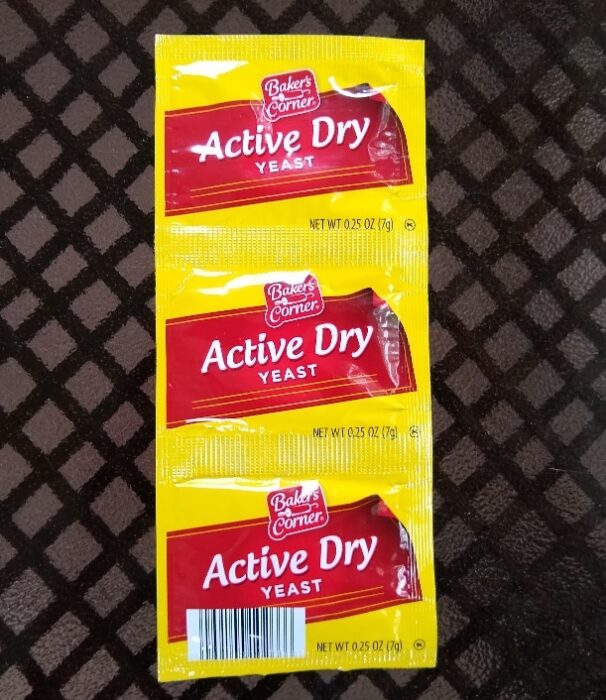 To prepare the Active Dry Yeast, dissolve in warm water (100 degrees Fahrenheit) for 10 minutes before mixing with other ingredients. If added directly to the dry ingredients (not dissolved), add liquids warmed to 120-130 degrees Farenheit. 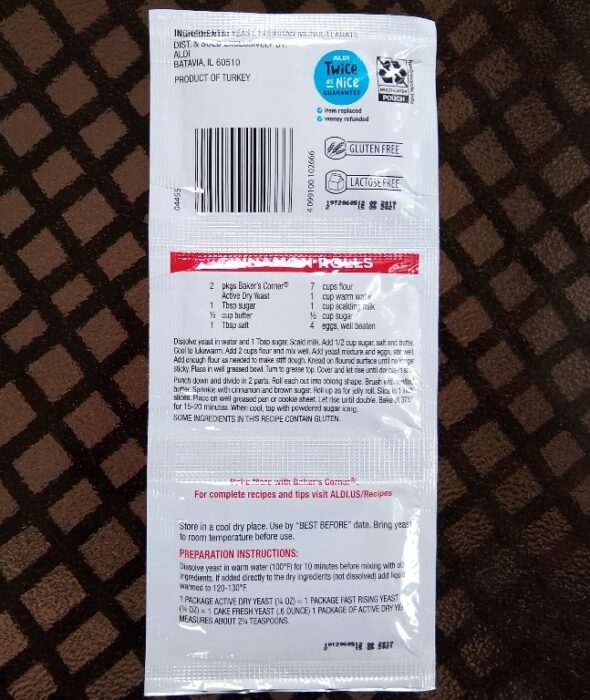 The package has a recipe for cinnamon rolls. They are amazing and I highly recommend making them. They’re light, fluffy, and better than any canned cinnamon rolls you’ve ever eaten. 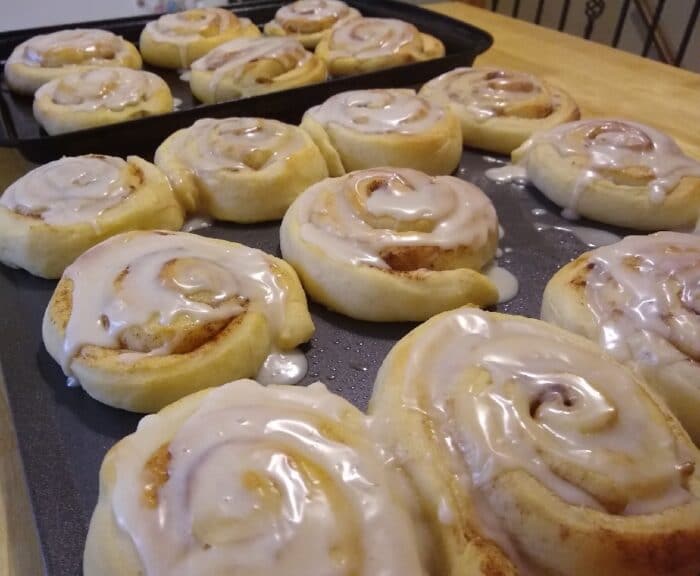 Before I share the recipe here, I’ve got a few thoughts on the baking process as it relates to this specific recipe:

The cinnamon roll recipe is as follows:

Punch down and divide dough in two parts. Roll each out into an oblong shape. Brush with melted butter. Sprinkle with cinnamon and brown sugar. Roll up as for a jelly roll. Slice into one-inch slices. Place on a well-greased pan or cookie sheet. Let rise until double. Bake at 375 degrees for 15-20 minutes. When cool, top with powdered sugar icing.

(The recipe does not tell you how to make powdered sugar icing, but it’s easy to make, and here are instructions.)