In the fall of 2020, Aldi sold a pumpkin shaped pizza. It sounded good in theory, but it didn’t have your typical pizza ingredients. Specifically, it had a butternut squash sauce instead of traditional tomato-based pizza sauce. My family gave it a try, but because no one in my household is a fan of squash, the pumpkin shaped pizza fell a bit flat with us.

Then, this fall, in 2021, Aldi reintroduced the pumpkin shaped pizza, this time totally changing the toppings. The new pizza has marinara sauce and no squash. So I decided to give it another try. 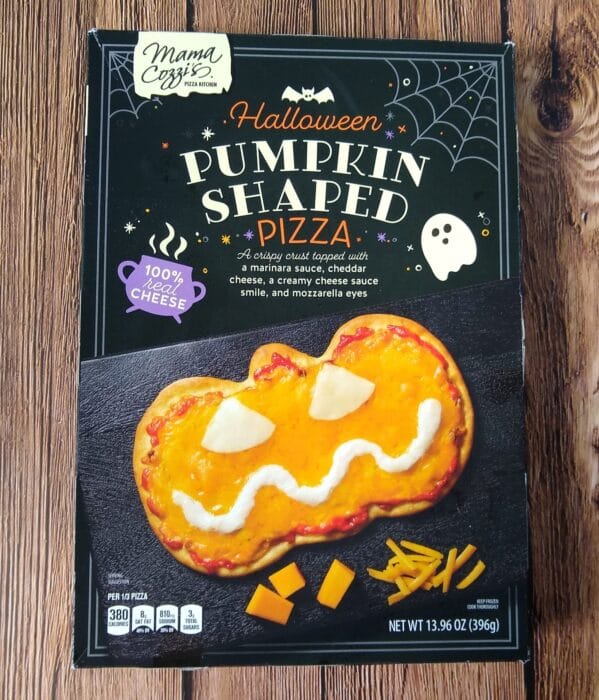 Mama Cozzi’s Halloween Pumpkin Shaped Pizza cost $4.99 for a 13.96-ounce pizza at the time of publication. In addition to having different toppings, this year’s pumpkin pizza is also more than 5 ounces larger than last year’s pizza, so you’ll be able to feed more people with it. It was sold alongside another limited-time special, the Mama Cozzi’s Halloween Ghost Shaped Pizza. Get both for a fun Halloween-themed meal. Both pizzas are products of Italy.

This pumpkin shaped pizza is an Aldi Find, which means it’s only in stores for a short time. (No, Aldi won’t ship it to you after it sells out at your local store.) 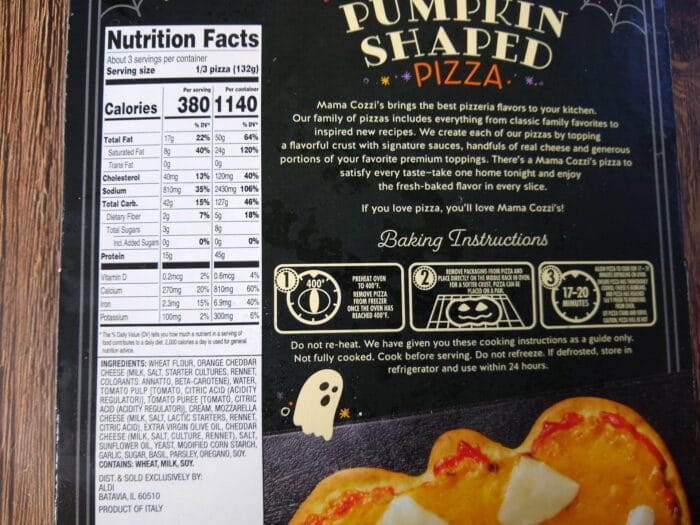 The box has instructions for baking in a conventional oven. Preheat your oven to 400 degrees Fahrenheit. Remove the pizza from the freezer once the oven has reached 400 degrees. Remove packaging and place the pizza directly on the middle rack in the oven, or for a softer crust place it on a pizza pan. (I use a metal pizza pan with holes.) Bake for 17-20 minutes until cheese is bubbling and the pizza has reached a temperature of 165 degrees. 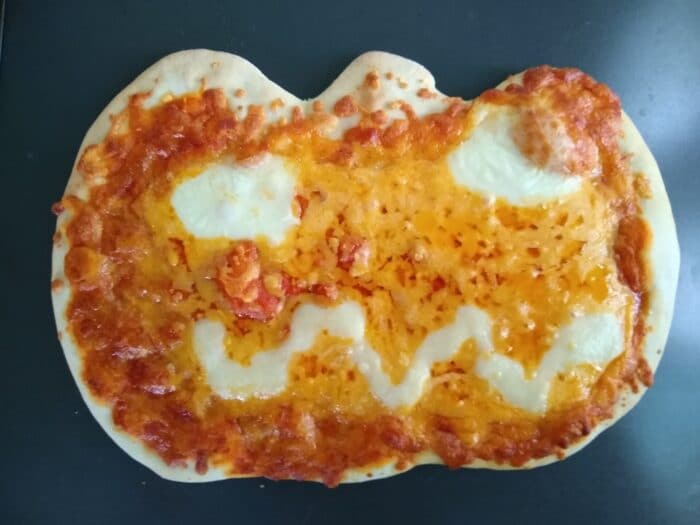 The pumpkin shaped pizza after baking.

This pizza was done in my oven after about 17-18 minutes. The cheeses ran some during baking, so the jack-o-lantern effect was somewhat diminished but still there. This is a solid pizza in terms of taste. The marinara sauce is what you’d expect on a pizza, and the cheddar cheese gives the pizza a stronger taste compared to pizza topped with traditional mozzarella. Overall, the flavor combination works. Serve this alongside the Mama Cozzi’s Halloween Ghost Shaped Pizza to complete your pizza night.

Mama Cozzi’s Halloween Pumpkin Shaped Pizza features a pumpkin-shaped crust topped with marinara sauce and cheddar cheese, with mozzarella “eyes” and “mouth.” The crust is crisp, and the red sauce and the cheeses complement each other well. If you’re looking for a way to add some fun to lunch or dinner time, we recommend this pizza.