Aldi sells some pretty decent pizza and Italian-inspired fare. We’re fans of their stuffed crust pizza, and we’ve seen fans describe their take and bake pizzas as being as good as or better than restaurant pizza. So when stromboli showed up in a recent Aldi ad, we decided to try them.

Stromboli is a type of turnover filled with cheese and meat, and it’s usually made with Italian bread dough or pizza dough. It’s similar to calzones, but the key difference is that calzones are folded into a crescent shape after being stuffed, while stromboli is rolled or folded to make a cylinder shape. 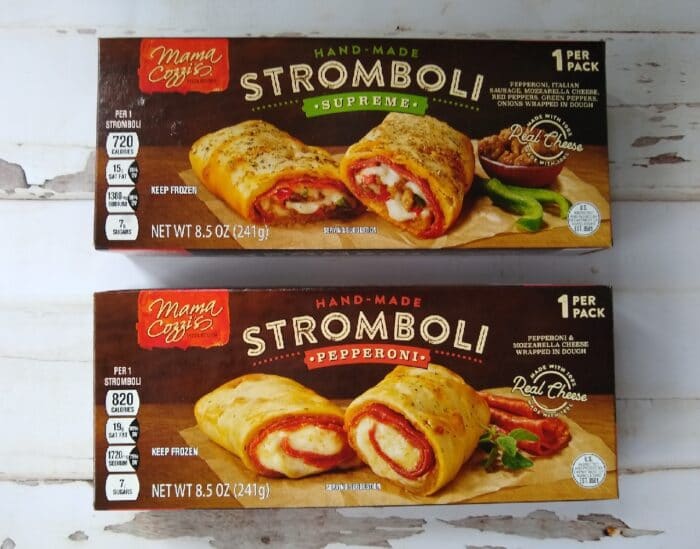 Mama Cozzi’s Stromboli cost $2.99 for an 8.5-ounce package containing one large serving at the time of publication. It was sold in two varieties: pepperoni or supreme.

This is an Aldi Find (Special Buy), which means it’s only in stores for a short time. Stores generally get only one shipment of specials, and once they sell out, they’re gone and you can’t order them online either.

These are loaded with calories, fat, saturated fat, cholesterol, sodium, and all sorts of things that aren’t good for you, so they might be good to split with someone else. (See the full nutrition info farther down in this post.)

If you’re avoiding allergens, both varieties of this stromboli contain wheat, milk, soy, and egg.

These can be heated from frozen in a conventional oven or in the microwave.

To microwave, remove the product from the box. Leave the film bag on the stromboli, but puncture the bag to vent. Place the stromboli in the center of the microwave and heat on high for 2 1/2 minutes. Remove from the bag immediately and serve. If thawed, microwave for only 1 minute and 45 seconds.

For fastest results, you can defrost these overnight in the fridge and then cook them from thawed. Use the regular oven for a crispier crust and always bake in the special “ovenable” bag.

I heated our stromboli in the oven. The film bags puffed up in the oven, and I worried about the bags bursting open, but when I gently touched them after baking, they simply deflated. 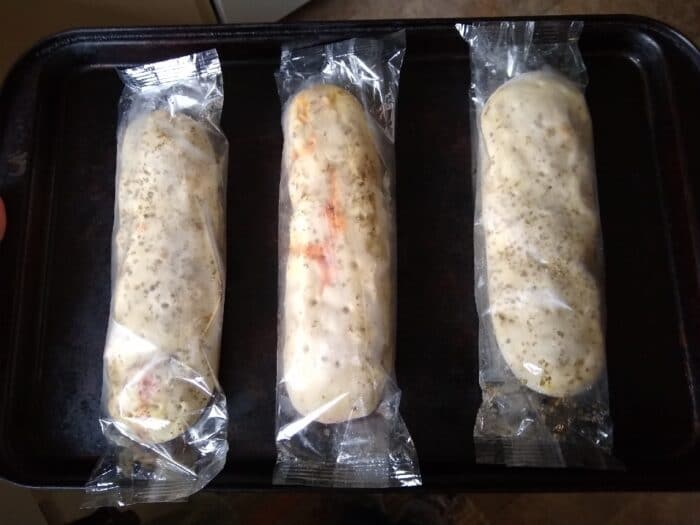 Stromboli in the “ovenable” bags they bake in.

The crust never got as golden brown as I expected it to, but it did have a good chewy texture and was very lightly crisp on the outside. These also drip some grease as you’re eating them (especially the pepperoni variety), so keep a few napkins handy.

Keep reading for more info on each variety. 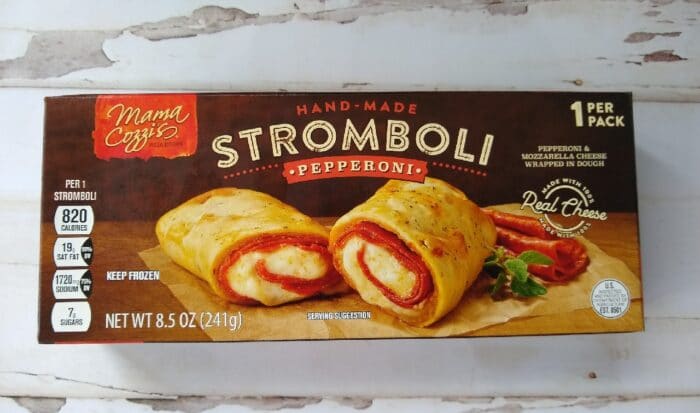 The box describes this as pepperoni and mozzarella cheese wrapped in dough. 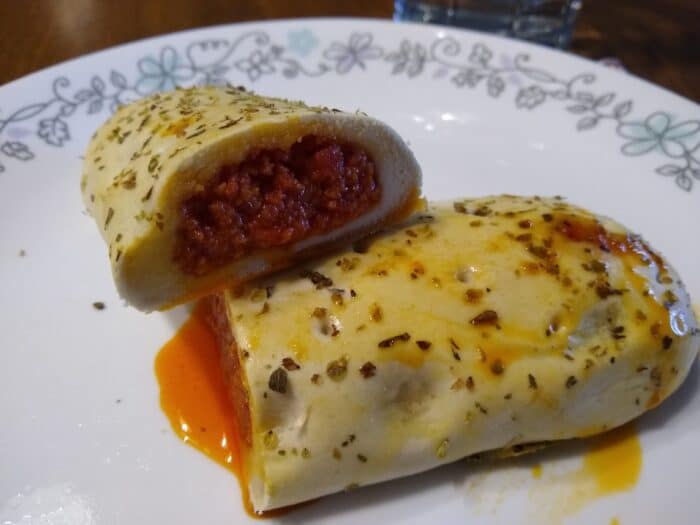 Based on the picture and description on the box, my family was looking forward to a bready pouch stuffed with meat and cheese. What we got was bread stuffed only with meat. We couldn’t see or taste any cheese. The meat mixture is also on the spicy side, which you may or may not like depending on your taste preferences. One of my kids said the best part was the bread. In short, we found this to be a bit disappointing. 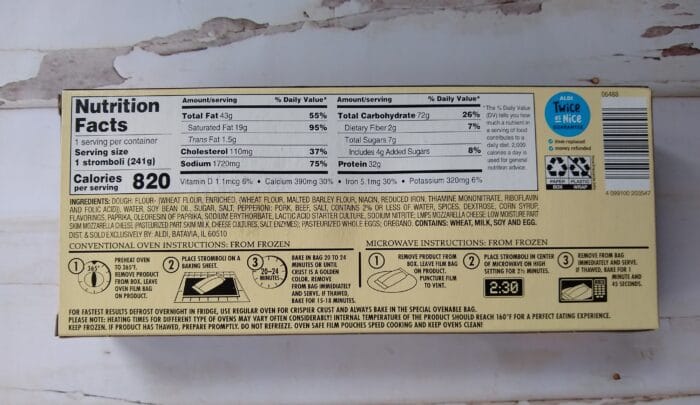 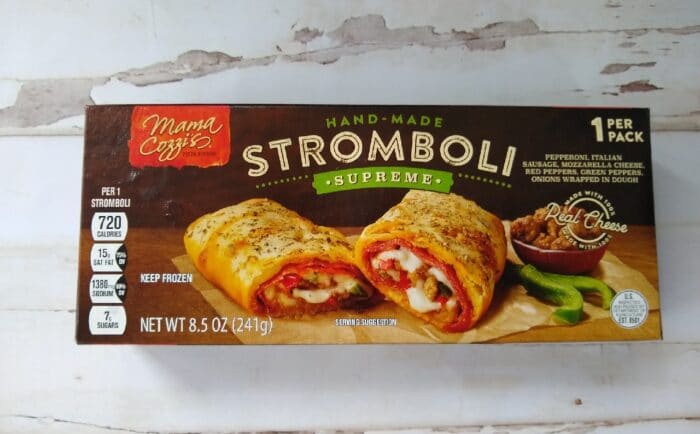 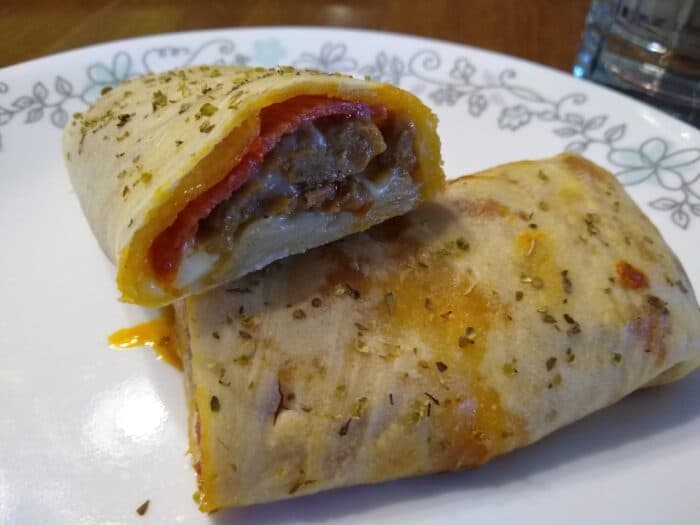 If you really like peppers and onions, you might not like that this is a little light on the veggies, but that also made it more appealing to picky kids in our household who ate this up. This had a nice balance of gooey cheese, slices of pepperoni and chunks of sausage with a scattering of veggies, and everyone thought it tasted very good. If it wasn’t so unhealthy in terms of sodium and fat, I’d buy it again. 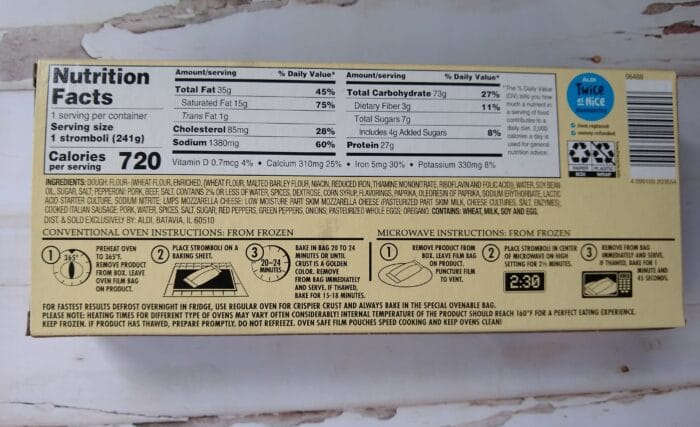 Mama Cozzi’s Stromboli comes in pepperoni and supreme varieties, and the two are worlds apart. The supreme stromboli tastes excellent and is loaded with meat, cheese, and some (but not a lot of) veggies. The pepperoni stromboli is filled with ground pepperoni, but we couldn’t see or taste any cheese. These are full of fat, cholesterol, and sodium, so we don’t suggest eating them all the time, but if you’re going to buy them we recommend the supreme.