Anyone who has perused the pizza lineup at Aldi knows that they generally come in two kinds: frozen and take-and-bake. Frozen has the advantage of lasting longer before you have to cook it, while take-and-bake usually means fresher ingredients and an overall better taste.

Most of the take-and-bake options are pretty standard stuff — cheese, pepperoni, supreme — but every once in awhile Aldi drops something altogether different: 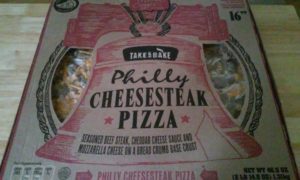 Mama Cozzi’s Take & Bake Philly Cheesesteak Pizza comes in the typical cardboard box in the refrigerated section of the store. Running $8.49, it’s one of the most expensive pizzas we’ve seen at Aldi, but at 16 inches it is the largest pizza Aldi sells and one of the largest store-bought pizzas we’ve bought anywhere. Like other take-and-bake pizzas, this pizza is meant to be refrigerated, and should be cooked within a few days or purchase. (We usually find cook-by dates on a sticker along the side of the pizza.)

The cooking instructions call for preheating the oven to 375 degrees, then cooking for 16-18 minutes. This pizza posed some particular challenges for us for two reasons: 1) because it was larger than any pizza crisper or baking sheet we currently own, and 2) because it filled most of our modest-sized wall oven. We worried about burning the sides of the crust left exposed over the oven, so we dealt with the problem by rotating the pizza 90 degrees after 6 minutes, and then checking it after 12. We’re glad we did, because it helped to keep the edge of the crust more evenly cooked, and we ended up pulling the pizza after 14 minutes, earlier than the instructions called for. We don’t have to do that with every pizza, but if your situation is at all similar to ours, we recommend keeping a close eye on the pizza.

Up to this point the best store-bought Philly cheesesteak pizza I’ve had is the Sam’s Choice version from Walmart; I found this pizza to be comparable to the Sam’s Choice. In other words, it’s excellent. The crust has a nice flaky taste and the cheese, steak, and onions all come together wonderfully.

Mama Cozzi’s Take & Bake Philly Cheesesteak Pizza is a fine dish for those who like this kind of pizza, with quality ingredients atop a tasty crust. It’s also a large pizza, so note our suggestions above if your oven isn’t very big. Otherwise, recommended.