I love stuffed crust pizzas. Love them. And, of course, I’m a big fan of Aldi. But, until recently, I’d never seen the two together. Aldi certainly hasn’t lacked for pizza variety — they do frozen, thin, thick, take-and-bake, you name it — but it seemed stuffed crust was too niche for them. Instead, we’ve had to get our fix either through other grocery stores or the occasional Pizza Hut run.

At the same time, we’ve discovered that, if you wait long enough, Aldi usually tries its hand at most things a larger grocery chain carries, even if only as a temporary Special Buy. 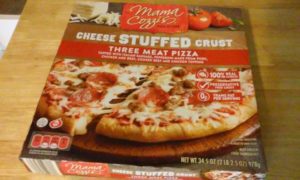 Mama Cozzi’s Cheese Stuffed Crust pizza is a Special Buy, and it comes frozen. At the time of this post, it came in pepperoni and three-meat varieties; we went with the three meat. In our area, the pizza is a couple of dollars less than any other stuffed crust we’ve seen.

Nothing surprising on the cooking instructions. The oven is preheated to 400 degrees, and the pizza goes directly on the rack. (For those who don’t like the mess this creates, we recommend a good cooking stone or a “pizza crisper,” which is a pizza pan with holes in the bottom. We are particular fans of the crisper, which does what it claims and we think is easier to clean up than the stone.) The pizza takes a fair amount of time to cook: about 21-23 minutes, which is typical for stuffed crust pizzas we’ve made before.

My biggest concern was the cheese in the crust; namely, would there be enough? I didn’t take precise measurements, but it seems to me that the pizza has about the same amount of cheese in the crust as a DiGiorno stuffed crust or the like. The rest of the pizza is vintage Mama Cozzi’s: a solid frozen pizza, with pretty good ingredients, a decent (if unspectacular) crust, and an overall good taste.

If you like stuffed crust pizza, this is a no-brainer. The pizza ingredients are on par with other Mama Cozzi’s pizzas and the stuffed cheese crust tastes as good as its frozen competitors. It probably won’t displace what you can get from a delivery guy, but at half the price of a restaurant, you might not care. Recommended.