We have to admit that one of the more impressive things Aldi has pulled off in recent years is its selection of ethnic foods. I mean, I’m happy enough that Aldi sells a decent burger and fries, but the way the grocer has been able to weave in Mexican, Indian, Chinese, and (of course) German food only does that much more to strengthen Aldi’s reputation as being more than you would expect a low-inventory store to be.

On that note, I was quite curious to wander into Aldi not long ago and spot, of all things, duck sitting on Aldi’s freezer shelves. I’ve had duck on a couple of occasions, courtesy of Chinese takeout, so the chance to see what Aldi brought to the table was a deal I couldn’t pass up. 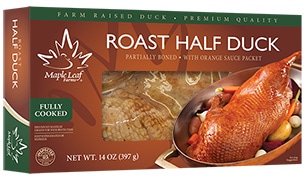 Maple Leaf Farms Roast Half Duck, it should be said, is not an Aldi exclusive. It can be found in other stores, including a handful of regional grocers in our area. We found it in Aldi’s frozen section, with other Seasonal Items. The net weight is 14 ounces, although that also includes the bone, so the actual meat is less than that.

The instructions call for thawing the duck in the refrigerator overnight, so be sure to do that ahead of time before you cook it. From there, the cooking instructions call for either oven or grill. To cook it in the oven, preheat it to 375 degrees, remove the duck from the bag and place in a shallow baking pan, then bake 15-20 minutes. To cook it on the grill, preheat it to medium heat, then place the duck skin-side down on the rack and heat for 10 minutes, then turn the duck over and heat for an additional 5-10 minutes or until thoroughly heated.

One note on the cooking instructions: the duck comes pre-cooked, so you don’t need to worry about achieving an internal temperature, although you certainly can if you want to.

The package also comes with an orange sauce packet that can either be heated by boiling in water 6-8 minutes or by placing the sauce in a microwave-safe bowl and heating it in the microwave for 1 minute and 15 seconds, stirring halfway through. We did the microwave, but we found it was plenty hot after 45 seconds, so be sure to check it ahead of time.

We thought the duck was decent. The meat itself was good: it was tender and flavorful. We were not big fans of the orange sauce, although this was probably more a matter of taste than a reflection on the sauce quality. If I had it to do over again, I might have bypassed the instructions to pour the sauce over the duck and instead served it on the side, maybe experimenting with other seasonings.

Nutritionally … well, we wouldn’t call it a health food. 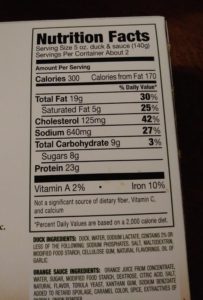 One other word of warning: this is not a lot of duck. The package says it contains about two 5-ounce servings of duck, and in our experience that’s about right. In our view, it’s good for maybe two people, and even then probably with side items. We wouldn’t recommend making this the main entree for four people unless you get two boxes.

This box isn’t a bad option if you’re looking to try (or re-try) duck meat. The meat is pretty good and it cooks up rather easily. Just be aware that it doesn’t make for a lot, and, depending on your tastes, you might want to hold off the orange sauce to the side until you decide if you like it. Otherwise, it’s worth a look.