Trader Joe’s is big on ethnic foods. Mexican dishes, Chinese foods, and Indian cuisine are all common sights, despite the fact that Trader Joe’s is a small-inventory store like its distant cousin, Aldi. A lot of these ethnic foods are in the frozen section of the store, but there are a few jarred products, too. 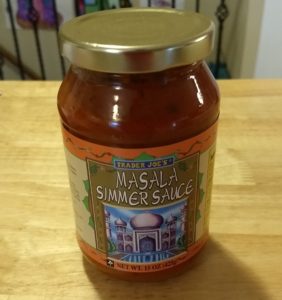 One such jarred option is Trader Joe’s Masala Simmer Sauce. The sauce comes in a 15-ounce jar.

The cooking instructions call for combining the contents of the jar with 8 ounces of water in a skillet. Then you are to cut about 1 pound of boneless, skinless chicken — or 1 1/2 pounds of on-the-bone chicken — into 1-inch cubes. Next, you add the cubes of raw chicken into the skillet with the water and sauce, covering and simmering for 10-15 minutes or until the chicken is thoroughly cooked. The instructions note that you can garnish it with cilantro and serve it with rice, pasta, or pita bread. We served it with Aldi’s excellent naan. 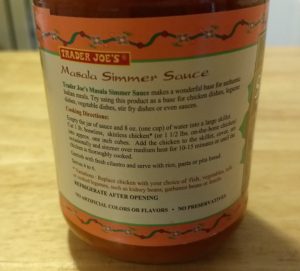 While it certainly smells the part — the kitchen lit up with the scent of curry — we thought this masala sauce tasted rather plain. It’s not the worst masala we’ve had, but it didn’t have a lot in the realm of flavor. It’s also very mild, although our family is perfectly fine with mild foods. In the hands of a skilled expert, it could probably be improved by adding some other ingredients, but in its form as it comes out of the jar, it’s inferior to other jarred simmer sauces we’ve tried.

On a related note, it was also a bit watery. This, we know, has to do with the fact that the instructions call for adding 8 ounces of water. This is a little different than similarly sized Indian jars we’ve cooked from other stores, which don’t call for water. We’re not sure if it would taste better if it was cooked straight up without water, or perhaps with less water. Maybe. That’s a test for another day. 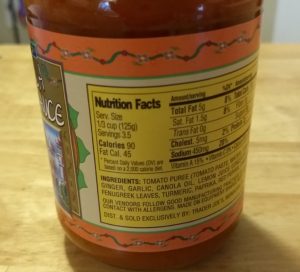 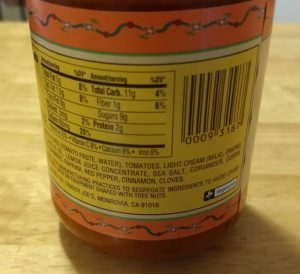 Trader Joe’s Masala Simmer Sauce is a passable, if forgettable Indian jarred dish. The flavor is okay, if on the plain side, and it’s watery compared to other simmer sauces we’ve had. We tolerated it, but we likely won’t buy it again.