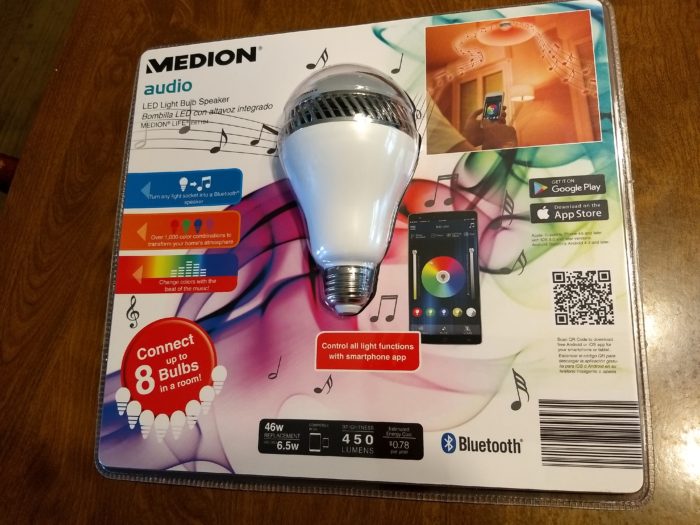 Sometimes you have to wonder just who thought up certain products. I mean, does a person just say, “You know, I should totally invent a quality banana slicer,” or does someone wake up one day and proclaim, “You know, what the world really needs is a dog selfie stick“? I have no idea.

I also have no idea who, on the way to work one day, decided, “It’s time to invent a light bulb that also changes colors and changes music.” But obviously someone did, because this product exists. And Aldi sells one.

The Medion LED Light Bulb Speaker, an Aldi Special Buy (ALDI Find), retails for $19.99. This appears to be about on par with the (shockingly) many LED light bulb speakers available online. Features include:

The package comes with three things: the light bulb itself, the manual, and a warranty card. The packaging also has a QR code you can scan for the app (or you can click on the appropriate links above).

I tested a single light bulb using an Android smartphone. That means that this review doesn’t cover 1) the Apple app or 2) pairing together multiple lights, which the packaging and manual says it can do.

The light bulb bills itself as a 46 watt equivalent, 450 lumen light bulb. Whether that’s enough for you depends on your preferences. I tend to use 40 watt equivalent bulbs in desk lamps and in ceiling fixtures that use 3-4 bulbs collectively. On the other hand, for floor lamps that need to fill a room, I use 60 watt bulbs, and in my basement family room, I use 75-100 watt equivalent bulbs. Those are just my own personal preferences, but, for me, it means that this bulb is, by itself, not enough for a floor lamp, and I wasn’t interested in forking out $60-80 for a set. I tested it primarily in my dining room, but I decided its best location was on a bedroom desk lamp.

Physically, the bulb is a little bigger and a little heavier than a typical LED bulb, to accommodate the hardware that includes the speaker. 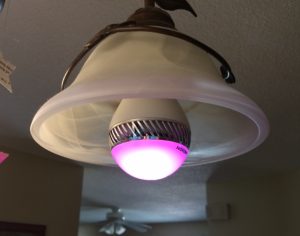 When you first turn the light bulb on, the default is a full bright white light. You can change that via the app (more on the app below), and you can even leave the color changed without your phone in proximity.

The colors are, honestly, pretty cool. If you want a bare white, you can have that. If you prefer the warm glow of an incandescent light, it can do that, too. And if you want rainbow, you can have rainbow. You can even turn the light off from your phone if you want.

One part I wasn’t able to figure out was how the light sets when it’s turned off. In some cases I turned off the light and it went back to being the default white. In other cases it stayed whatever it was that I’d last used. In still other cases it stayed something other than default white even when I subsequently changed it to something else. I’m not sure if this is a bug or a feature I’m not using properly (there is a “save” button but that didn’t seem to be a factor).

The average person probably knows, going into it, that this isn’t going to be a top-self speaker … not one that’s mounted around a light bulb, at least. If you’re looking to rock out a party, this probably isn’t going to do it. What’s more, the app instructions make it clear that it can only use one speaker at a time, so anyone hoping for a collective sound from multiple speakers is out of luck. (It also seems a bit of a waste to have, say, three bulbs but only be able to use the sound from one of them, but that may just be the restrictions of Bluetooth.)

That all said, the sound was by no means the worst that I’ve heard. (I’m looking at you, Bauhn Accessories Radio Alarm Clock.) In fact, it’s quite decent. We played some classical, some modern, some epic, and even a little radio over the speaker, and it makes for decent sound given the constraints. The bass is nothing to write home about, but the mids and uppers seem fine. The app even gives you a bit of flexibility with equalizer settings (through the sound effects menu) although the impact isn’t huge.

The app is an important part of this bulb, particularly the light component. You don’t need it to access music — you can use your device’s Bluetooth menu to do that easily enough — but to make any changes to the light bulb itself, you need the app.

Setup for Android and Apple isn’t terribly hard, but I do recommend screwing in the light bulb and turning on the power to whatever the light bulb is plugged into before starting up the app. I made the mistake of turning on the app before I had the bulb turned on and I had some issues connecting the sound. Once I turned on the light and then scanned for the device I was able to solve that problem.

The app, at least at the time of this post, isn’t going to win any beauty awards, but it’s mostly functional. It has a device list menu for searching devices, a bulb color menu (below), a music menu, a song menu, a shake menu, and a user guide. (The in-app user guide is actually a little better than the print one, so it’s worth referring to if you need help.)

The searching device menu searches for nearby bulbs. Once it detects bulbs, connecting or disconnecting is a simple click.

The bulb color menu (also called “control” on the app) allows you to do things like control the color of the bulb, set up an alarm, or use a sleep assist function to turn off the light after a certain time. You can also save your settings to the phone. A lighting effects submenu also allows for certain preset effects, including a rainbow effect if you want a bit of variety. 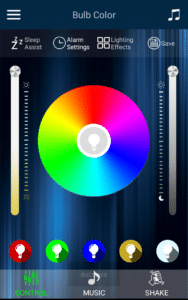 The light bulb menu on the Android app. (Click to enlarge.)

The music menu has three components.

The app, overall, isn’t the most intuitive — it took a while to figure out where everything was — but, other than some of the earlier issues with setting a default light color (which I’m not sure it can), it seems to work. Both the Google Play and Apple App Store versions currently have ratings in the 3-4 star range, but it also seems that the app has seen some improvements, including an update right around the time of this post.

One other note: the app only asks for two permissions — storage and location — but it’s not clear to me why it needs location. Still, I’ve had apps that ask for a whole lot more, so in general this isn’t a huge nit.

If you’re looking to add a bit of excitement to your bedroom or dorm room, the Medion LED Light Bulb Speaker is an interesting little device. The colors are cool, the speaker is better than I expected, and the app lets you do a lot of things. It’s got some hiccups, primarily on the app end, and I wish it were a little brighter, but all things considered it’s not bad for the price. A 2-year warranty is a nice extra. Worth a look.