EDITOR’S NOTE: We’ve updated this post with a fix to one of the product’s most annoying features. Thanks to the helpful commenters who pointed us in the right direction.

‘Tis the season for Christmas decor, and Aldi has been all in with its Christmas selection. The nostalgia factor is high, thanks to a parade of products, many of them new for 2019. Aldi is selling much of its holiday fare under the Merry Moments brand label, which made its debut in 2018.

We’ve been keeping a close eye on Aldi’s selection, in hopes of adding to our home’s Christmas look this year. When I saw Aldi was selling a Christmas train set, I thought it had enough promise as something to put around the Christmas tree that I decided to check it out. 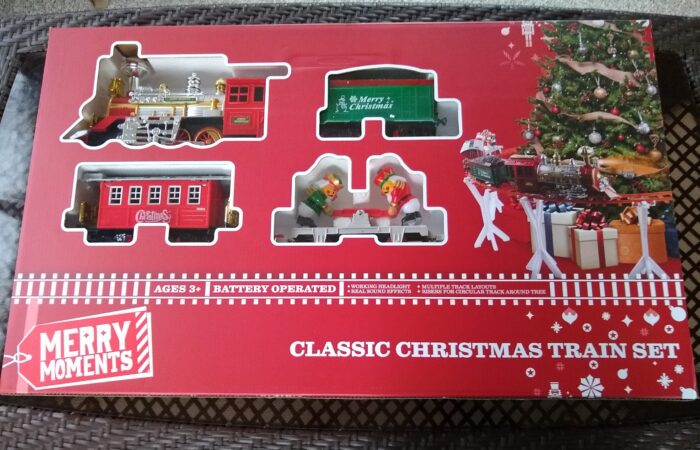 The Merry Moments Classic Christmas Train Set is, as you would expect, an ALDI Find, which means it’s only in stores for a little while. It retails for $24.99, which puts it mostly on par with other train sets of this type. According to a sticker on the bottom of the engine, the set is made by World Tech Toys out of Shantou, China.

Features of the 52-piece train set include:

Not included in the set are 6 AA batteries, which are required if you want the train to move.

Setup is a bit finicky. The tracks fit together with a tooth system that requires both a delicate hand and a bit of force to make them click, while getting the battery case open requires working a single Phillips head screw out of the coal car. Even fitting the cars together requires a gentle dance of plugging everything in, making sure all the cars are properly sitting on the track, and making sure the hooks between cars are properly set. It took us a few tries to make it where the back cars didn’t separate from the front ones when the train took off. 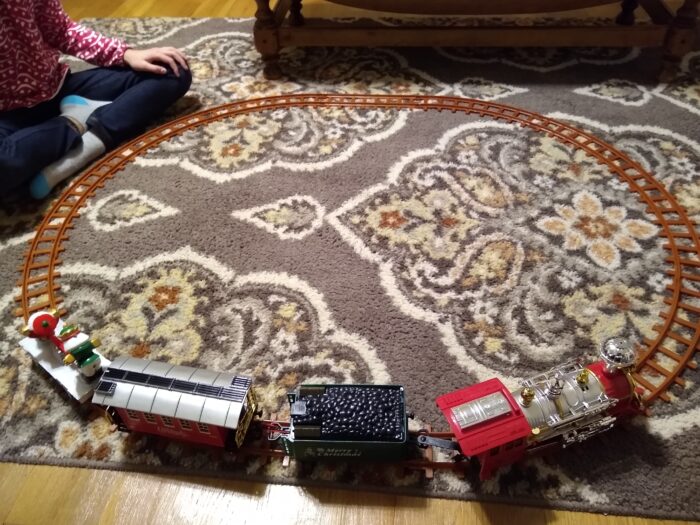 Eventually, though, we got everything set up properly. We eagerly flipped the switch, ready for the action.

And we heard this.

In case the video doesn’t make it crystal clear: the train blares out Jingle Bells as it runs around the track. And blares is not an understatement: it’s loud, and it sounds pretty lousy, right down to a weird key fluctuation at the end. My oldest daughter said it sounded like something out of a horror movie, and I can’t disagree. It’s terrible.

I searched for a way to turn off the music, but there is none. That’s right: the only way this train moves is to the music.

To be sure, you could muffle the music somewhat by putting something like tape over the holes at the top of the train where the music appears to come out, but that only reduces the problem. It doesn’t eliminate the fact that this train will belt out its own twisted version of Jingle Bells as long as it’s orbiting around your tree.

UPDATE (11/23/19): After we first posted this review, a couple of commenters pointed out that there is a way to hack a solution, and it’s not terribly difficult.

Step 1: remove the three screws on the bottom cover of the train. You’ll need a small Phillips head. 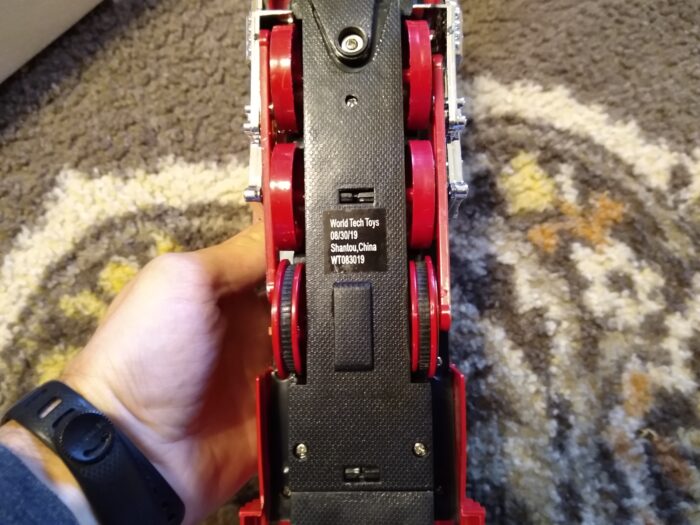 Step 2: carefully pull the cover up. Inside, you’ll see a tiny circuit board connected to several colored wires. 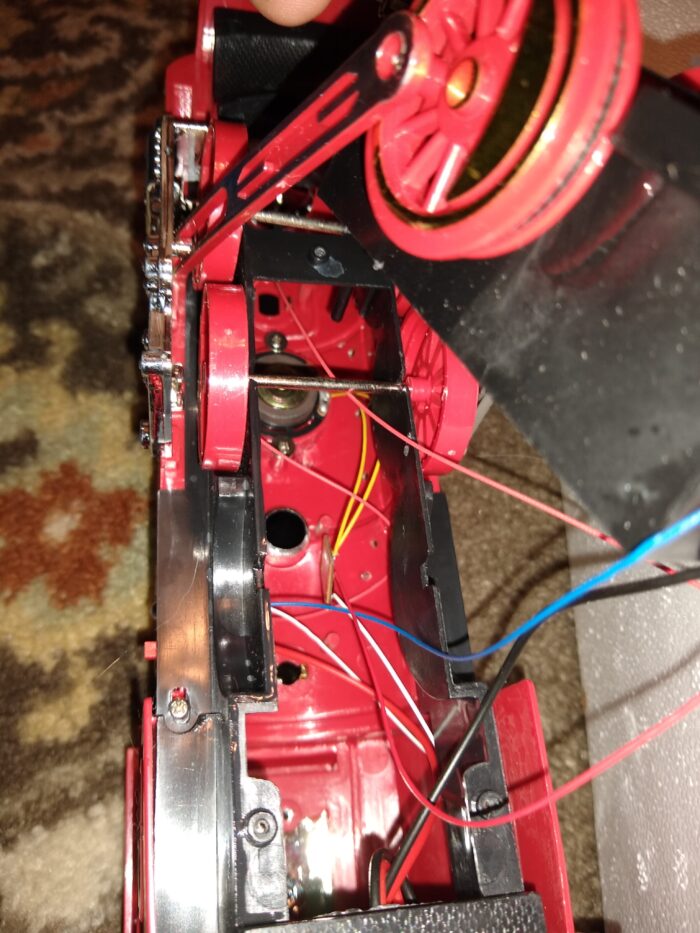 Notice the circuit board in the middle, and two wires stretching to the round speaker farther up. (Click to enlarge.)

Step 3: note the two wires which run from the circuit board to the speaker at the top. (In our train — as well as some commenters — those wires were yellow, although others report that they were not. Either way, look for wires that run from the circuit board to the speaker.) If you cut those two wires, the music will stop, permanently. It’s a small space, so you’ll have to be careful not to cut any of the other wires, some of which control the train’s movement. I initially tried using wire cutters, but found a small pair of scissors was easier to use.

A few other notes. One, the box boasts that it comes with a working headlight. That’s true … although, by headlight, we’re talking about an anemic little red light that barely glows in the dark.

Two, as the video above indicates, our train was able to make a number of passes without derailing, but we have to admit we held our breath a little around corners.

Finally, we did test out the track in a full circle on the raised stands, which is easiest with two or more people. The track clicks into place on the stands, and it feels pretty sturdy once set up. We found the best way to put it together elevated was to click the elevated pieces together first, then connect them. 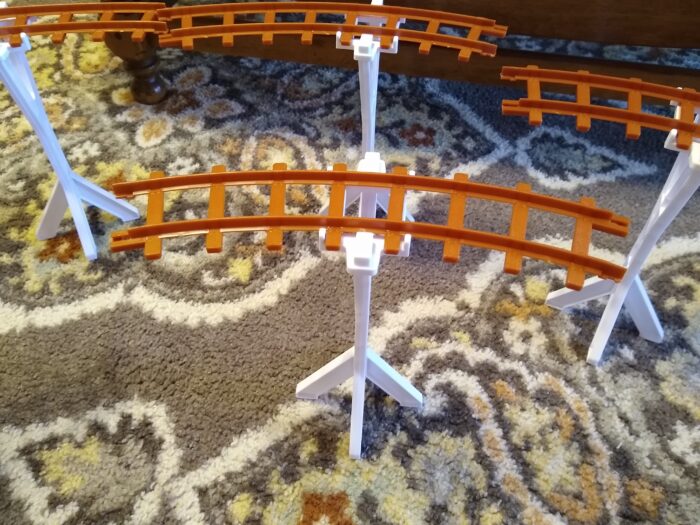 In this configuration, the diameter of the track is roughly 32 inches and the total clearance from floor to the top of the train is about 14 inches. How well this fits under a tree will depend on the tree. Keep in mind that the track can only be elevated in a circle with all curved pieces. 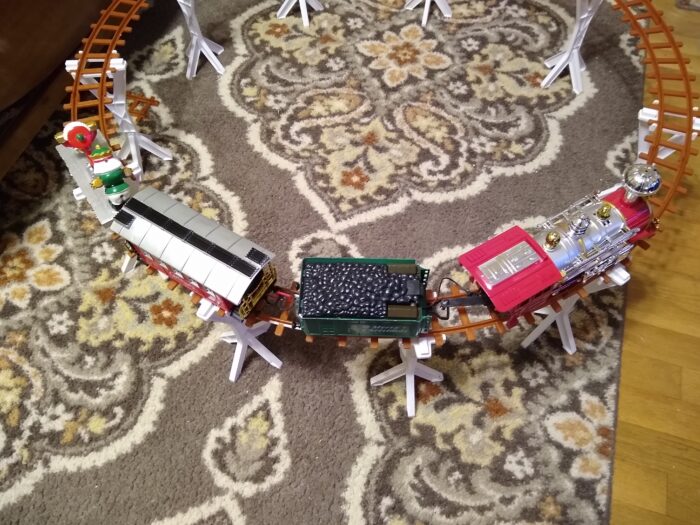 We came into this classic Christmas train set with high hopes, but we’re sad to report that the train comes out of the box with a serious flaw. While the train functions well enough mechanically, the music is loud and grating. If you’re willing to unscrew the bottom and cut a couple of cords, you can fix that problem. It would have been nice if the manufacturer had given users an option without having to hack a solution, though.