When I was a kid, every year when I visited my late paternal grandparents’ house to celebrate the holidays with extended family, my grandmother had a small green ceramic Christmas tree on display. It usually sat on a sideboard near the dining room table, and it lit up with (if I remember correctly) an electric plug. As a kid, I was more interested in the gifts under my grandparents’ full-sized Christmas tree in the living room, or in grandma’s homemade desserts, but now that both of my paternal grandparents have passed away, I look back on things like that little Christmas tree (which I believe got passed down to one of my aunts) with more nostalgia.

That specific style of ceramic Christmas tree first appeared as early as the 1940s, but they surged in popularity during the 1970s, and Better Homes & Gardens reports that after that era production stopped for several decades, which is why many people think of their grandmothers, mothers, or other older relatives in connection with these trees. In the last few years, trees like my grandmother’s have enjoyed a resurgence in popularity. They’re considered retro and stylish, with vintage originals selling for several hundred dollars on Etsy, but now new and affordable versions are being sold at many retailers, including Target, Home Depot, Walmart, and more. 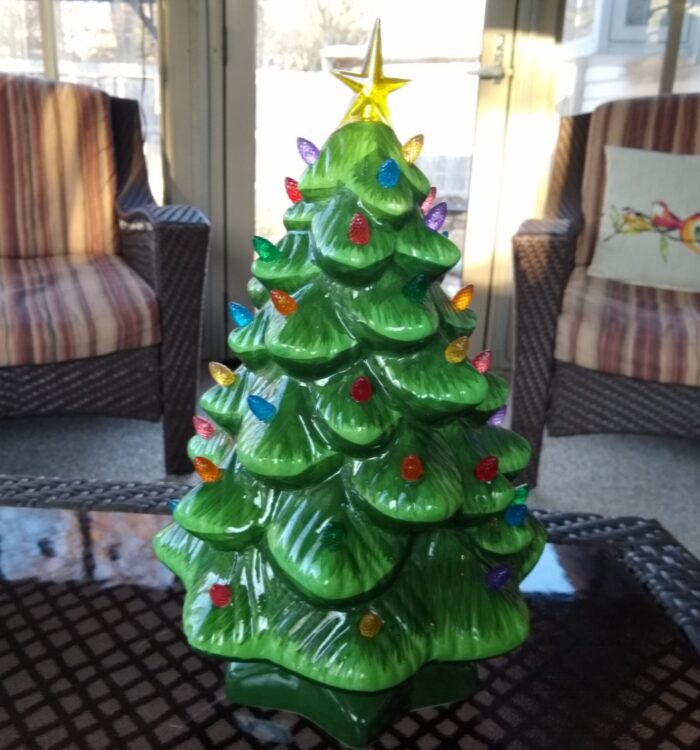 This year, Aldi joined the ceramic tree trend and offered the Merry Moments 14-Inch Nostalgic Christmas Tree for $24.99. It comes in green or white with multi-color lights and requires three C batteries, which are not included. It also has a four-hour timer. The tree was made in China, and a removable tag that comes with it says it’s made by Mr. Christmas, which is based out of Memphis, Tennessee, and makes a variety of holiday decorations, including ceramic trees that are sold at retailers such as Home Depot, Target, Walmart, Michaels, and more.

The tree seemed a bit pricey even for Aldi, but at the time of publication, a similar 14-inch tree sold for nearly $40 at Home Depot, and I found one for $30 at Target. I did find that Walmart sells a tree that is two inches taller for $25, the same price as Aldi’s 14-inch tree. Amazon also sells similarly sized trees starting around $25 and going up from there, and it sells smaller 10-inch and 9.5-inch trees for around $15 to $20. In other words, it’s not easy to find a 14-inch tree for less than Aldi’s price of $24.99.

So I set out to Aldi to get myself a retro tree the week they arrived in stores. I was disappointed and surprised to discover that the Aldi trees did not come packaged in individual boxes with protective Styrofoam. They were instead packed in groups of four inside single large blocks of Styrofoam, and customers simply plucked a tree out of the Styrofoam to purchase one. I got to my local Aldi so early that the trees were all still completely taped inside the Styrofoam blocks so I couldn’t see them, and an employee opened them up for me. Of the first block that got opened, two or three of the four trees were cracked or smashed. 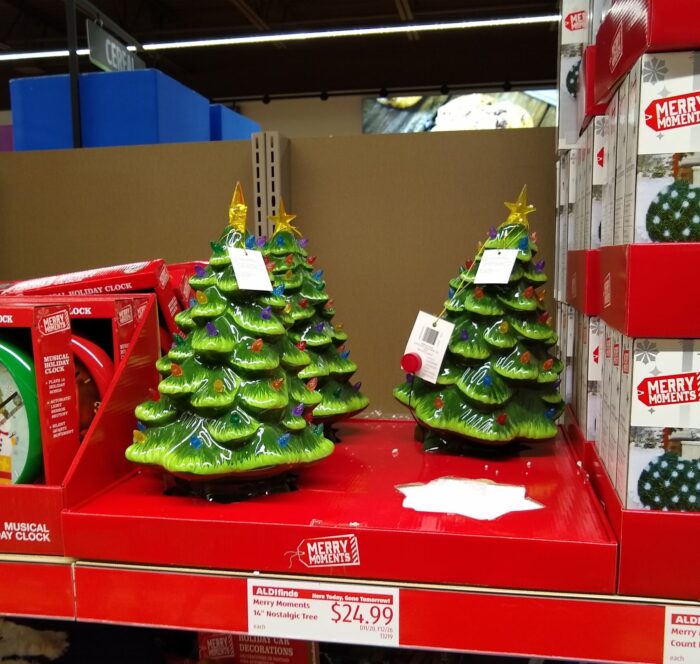 The trees on display in the store, after being removed from the Styrofoam packing cubes.

I carefully selected an intact tree and inspected it closely, and then I delicately positioned it in my cart so it wouldn’t fall over or break while I did the rest of my shopping. I set the tree in my car’s front passenger seat on the way home and set a soft jacket over it to protect it.

I got my tree home safely, and it was pretty smooth sailing from there. I put some batteries in and turned it on, and the colored lights around the tree and the star on top glowed. The switch has “on,” “off,” and “timer” positions. To activate the timer, you slide the switch to the “timer” position, and the lights will turn on for four hours and then remain off for 20 hours.

The timer has worked well so far; the lights glow for four hours, turn off for 20 hours, and then turn back on again for four hours, and so on. Because the tree is a delicate thing to handle and I have to be careful not to break off a colored light or drop it, the timer is a helpful feature that keeps me from having to pick up the tree every day and flip it upside down to turn it on and off.

Overall, the tree looks pretty, and I’m happy with how it works so far. In the meantime, I’ll be looking for an appropriately sized storage box and some protective packing material so I can safely stow my tree after the holidays are over.

Aldi’s Merry Moments 14-Inch Nostalgic Christmas Tree looks a lot like the tree my late grandmother set out every holiday season, except it’s battery-operated rather than having an electric plug. It’s pretty and works well so far, but it really should have come with a protective box for storage, and it was a bit dicey getting it home from the store because it did not come in a box.