Some of the pizzas are designed to be purely exotic. But others are meant to be your garden variety pizza. 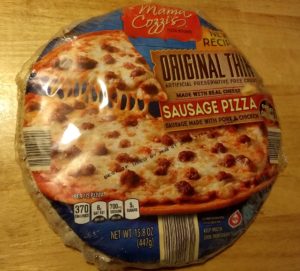 Mama Cozzi’s Original Thin Crust Pizza is an Aldi Regular Buy, meaning it’s available year-round. It’s meant to be an Aldi imitation of a Tombstone or Jack’s pizza. We purchased it for just $2.19, which is cheaper than just about any other pizza we’ve seen this side of a Totino’s. The packaging boasts it as being “preservative free,” and it also boasts a “new recipe,” perhaps in response to the fact that people thought the old recipe wasn’t all that great. (While we didn’t review the old recipe, we tried it and can testify that it wasn’t great.)

Cooking it is a strictly oven experience, unless you are one of those people who like to experiment with grilling. After preheating the oven to 400 degrees, you cook it for 13-16 minutes or until the crust is golden brown and the cheese in the center is melted. The instructions add that you should let it stand for 5 minutes before serving, and to make sure the internal temperature of the pizza is 165 degrees. 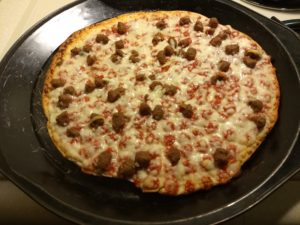 We tried out the sausage version of the pizza, and I found it to be decent. The cheese and sausage were competent, and the crust was okay, if not quite as flaky as some of its name brand competitors. Still, the new recipe is an improvement.

Nutritionally … well, it’s got calories, fat, sodium, and carbs in ample quantities. Pizza in general isn’t healthy, and this one is no exception. 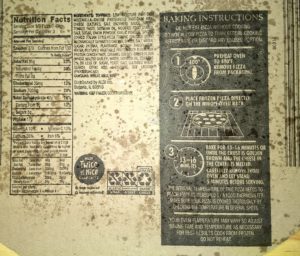 Mama Cozzi’s Original Thin Crust Pizza is a decent — if not spectacular — pie, with solid taste atop an average crust. It’s not going to change the world, but it makes for a cheap eat … and for just over two dollars, we mean cheap.