A grilled cheese and tuna salad sandwich is one of my favorite comfort foods. Tuna salad sandwiches are staples of my kids’ lunch boxes, and tuna salad spread atop Triscuit-style crackers makes a great lunch or snack. Canned tuna is an inexpensive protein source no matter what grocery store you buy it from, which is why moms have been making tuna noodle casserole for generations. Aldi sells both name-brand canned Bumblebee tuna and its own selection of canned tuna under its Northern Catch house brand. 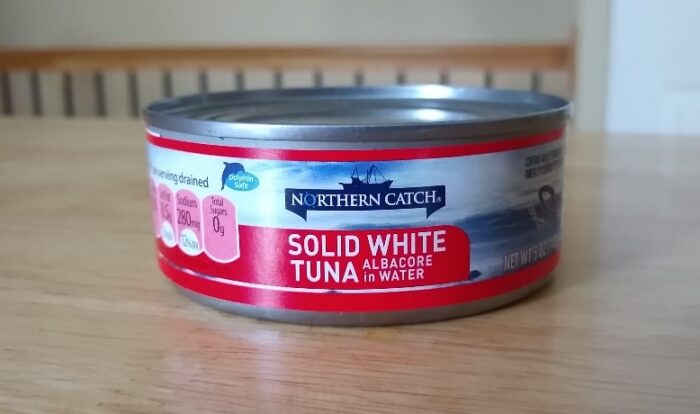 The albacore tuna option under the Northern Catch brand at Aldi.

Before we look at the individual products, let’s look at how they’re caught, which might be important to some consumers.

All of Aldi’s canned tuna varieties are labelled as “dolphin safe.” Dolphins (and other species such as sea turtles, certain types of sharks, and diving sea birds) can accidentally get caught and die in the large nets or long lines sometimes used to snare tuna, mostly because these fishing methods don’t discriminate among species and attract both target and non-target fish. When species other than the target fish are unintentionally caught, it’s called bycatch.

Wikipedia states that dolphin-safe tuna labels “are used to denote compliance with laws or policies designed to minimize dolphin fatalities during fishing for tuna destined for canning.” Still, several class-action lawsuits were filed against several name-brand tuna producers last year in which complaints were made about their dolphin-safe claims. Your best bet for sustainable, ethical tuna might be to look at the catch method printed on the can (more on that in a bit).

In 2017, Greenpeace published a ranking of major tuna producers, scoring them on how sustainable, ethical, and fair their practices are. Because this was published three years ago, and Aldi’s tuna selection seems to have changed since then, it’s a bit outdated. Still, when the ranking was published, Aldi scored in the middle of the pack, ranking at number 9 out of 20 tuna producers. Aldi scored lower than brands such as Wild Planet (which was number 1), Whole Foods, Hy-Vee, and Wegmans. Meanwhile, Aldi scored higher than Kroger, Target, Costco, Chicken of the Sea, Trader Joe’s, Bumble Bee, Walmart, H-E-B, and Starkist. In the survey, Aldi got high marks for selling pole and line-caught skipjack tuna, but the grocer took a knock for its albacore tuna.

The Marine Conservation Society states: “Skipjack tuna is a smaller and faster growing tuna, and one the best choices out of the commercially targeted tuna species. Skipjack stocks worldwide are still in fairly good shape, but the increasing catch in some areas is concerning and management needs to be improved in most areas.”

Another concern about tuna is mercury poisoning. Mercury is a toxic heavy metal that ends up in the ocean through industrial pollution but also through natural processes such as volcanic eruptions, and it can act as a neurotoxin in the human body, causing problems with the brain and nervous system. Tuna have higher levels of mercury because they eat smaller fish that already have some level of mercury contamination. Skipjack tuna and other chunk light tuna don’t have as much mercury as other tuna species such as albacore, yellowfin, or bigeye. The FDA says you can eat 2-3 servings or 8-12 ounces per week of canned light tuna, including skipjack. Aldi’s skipjack tuna comes in 5-ounce cans, so that translates to roughly two cans of tuna per week, give or take a few ounces. Albacore and other white tuna contain three times as much mercury, and it’s recommended to limit consumption to 4 ounces per week for adults, which comes out to a little less than one can of Aldi’s albacore tuna.

After all of that, if you’re concerned about sustainability and/or mercury and aren’t sure you want to buy tuna, Aldi also sells canned salmon, as mentioned above, and it’s an option that appears to be more environmentally friendly and healthier.

Read on for a closer look at each of the Northern Catch tuna varieties sold at Aldi. 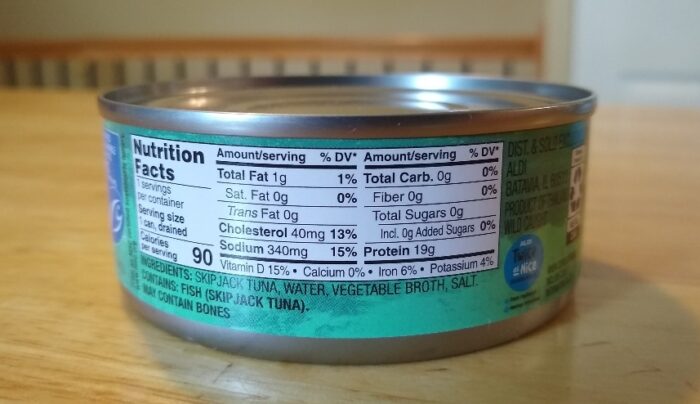 This cost 95 cents for a 5-oz. can at the time of publication, making it the most expensive of the three tuna offerings. It is a wild-caught, tuna packed in water and claims to be dolphin safe. It’s caught with a pole and line and is certified sustainable. It was caught in the Western Indian Ocean (FAO Area 51) and is a product of Thailand.

Ingredients are: skipjack tuna, water, vegetable broth, and salt. It may contain bones.

This is easily your best canned tuna option under Aldi’s Northern Catch line. After a friend tipped me off and mentioned Aldi now sells a more sustainable tuna option, it’s now the only tuna I buy at Aldi.

According to the international nonprofit environmental advocacy group Oceana, pole and line-caught tuna is the most eco-friendly way to catch tuna because it has fewer issues with bycatch. Pole and line fishing is exactly what it sounds like, with fishermen on a boat using fishing poles, lines, and bait or lures to catch fish one at a time. When sharks, turtles, or diving birds occasionally get accidentally caught using a pole and line, they can be set free. It’s a more labor-intensive way to fish, requiring more fishermen than other catch methods, which is why pole and line tuna usually costs slightly more than other types of tuna, but it also creates jobs for more local fishermen.

In terms of taste, it came out like I expected it to taste, with that familiar tuna flavor. 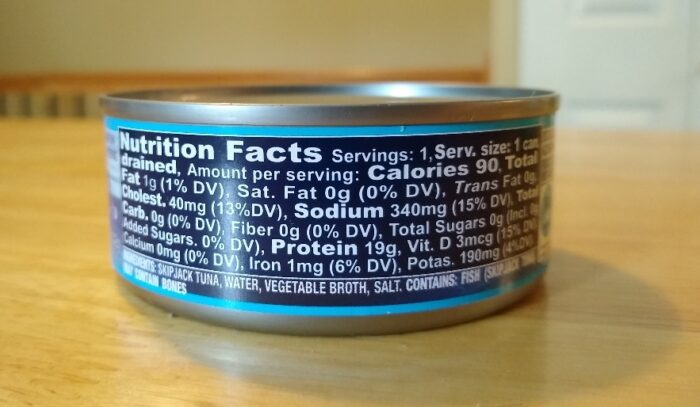 This cost 69 cents for a 5-oz. can at the time of publication. It is wild-caught and claims to be dolphin-safe. It’s caught using the purse seine (free school) method in the Pacific Ocean (FAO Area 71), and it’s a product of Thailand.

Ingredients are: skipjack tuna, water, vegetable broth, and salt. It may contain bones.

Purse seine fishing uses a specific type of net that is drawn together to enclose fish, similar to pulling the drawstrings of a purse shut. Because purse seine is a non-selective method, bycatch can include sea mammals, other fish, and turtles whose flippers get tangled in the net mesh, and sometimes they can be crushed by the weight of the catch. If these other species are spotted and removed from the nets quickly, they can sometimes be saved and returned to the ocean. Oceana states dead bycatch from purse seine fishing is about 1 to 5 percent of a catch, depending on how tuna are attracted to the area, while pole and line fishing has a bycatch rate of 1 percent or less.

Taste-wise, I thought it tasted just like the sustainably caught tuna. 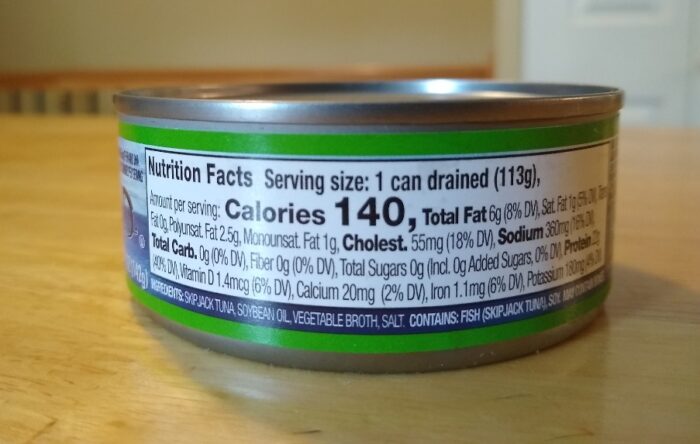 This cost 69 cents for a 5-oz. can at the time of publication. This is wild-caught and claims to be dolphin-safe. It’s caught using the purse seine (free school) method in the Pacific (FAO 71 and FAO 77), and it’s a product of China. Again, this is an inferior fishing method compared to pole and line fishing because it has a higher bycatch rate.

This is the highest in calories and fat among all of the Northern Catch Aldi brands, and that’s because it’s packed in soybean oil instead of water. (Although the albacore tuna below comes in not far behind in terms of calories per serving.)

Taste-wise, this tuna was maybe a little less chunky than the water tuna and of course has an oil broth, but since I drain it out and then add other ingredients I’m not sure the oil tastes all that different for us in the end. It might be different for you depending on what you do with the tuna. 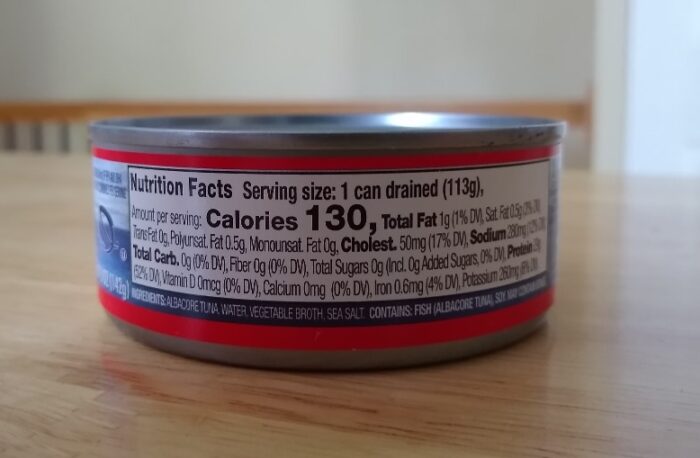 This cost $1.16 for a 5-oz. can at the time of publication, and it consists of albacore packed in water. Albacore is a larger fish, so that may account for its higher price compared to Aldi’s skipjack tuna. This albacore tuna is caught using a longline method in the Atlantic (FAO 31, FAO 34, FAO 41, and FAO 47), Indian Ocean (FAO 51 and FAO 57), and Pacific (FAO 61, FAO 77, and FAO 81). The can states this tuna was wild caught and canned in the U.S. It’s a product of Vietnam.

Longline fishing involves one main long fishing line, as the name indicates, with several branching lines. It can have a higher rate of bycatch, although some mitigation measures can be taken, but we don’t have specific details about the longline methods for Aldi’s albacore.

In terms of taste, this is your typical canned tuna.

Aldi sells four different varieties of canned tuna under its Northern Catch house brand, and for us they mostly taste about the same, especially if you’re draining them and then using them in a recipe with other ingredients, such as tuna salad. We generally avoid the Northern Catch Solid White Tuna, which consists of albacore, known for having some of the highest mercury levels among tuna. Of the four Northern Catch tuna varieties, we like the Northern Catch Sustainably Caught Skipjack Chunk Light Tuna in Water best, because it’s caught using the sustainable pole and line method.