EDITOR’S NOTE: Aldi sold this classic stand mixer again in November of 2021 and November of 2022 for $79.99. Read our updated open thread about the Ambiano Classic Stand Mixer here.

When fall arrives, Aldi gets serious about stocking baking supplies you may need for upcoming holidays like Thanksgiving. Over the years, we’ve seen Aldi sell several types of stand mixers, ranging from cheap to mid-priced to expensive. The most recent mixer in stores is the mid-priced Ambiano Classic Stand Mixer. 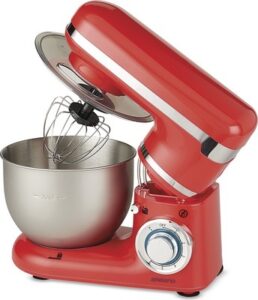 Aldi’s Ambiano Classic Stand Mixer sold for $59.99 in 2019. This is Aldi’s mid-range stand mixer, and it’s been around for a few years. Aldi sold a similar Ambiano Classic Stand Mixer for $59.99 in October of 2018 and October of 2017. The internet went a little gaga over Aldi’s mid-priced mixer in 2017, in part because it’s a lot cheaper than most other stand mixers of its type. Click here to read one blogger’s experience putting the mixer to the test with recipes like mashed potatoes, roll dough, and cake batter.

On the cheaper end of things, Aldi also sold a more basic Ambiano 4.6-Quart Stand Mixer for $29.99 in 2018 and for $24.99 in 2017. We own a slightly smaller 2016 model Ambiano 4-Quart Stand Mixer from Aldi. I try not to go overboard with carbs and don’t do a lot of hard-core baking, so it works for my family’s modest needs, which includes making banana bread and pumpkin bread. I mostly use it as a handheld mixer without the stand. Read our review of that mixer here.

In the upper price range, Aldi also sold an Ambiano Professional 4.8-Quart Stand Mixer for $129.99 in November of 2018. We don’t have any experience with that model.

Going back to the 2019 Ambiano Classic Stand Mixer (product code 98969), its features include:

We haven’t tried the Ambiano Classic Stand Mixer, so we can’t speak to how well it works. We don’t know who makes the stand mixer or what kind of warranty the 2019 mixer comes with, but the 2018 model had a three-year warranty.

Do you have experience with the Ambiano Classic Stand Mixer? Share your thoughts in the comments.