In the parade of pumpkin-inspired goods that Trader Joe’s rolls out each fall, I found something great for my family’s weekend breakfasts when we often enjoy cinnamon rolls. Aldi’s cousin, Trader Joe’s, sells pumpkin rolls. 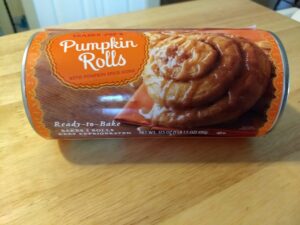 Trader Joe’s Pumpkin Rolls are traditional rolls baked with dried pumpkin, cinnamon, nutmeg, and cloves, among other things. The rube of rolls includes a packet of pumpkin spice icing flavored with pumpkin puree, cinnamon, and ginger, among other ingredients.

They cost $3.99 at the time of publication for a 17.5-oz. tube containing five rolls, and they’re found in the store’s refrigerated section. 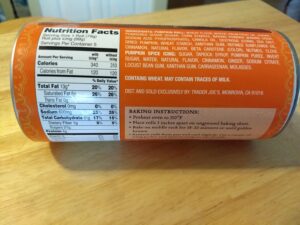 A section of small print mentions that the icing adds 30 additional calories, 5 mg of sodium, 7 grams of total carbs, and 7 grams of sugars.

The first ingredient in the rolls is wheat flour, and the rolls contain dried pumpkin, while the icing (the first ingredient is sugar, not surprisingly) has pumpkin puree. There are a few processed ingredients such as dextrose (made with corn), xanthan gum, locust bean gum, carrageenan, and natural flavor in these rolls and icing.

For those looking out for allergens, these contain wheat and may contain traces of milk.

To prepare the rolls, preheat the oven to 350 degrees. Place the rolls two inches apart on an ungreased baking sheet. Bake on the middle rack for 18 to 20 minutes or until golden brown. Remove the rolls from the pan and cool slightly. Cut a corner of the icing packet and squeeze icing on top of rolls.

Taste wise, these pumpkin rolls were everything we hoped they’d be. They have good pumpkin flavor without being overwhelming or too fake. They bake up slightly crisp on the outer edges while the inner swirls are soft and chewy. The pumpkin icing is decent, too. These rolls also are large and filling, and very satisfying.

Trader Joe’s Pumpkin Rolls are well worth trying. They bake up sweet, soft, and chewy with a good pumpkin flavor that is not overpowering or artificial-tasting. They are a processed food heavy on calories and sugar, so indulge sparingly.