When fall arrives, Aldi gets serious about stocking baking supplies you may need for upcoming holidays such as Thanksgiving, Christmas, and the New Year. Over the years, we’ve seen Aldi sell several types of stand mixers, ranging from cheap to mid-priced to expensive. Aldi sells most mixers under its Ambiano brand, which is not a separate company but rather is the Aldi private label for various kitchen products, including electric grills and griddles, waffle makers, rice cookers, toasters, and coffee makers.

The most recent mixer in Aldi stores is the mid-priced Ambiano Classic Stand Mixer. We’ve seen Aldi sell a model similar to this one several times going back at least to 2017. 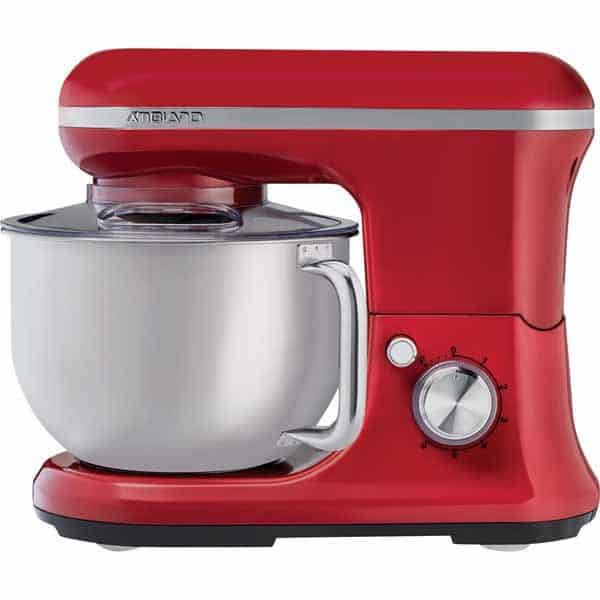 The Ambiano Classic Stand Mixer (Product Code: 817974) cost $69.99 in the fall of 2022. It sold for $59.99 in 2019 and $79.99 in 2021, so we’ve seen this model go up and down in price over the years. Aldi also sold a similar Ambiano Classic Stand Mixer for $59.99 in October of 2018 and October of 2017. The internet went a little gaga over Aldi’s mid-priced mixer a few years ago, in part because it’s a lot cheaper than most other stand mixers of its type. Click here to read one blogger’s experience putting the 2017 mixer model to the test with recipes such as mashed potatoes, roll dough, and cake batter.

This is Aldi’s mid-range stand mixer, and some people online, including Taste of Home, compare it to the KitchenAid brand.

On the cheaper end of things, Aldi also sold a more basic Ambiano 4.6-Quart Stand Mixer for $29.99 in 2018. We own a slightly smaller 2016 model Ambiano 4-Quart Stand Mixer from Aldi. It works for my family’s modest needs, which includes making homemade mashed potatoes as well as banana bread and pumpkin bread. I mostly use it as a handheld mixer without the stand, and you can read our review of that mixer here.

In the upper price range, Aldi also sold an Ambiano Professional 4.8-Quart Stand Mixer for $129.99 in November of 2018. We don’t have experience with that model.

Here’s more information about the 2022 Ambiano Classic Stand Mixer, according to Aldi:

In a previous open thread about the older model Ambiano Classic Stand Mixer, some readers commented they had trouble releasing the bowl from the stand. Another reader said the whisk attachment broke and the dust guard cracked after some use. We don’t know if those are still issues with the 2022 model. In a lengthy reddit thread last year, commenters generally agree the Aldi mixer is okay but isn’t the same as a KitchenAid.

The 2021 stand mixer came with a three-year warranty serviced by Medion, but Aldi has not yet published information about what kind of warranty the 2022 model has.

We haven’t tried the Ambiano Classic Stand Mixer, so we can’t speak to how well it works or how long it lasts. We also don’t know who makes the stand mixer.

Do you have experience with the Ambiano Classic Stand Mixer? Share your thoughts in the comments.