Aldi is rarely the first company to sell a new product, but it certainly knows how to spot a trend when it sees one. The grocer has rolled out its own imitations of Instant Pots, Keurigs, and YETIs, just to name a few, and while the Aldi imitation isn’t always as peerless as the original, it’s usually good enough when you take into account the lower price tag.

Enter the cold brew coffee trend. Aldi has ventured into the cold brew lineup with at least two different options: the Ambiano Cold Brew Coffee System, which we last saw for about $9.99, and this more expensive, electronic model. 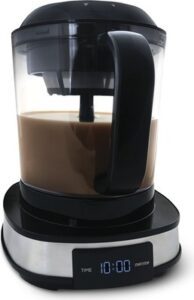 As far as we can tell, 2019 was the debut year for this Ambiano cold brew machine, as we can’t recall or find any previous examples.

According to Aldi, the coffee maker has four brew strengths. It claims to be able to brew in 10 minutes, and it can be used to brew cold brew, regular iced coffee, iced lattes, and iced macchiatos. It has variable timer settings depending on how long you want or need to brew your coffee.

Because the coffee maker is, at the time of this post, a debut item, there’s a lot we don’t know. We don’t yet know who the manufacturer is, and we don’t know how this product performs with regard to the various coffees it can make. Finally, we don’t know how it does over the long term.

Have any experience with the Ambiano Cold Brew Coffee Maker? Feel free to share your experience in the comments.