When I first got out of college, I found myself in an apartment where traditional grilling was not an option. The complex had a strict no-fire rule on the outdoor patios and balconies, and there just wasn’t anywhere else I could reasonably grill. When I moved out of that apartment and into a house, one of the first things I purchased was a propane gas grill (and I’ve since added a charcoal kettle grill), but I’ve never forgotten about my apartment days.

Not everyone can use a regular grill. Maybe they don’t have the money. Maybe, like my situation, they’re not allowed to. Maybe they have a regular grill, but weather conditions can get so brutal, like in winter, that they need another option during certain times. Or, maybe they’re going to a place where they need something small, portable, and electric.

There are ways to get by without a grill — pan-frying, broiling, even sometimes baking — but none of them quite match what a grill can do. That’s where indoor grills come in. In my apartment days, my best option was a George Foreman grill, which I thought did pretty good, all things considered. Helpfully, the electric grill market has grown since then.

A “smokeless” grill is an electric grill that claims to grill meat without the smoke you get with propane or charcoal. In reality, even these grills might produce a little smoke, especially with really fatty foods, but smokeless models keep it to a minimum. Some of these grill on two sides, like the Foreman, while others are a more traditional one-sided approach, which can be nice for grilling more than just burgers.

Aldi has sold electric griddles and smokeless grills in the past. This model is one of the larger ones. 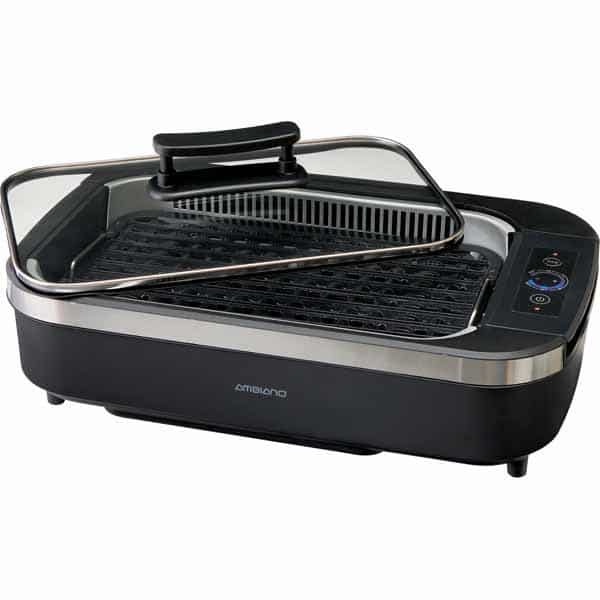 The Ambiano XL Smokeless Grill (Product Code: 707443) is an Aldi Find. That means it’s only in stores for a limited time. Once it’s gone, it’s gone, and you won’t be able to find it again until it comes back, whenever that might be. Because Aldi doesn’t do online shipping, if you can’t find it in your local store, you won’t be able to get it.

At the time of this post, the grill retailed for $79.99. That’s a lot less than other XL smokeless grills I can find online, which seems to make this a good deal.

Here’s more information about the grill, according to Aldi:

We haven’t tried out this grill, so we don’t know how well it heats up and cooks, how easy it is to clean, or how long it lasts. We’ve created this open thread for users to share their experiences.

Do you have experience with this grill? Let us know in the comments.