Smartwatches are pretty common now, especially as fitness trackers. There are a number of big names on the market, from Fitbit to Apple Watch, but the biggest names also usually have the biggest price tags. This has created a large market for generic watches, with varying degrees of quality.

Aldi has sold a few fitness trackers and smartwatches over the years, including some under the Aldi private label Crane brand and a few under the (non-Aldi) iTECH brand. Now Aldi has another watch under the similar-sounding iTOUCH brand. 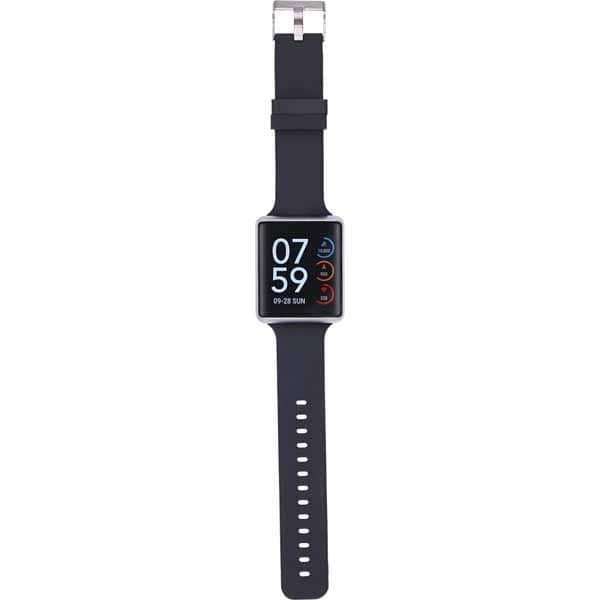 The iTOUCH AirSmart Watch with Heart Rate (Product Code: 13091) is an Aldi Find, meaning it’s only in stores for a limited time. At the time of this post, the watch cost $49.99.

iTOUCH is not an Aldi brand. It also isn’t connected in any way to Apple, although the name makes it sound like that. Instead, it’s the the brand name for iTOUCH Wearables, a company that sells fitness trackers and smartwatches.

iTOUCH products are widely available at other retailers, and I saw a watch similar to or identical to this one over at Target, Walmart, and Amazon. These watches are well-reviewed, with 4.4 out of 5 stars at Target and Walmart, and 4.5 out of 5 stars on Amazon. These outlets call it the iTOUCH Air Smartwatch, while Aldi’s site calls it the iTOUCH AirSmart Watch; I don’t know if it’s an error on Aldi’s part or if this is a slightly different watch. Either way, the pictures look very similar, so I assume the Aldi watch functions like the ones available elsewhere.

The Aldi watch is currently about $10 less than the ones at other outlets. That would seem to make this Aldi watch a potentially good deal.

Features of the watch include:

This watch does not appear to be have the phone-to-watch functions of some smart watches. That means you can’t read texts on this watch, for example.

The watch also does not appear to be waterproof, so you don’t want to go swimming with it.

The watch is designed to pair with a smartphone, and there are apps for the watch on both Google Play and the Apple App Store. Because the app is important to getting the most out of these watches, the app rating is important, and as of right now the Google Play app has 4 out of 5 stars across 4,300+ reviews while the Apple app has 3.3 stars across less than 20 reviews. It’s worth noting, first, that most people seem to like the Google Play version, and it’s also worth noting that many of the criticisms of the Apple app have to do with it switching back to Imperial (i.e. miles, Fahrenheit) from metric (i.e. kilometers, Celsius), which isn’t going to be a big problem for most Americans.

We haven’t tested this watch, so we can’t speak to how it operates, although the reviews of similar or identical iTOUCH watches on other sites are promising. We also don’t know what warranty the Aldi version has, although at other retailers it has a 1-year warranty.

Have any experience with this smart watch? Let us know in the comments!