Most days, I make my lunch myself: a simple sandwich, a cheese stick, and maybe an apple. Every once in a while, though, I benefit from something premade, especially if I’m tired or in a hurry. For a kid, one option for a speedy lunch is a Lunchable — or its equivalent — and I’m not above grabbing one of those for my own meal in a pinch. It’s nice to have more adult options, though, both for lunch and for smaller snacks.

So when I spotted this little snack tray at Aldi, I decided to try it out. 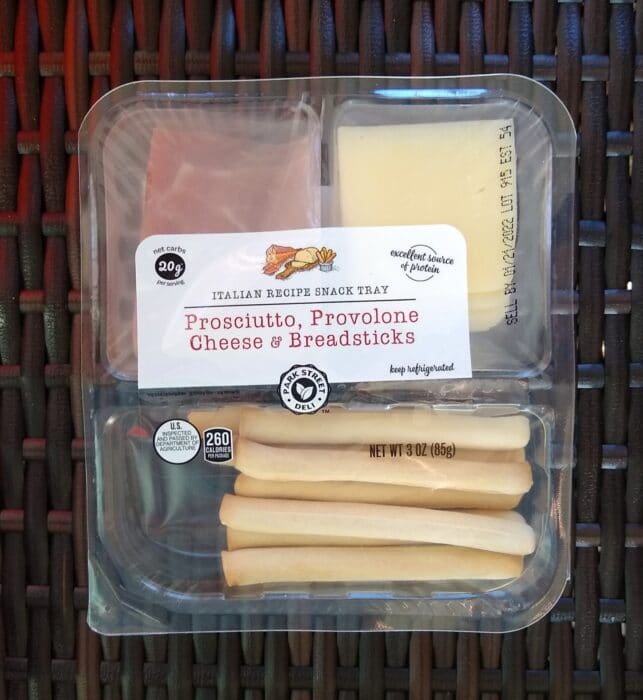 The Park Street Deli Italian Recipe Snack Tray is a Regular Buy, which means you can find it in stores all the time. At the time of this post, the tray cost $2.69 for 3 ounces of food, or about 90 cents an ounce. It’s a more premium price, but it’s also a more premium food. The one I got came with three components: prosciutto, provolone cheese, and breadsticks.

Opening the package is as easy as peeling back the film at the top … although the package doesn’t exactly tell you how to go about eating these. Do you eat them one at a time? Or do you eat them in close succession? Or do you wrap the meat and cheese around the breadstick?

I’m not sophisticated enough to know, so I took the third option, making little breadstick wraps with meat and cheese around them. They were quite good: the saltiness of the meat, the flavor of the cheese, and the crispness of the little breadsticks all mixed together nicely. They felt a little gourmet, even.

One drawback was the count.  There were maybe 9 breadsticks or so in my package, but only six or so pieces of cheese and only five or so pieces of meat. That means I had a few breadsticks that ended up without any accompanying meat or cheese, which was a small disappointment. It wasn’t the end of the world, as the breadsticks are fine on their own, but it did mean my plan to turn them all into little wraps didn’t quite play out.

Despite the relatively small size, there are a fair number of calories to this tray, along with sodium, fat, and carbs. This isn’t the healthiest of trays, so it might be better as a sometimes food than an everyday thing. 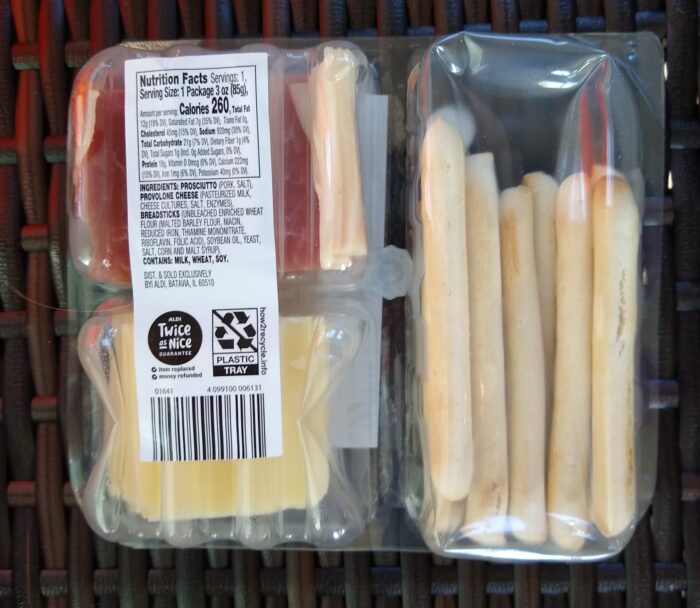 The Park Street Deli Italian Recipe Snack Tray with Prosciutto, Provolone Cheese, and Breadsticks is a small but tasty tray of breadsticks, meat, and cheese. The price is a little higher than your average Aldi food yet isn’t unreasonable, but the nutrition makes it better as a sometimes food than an everyday thing.