Right about now, you might be asking: what could a review possibly say about a belt? 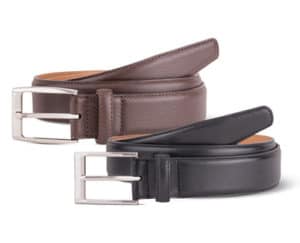 Royal Class is Aldi’s upscale men’s clothing line, such as it is. Over the years it’s featured polo shirts, wallets, khaki shorts, slippers, ties, and other things that feel mildly dignified.

And, of course, Royal Class sells a men’s leather belt.

Not much to say here. It’s a belt. It’s for men. It’s genuine leather. It comes in a few different sizes and either brown or black. It’s got a silver buckle. It’s designed for keeping your pants on your waist. 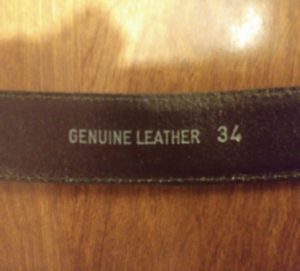 The inside of the belt.

I’ve owned one for a year as part of my regular rotation of business casual belts. It looks like other business casual belts I’ve owned: it fits just about right, and it’s held up well despite being the cheapest men’s belt I’ve ever bought. About the only difference I can see between this belt and other belts I’ve owned is that with this one the metal piece that slides through the hole moves a bit more up and down than on other belts. That isn’t an issue once the belt is fastened, as fitting it through the hole seems to more or less secure it in place, and the belt (and, by extension, my dress slacks) stays where it’s supposed to just fine. A real belt expert might be able to tell the difference, but the average person probably won’t be able to distinguish this from your standard department store men’s belt.

Aldi probably isn’t the first place you’d look for a business casual belt, but if you’re feeling a little adventurous, you might take a flyer on this cheap model. While it feels a bit flimsy at first glance, it works exactly like a belt is supposed to, and after a year of use it’s held up well for this reviewer.