If you’ve ever been to a cafe that does soups, such as the Panera Bread franchise, you may have come across French onion soup on the menu. It’s a delightful soup, with a tasty broth, onions, Swiss cheese, and croutons — the perfect meal for a cold day.

Every once in a while, Aldi rotates in their version of the soup. It’s $3.99 and found in the frozen section, and it comes in a small, two-serving cardboard box with the Bremer label on it: 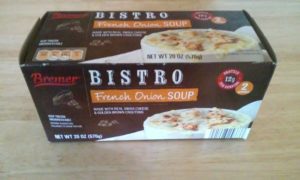 Inside the Bremer Bistro French Onion Soup box are two frozen bricks of soup. Literally. Each frozen brick is wrapped in plastic, and to make the soup all you have to do is pull them out of the plastic, cook them, and then eat.

The box gives you two options: microwave or conventional oven. Most of the time, when we face such a decision, we lean oven, since most things turn out better that way. In this case, we still lean oven, but be aware that there is a substantial difference in cook time and required cookware. The microwave directions take about 5-10 minutes; the oven takes 40 and needs some oven-specific cookware. We still suggest the oven directions, as the soup comes out better that way, but you’ll need some foresight if you plan to do so.

There is a bit of an art to both cooking instructions. The microwave instructions call for 3 minutes, stirring, then 2 more minutes or until the internal temperature reaches 160 degrees. The instructions warn that the microwave approach will mix the cheese in the soup, so for those purists who want a true French onion soup experience, the instructions also suggest adding your favorite cheese and broiling the soup in a conventional oven for two minutes. This gives the soup its iconic golden brown topping.

The oven method, likewise, takes a bit of work. The directions call for cooking the soup at 400 degrees for 40 minutes and until the cheese is golden brown, or until the internal temperature is 160 degrees. Unlike the microwave method, the oven method will produce a soup with cheese on top, but the oven method has its own complications. For one, the instructions don’t specify what to cook in; we use smaller Corningware dishes resting inside a large Pyrex dish, but whatever you use, make sure it’s oven-safe and large enough to accommodate the soup as it melts.

Also, as an additional oven tip: depending on what you use to cook them, the frozen soup bricks may slide around some in the containers you use. This can result in the cheese settling on the side of your dish and crusting on the dish rather than the soup itself. To prevent this, take a spoon and push the brick toward the center of your dish sometime around the 20 minute mark. Also, the soup will come out of the oven scalding hot, so give it a little time to cool.

So how is it? While a true soup aficionado would probably tell you there is no substitute for a homemade cafe soup, this is a pretty good substitute, all things considered. It tastes good and has a nice cheese coating on top. It doesn’t have quite the quantity of croutons that I’d like, but that’s not a terribly difficult thing to fix. It’s much better than what you’d get out of a can, and since it’s Aldi, the price is pretty good, especially for the quality.

It takes a little bit of work to make it, but the payoff is a good French onion soup that is a lot less hassle than a homemade version, a lot cheaper than a cafe one, and a lot better than what you’d get out of a can. Just make sure to follow our tips and you’ll be good to go. Definitely recommended.