I like beef jerky. I like the texture and the flavor, and I enjoy it as a snack, especially when my family goes camping. Aldi carries beef jerky and beef snack sticks, both of which are as good as their brand-name counterparts.

Biltong is a cousin to jerky, tracing its origins to countries in southern Africa. Like jerky, it’s dried and cured with salt into a tougher meat. Unlike jerky, however, it’s cured with vinegar in addition to salt, it’s cut into thicker slices, and it’s never smoked. The vinegar is particularly important, because it gives biltong a different taste from jerky.

Biltong is a specialty food that isn’t available everywhere, but a few places sell it. Aldi is one of them, selling it as an everyday Regular Buy. 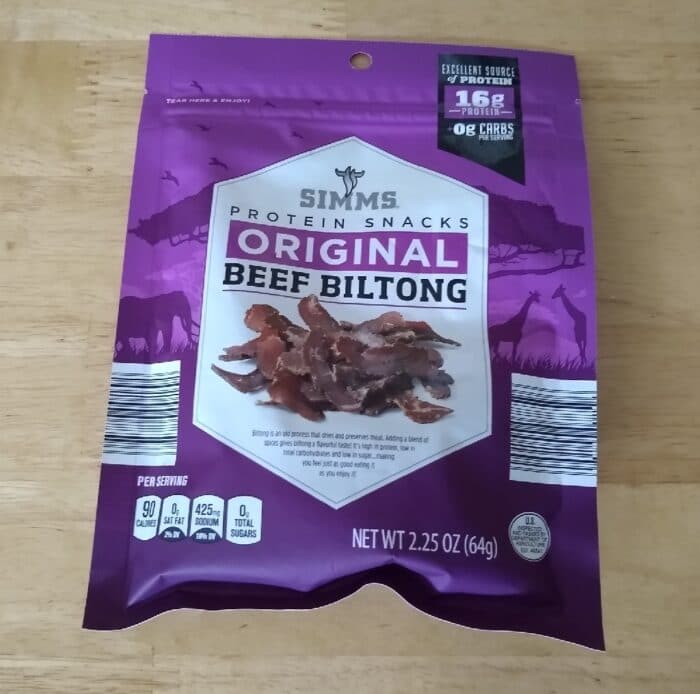 Simms Protein Snacks Original Beef Biltong is available in stores all the time. It comes in a 2.25-ounce plastic pouch with a Ziploc-style resealable opening at the top. It costs $3.99, or $1.77 an ounce. That’s a lot higher than beef jerky, but it’s also lower than the other biltong options in our area or online, even in bulk.

There are origin numbers — EST46541 — stamped on the back of our bag. According to those numbers, the biltong is made by Stryve Foods, which the USDA lists as based out of Oklahoma and its website is out of Texas. Stryve appears to be a company exclusively focused on biltong, selling its products under its Stryve brand in many stores.

In fact, Aldi sells Stryve Biltong on its shelves alongside Simms Biltong. In other words, you can pick up Stryve Biltong at Aldi if you want, but chances are you’re going to be getting biltong from the same source if you pick up the Simms bag instead.

I noticed a couple of things about the biltong. One, its consistency is more shredded compared to the jerky I buy, which makes it a little easier to eat. Two, it has a distinct vinegar flavor to it, the result of it being cured in vinegar. One my daughters thought it “tasted like ketchup,” which is also made with vinegar.

Biltong is a surprisingly healthy food. A full bag is 210 calories, with 2 grams of saturated fat and almost no carbs. It’s higher in sodium, but it’s still lower in sodium than Aldi beef jerky. 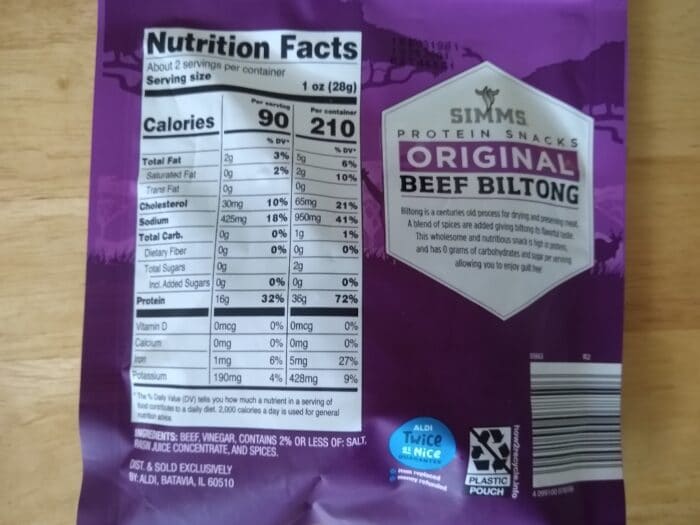 Aldi biltong is an interesting snack that is generally healthy. Whether you like it or not will depend on what you think of the vinegar-and-salt flavor.