When I was a kid, my parents used to buy Slim Jims, those curious sticks of meat that “Macho Man” Randy Savage would endorse in commercials. Slim Jims were tasty snacks, and also easy to eat, as they came in self-contained packs.

Original Slim Jims were a curious concoction of beef, pork, chicken, and other ingredients that gave them their distinct flavor. Aldi has since developed its own imitation of a Slim Jim in the form of Simms Mild Smoked Snack Sticks. But in recent years, turkey has become a popular substitute for other meats due to its purported health advantages, and, lo and behold, we got a Slim Jim Turkey Stick. So Aldi went and made one of those, too. 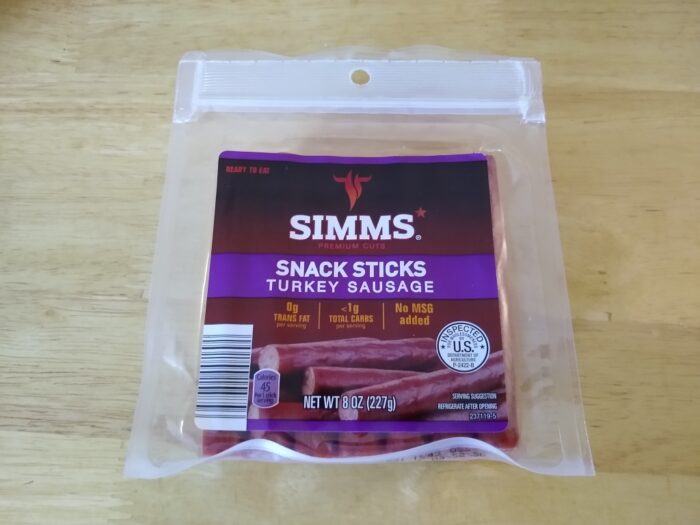 Simms Turkey Sausage Snack Sticks are a Regular Buy, meaning you can find them in stores all the time. At the time of this post, they cost $3.49 for a package. At 43.6 cents an ounce, that’s a lot less than the 68 cents an ounce we paid for the original snack sticks. One possible reason is that they come in a single 8-ounce resealable Ziploc-style bag containing approximately 14 sticks, as opposed to individually wrapped packs or sticks.

Because of that, there’s an important consideration here: refrigerate these after you open them. If you’re used to snack sticks, you’re probably used to getting individually wrapped ones. These are not, and because that can be different than what you’re used to, it’s very easy to toss these back in the pantry like you might with individually wrapped snack sticks or beef jerky. Instead, they’re more like bacon bits, which also need to be refrigerated after they’re opened, as they come in a single pack.

The package indicates that these are made in the USA, and they have been inspected by the USDA.

Nutritionally, these are of course processed, so they include various additives, including the preservative sodium nitrite. The only listed meat is turkey, and the package claims they are gluten free and, like all Aldi products, free of MSG.

I was curious about how they compared to a standard Simms Snack Stick, which is more or less like a Slim Jim. A regular snack stick is half the size of one of these, so when you double a standard 8-gram snack stick, you get an apples-to-apples comparison. When I did that, I found the turkey sticks to be mostly healthier: 16 grams of turkey stick versus 16 grams of a standard stick is lower in calories (45 versus 85), fat (8 grams versus 3 grams), and sodium (190 mg versus 240 mg). The two are about the same in cholesterol. 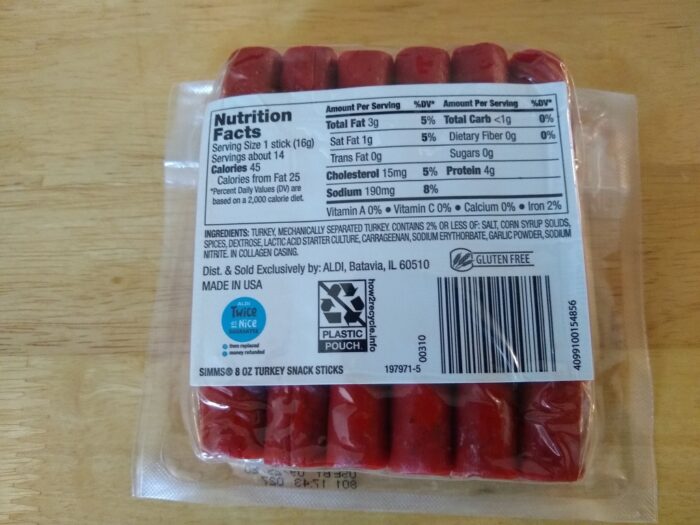 As for taste? I can’t say I liked these as much. In terms of texture, they’re similar — a tougher outer casing with a softer middle — but the turkey taste wasn’t the same. Not everyone will agree, but I found the regular snack sticks superior enough that I wasn’t sure, even with the health differences, that these were worth it.

If you’re looking for a healthier alternative to a standard Slim Jim-style snack stick, these turkey sticks are healthier in most ways, and they’re also cheaper. I didn’t like them as much, though, so if having that exact taste is important to you, these may or may not cut it. Also, do not forget to refrigerate these after opening, as they are not individually packaged.