When I was a college student, I spent a couple of summers working as a counselor at a youth camp where the food served in the dining hall was surprisingly good. I remember some delicious meals there, including biscuits and gravy as well as French toast with strawberries and whipped cream. At the end of the the season, the camp hosted a special dinner for donors, supporters, and staff. It was at one of those celebratory dinners that I first tried beef Wellington — a cut of steak or tenderloin coated in seasonings and wrapped in puff pastry.

When cooked and sliced, beef Wellington has a striking appearance with the meat in the center and the pastry around the outside. Beef Wellington has its origins in England, and historians think it was named after Arthur Wellesley, 1st Duke of Wellington, but it’s not certain.

Aldi recently sold several types of salmon Wellington, a variation on beef Wellington. Remembering that camp meal, I had to pick up a box to try. 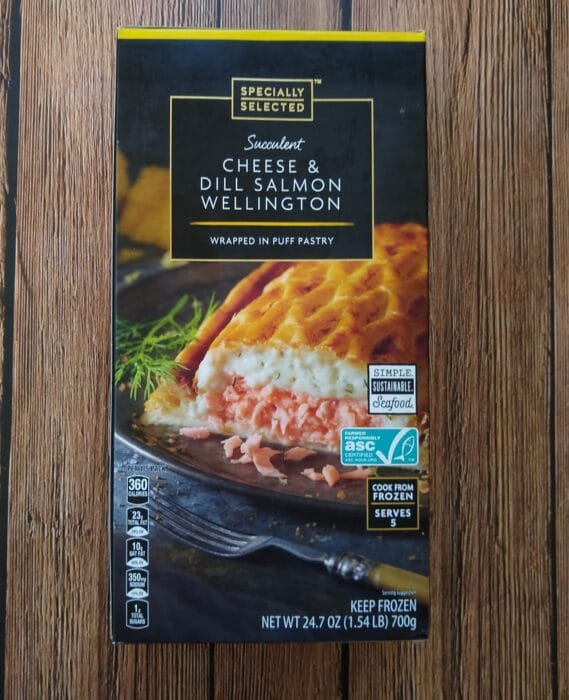 Specially Selected Cheese and Dill Salmon Wellington cost $7.99 for a 24.7-ounce package at the time of publication. Aldi also sold some salmon Wellington with shrimp and white wine, but I didn’t buy that one.

This is an Aldi Find, so it’s only in stores for a short time. Aldi does not offer online ordering for its specials after they sell out at your local store.

The salmon was farmed in Norway and Chile, and the prepared meal is a product of Poland. It is Aquaculture Stewardship Council certified.

If you’re looking out for allergens, this contains fish (Atlantic salmon), wheat, milk, and egg. The package also warns that “although every effort has been made to remove bones, some small bones may remain.” 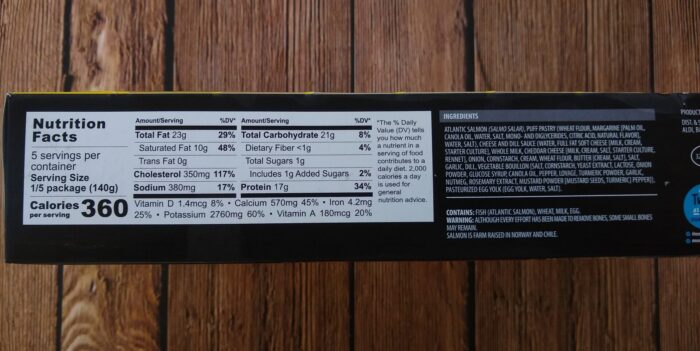 This salmon Wellington is cooked from frozen. To prepare it, remove all packaging and preheat your oven to 395 degrees Fahrenheit. Place the product on a baking tray on the middle shelf of the preheated oven. Bake for 50 minutes or until thoroughly cooked and piping hot throughout. Allow the product to rest for 5 minutes prior to serving.

The package states this is not suitable for microwave cooking. 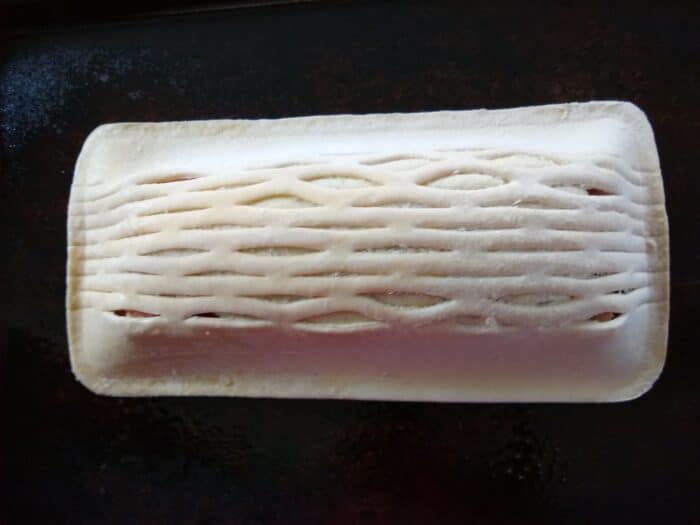 Frozen salmon Wellington, ready to go in the oven.

This was easy to bake; just drop it on a tray and pop it in the oven. Mine was done in exactly 50 minutes. The directions don’t say to put cooking spray on the baking sheet ahead of time, but I lightly sprayed it just in case, and the salmon Wellington didn’t stick at all. 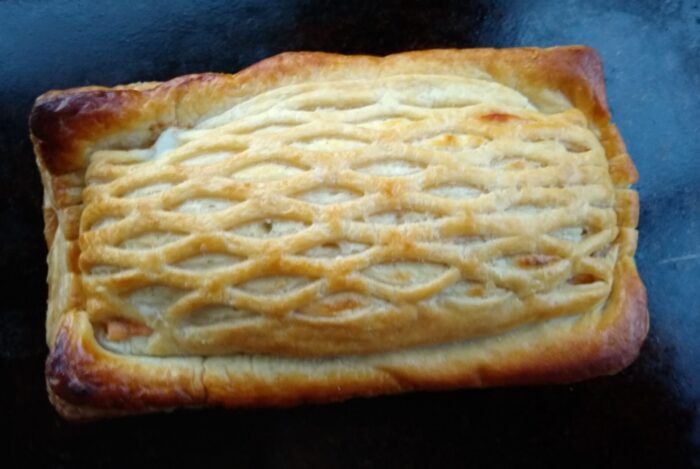 Golden brown and crispy after baking.

My family — who don’t all love fish, depending on what kind is being served and how it’s prepared — liked this salmon and ate multiple helpings. The salmon fillet is decently sized, and there is plenty of cheese sauce, although it has more of a mild creamy flavor rather than a cheesy flavor. The dill flavor is also pretty mild. As for the pastry wrapper, it’s crispy and flaky and quite good. 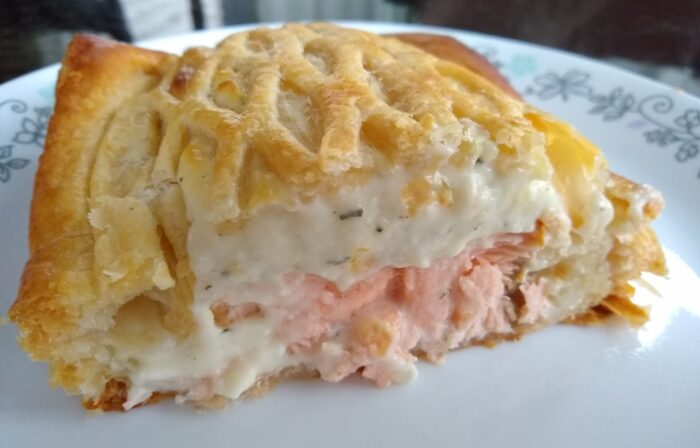 While all the additional ingredients such as the cheese sauce and the pastry don’t make this the healthiest dish in the world, if you’re trying to work some fish into your diet, this is a unique way to serve it. When served alongside some steamed veggies or a garden salad, it makes a complete meal.

Specially Selected Cheese and Dill Salmon Wellington features Atlantic salmon and cheese sauce wrapped in flaky pastry and baked to golden brown perfection. It’s a nice twist on traditional beef Wellington and worth trying if you’re looking for something different for your dinner table.