From time to time, Aldi likes to trot out a pair of seafood-pasta dishes as part of its frozen Special Buy rotation. Let’s take a look at them.

This particular frozen entree comes in your standard frozen plastic tray covered in film. There are two ways to cook it: conventional oven and microwave. The conventional oven instructions, which are listed as preferred, involve preheating the oven to 400 degrees, removing the tray from the sleeve, peeling off the film, and then cooking the tray on a baking sheet for 40 minutes, or until the internal temperature is 165 degrees. Once cooked, you let sit for two minutes before eating.

The microwave instructions, by contrast, call for piercing the film 3-4 times, then cooking on high heat for 8-9 minutes, following by allowing it to stand for one minute before stirring and serving.

The box says the tray is good for two servings. It’s not a massive amount, but we thought it was generous enough for two people, especially if supplemented with a side or two, which makes a lot of sense (to us, at least) with a dish like this one.

Overall, this entree is pretty good. The pasta is good, with a solid white cheddar-style cheese sauce. Baking it gives it a little crispiness on top that you’ll be familiar with if you’ve ever baked macaroni and cheese. Most importantly, there are real, honest-to-goodness chunks of lobster meat in the mixture. My biggest fear on something like this was that it would scrimp on the lobster, but that’s not the case — there’s plenty here, enough that you’ll feel like it’s a real lobster mac and cheese, not a mac and cheese with bits of lobster in it. 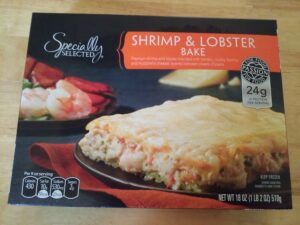 The Shrimp and Lobster Bake has identical cooking instructions as the Lobster Mac & Cheese, both for the conventional oven method and the microwave approach. This means, conveniently, that you can cook both trays together in the oven or perhaps in a large microwave.

Unlike the Lobster Mac & Cheese, which is a macaroni style dish, the Shrimp and Lobster Bake is more like a thinner version of seafood lasagna. The sauce is a combination of tomato and cheese, and there are both mini-shrimps and bits of lobster scattered about the bake. Like the Lobster Mac & Cheese, the seafood component feels like a real part of the dish rather than an afterthought, and while the two-serving amount isn’t huge, it’s good for two people, especially if you throw a side or two into the mix for good measure.

This tastes different from the Mac & Cheese — the tomato base is one reason — but it’s good on its own merits. We’re not sure it’s quite as good as the seafood lasagna recipe we like to make, but this is pretty good anyway, and it’s a lot faster, even in the oven, than cooking up a recipe from scratch.