EDITOR’S NOTE: Updated October 2020 to reflect a change in this product’s name, from Stonemill Who Needs the Bagel? Seasoning to Stonemill Everything Bagel Seasoning. This product is also now a Regular Buy at Aldi, so it should be available any time of year. View our recipe for Everything Bagel Chicken here.

In my mind, it conjured up the notion of throwing everything imaginable — from bacon to ice cream — on a bagel. Of course, that’s not exactly what an everything bagel is: instead, it uses every topping the bakery has for their bagels, typically things like sesame seeds, garlic flakes, salt, and pepper. It’s a novel concept.

And, proving the point that crazy ideas come from all kinds of obscure places, someone decided that, “hey, we should make a seasoning just like you’d put on an everything bagel, and put it in a jar, and sell it as a seasoning that you put on just about everything.” I’m not sure who thought it up first, but Aldi’s distant cousin Trader Joe’s Everything But the Bagel Seasoning is generally considered the trend-setter in this niche, so much so that TJ’s has seen fit to actually sell other products with the seasoning already on it.

Aldi appears to have jumped on the bandwagon with its own blend. 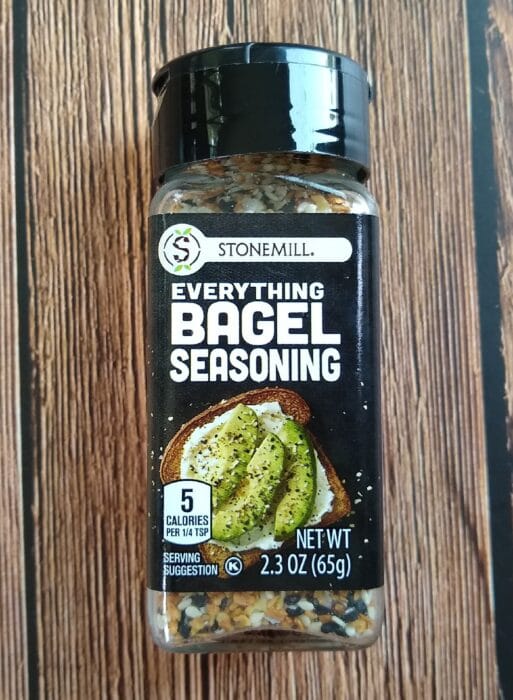 Stonemill Everything Bagel Seasoning began as a limited-time Aldi Find, but now it’s a Regular Buy in stores year round. It comes in a 2.3-ounce glass jar and costs $1.95. This is the same size and nearly the same price as the Trader Joe’s seasoning, and the ingredients list is mostly the same, too.

My first impression is that it tastes like … well, an everything bagel. The ingredients are what you’d expect: sesame seeds, sea salt, minced garlic, minced onion, black sesame seeds, and poppy seeds. It goes just fine on a bagel, of course, but what’s really interesting is that, like other seasoning blends, this is a versatile seasoning mix. You can put it on vegetables, meat, chicken, breads, salads, eggs, or any number of other things … even avocado toast, if that’s your sort of thing. It reminds me a little of say, Mrs. Dash or a chicken grill seasoning, not necessarily in terms of exact taste, but in terms of the general concept: a spice mix can be a great weapon in the culinary arsenal. 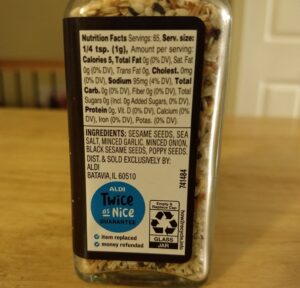 We tried it out in a few contexts, and it works. I think it makes a great salad topping, for example, especially with a quality dressing and a little cheese. We also tried it on eggs — both scrambled and over-easy — and it added a nice seasoning to them. We also like this sprinkled on Aldi hash brown patties.

There are a million lists out there suggesting what you can sprinkle it on, but really, I think it comes down to what you think would benefit from, say, a salt / garlic / onion sprinkle. If it might, this should be close at hand.

One final tip: a little of this goes a long way, especially in terms of adding saltiness. Just a quick couple of shakes can add a good flavor … and remember, you can always add more if you want.

As a marriage between your classic spice mix and an everything bagel, this Stonemill Everything Bagel Seasoning is a versatile, fun concoction to sprinkle on meats, veggies, and just about anything else.