Drones are having a moment right now. They’re particularly popular in the world of photography, but they’ve also become a big thing for hobbyists. There are a lot of reasons for this, including the fact that the cost barrier to entry is much lower than it used to be. That’s not to say that you can’t spend thousands of dollars on a drone — you most certainly can — but you can also get into the world of drones for relatively cheap, too. 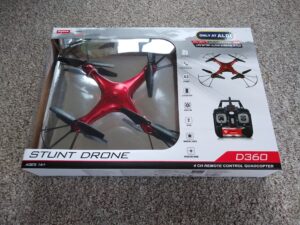 The Syma Stunt Drone is an ALDI Find, which means it’s only in stores for a short time. The drone runs $29.99 at the time of this post, which is — no surprise — on the cheaper end of drones out there. It was even cheaper in the past, retailing for $24.99 the year before. It shows up around the Christmas holiday season, no doubt to attract the attention of people looking for things to put under the tree. It comes either in red and black or white and black.

It’s made by Syma, a company that specializes in remote controlled toys, including drones, helicopters, and boats. This particular drone, however, is an Aldi exclusive.

Out of the Box

The package comes with: 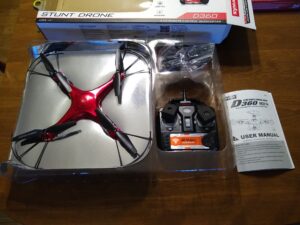 One thing it doesn’t come with: a warranty. While you can return it to Aldi if need be, and there is customer support information on the box and in the manual, the manufacturer will not replace a crashed drone. Fly at your own risk.

According to Aldi as well as the packaging, the drone’s features include:

That last point is worth emphasizing: while this is a toy, it’s complex enough that it’s best for older children. A 2nd grader is going to have a lot of trouble steering it.

There are a few steps involved with setup, although none of them are terribly hard. The protection gear is already pre-installed, so with regard to the drone the only other pieces that need to be added are the foot stands and the caps that go over the propeller screws.

Beyond that, it’s just a matter of power. The drone battery is recharged using a USB that plugs into a computer or other USB charging device. The remote, meanwhile, requires 4 AA batteries, which do not come with the package.

I’m not an experienced drone operator. On one hand, that means I can only speak to how this drone operates as someone who has never operated a drone before. On the other hand, I’m probably the target market for this kind of device: an entry level drone sold by a grocery store around the holidays is almost certainly aimed at people with little or no experience with drones.

Activating the drone is a three-step process. One, you hold down the button on the drone until it turns on. Two, you power up the remote. And three, you push the throttle all the way up and then all the way down to get things ready to go.

The drone has red lights and green lights that signify the front and back of the drone. This helps you orient yourself as you turn the drone around, and gives you an idea of where it’s going. The remote has two control modes, with the default mode (mode 1, as it’s called in the manual) being the suggested mode for newbies. Under this mode, the left stick is used for throttle and turning, while the right stick is for moving forward and back, as well as strafing left and right. There are also buttons that can be used for more fine-tuned movements next to both joysticks. 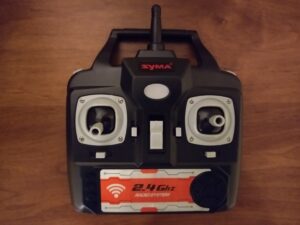 Here are my preliminary thoughts.

For my first few tests, I took the drone out to a large field at a nearby elementary school. If you, like me, have never flown a drone before, I strongly recommend someplace open and grassy to put it through the paces. There’s a learning curve to flying a drone in airspace if you’ve never flown a drone before, and I was surprised how easy it is to have the thing go off in the wrong direction or come crashing to the ground. A grassy field does wonders for lessening the damage.

I found the drone to be pretty responsive. It reacted to my controls, and it went the direction I pushed it. The throttle is responsive and the drone turns and strafes the way it’s supposed to. The lights help with orientation, and in the event things start to go awry it’s not hard to pull down the throttle and send the drone to a (mostly) gentle landing. Doing stunts is as easy as pushing the stick all the way in one directionand pressing a button.

The battery is good for 12 minutes. That’s not a ton of time, but it is enough to get in a decent session.

If you’re looking for an entry-level drone, this is a pretty good option. It’s easy to set up, responsive in the air, and also not so expensive that you worry about losing a fortune because of human error.

Are you an experienced drone flyer? Have you used this drone? We’d love to hear your thoughts in the comments.