There are two camps when it comes to pasta sauce. Some people prefer red sauce or marinara sauce, which is tomato-based and featured in classic dishes such as spaghetti and lasagna. Other people like white sauce or alfredo sauce, which is made with cream, butter, and sometimes eggs and goes well with all kinds of noodles. Alfredo pasta also pairs nicely with grilled chicken or seafood such as shrimp and scallops. Sometimes, you can mix both red and white sauces to create a unique coral sauce, which I sometimes do when I make lasagna using oven ready lasagna noodles from Aldi.

Most of the time, I enjoy indulging in a rich, creamy alfredo sauce. If I’m feeling adventurous, I’ll make it from scratch, which is not difficult to do and just requires a little extra time versus opening a jar and dumping it over my cooked pasta. More often, though, I buy store-bought alfredo sauce. Aldi sells a few different types of alfredo sauce that have mixed reviews among customers. Trader Joe’s, which is a cousin to Aldi, also sells its own alfredo sauce. 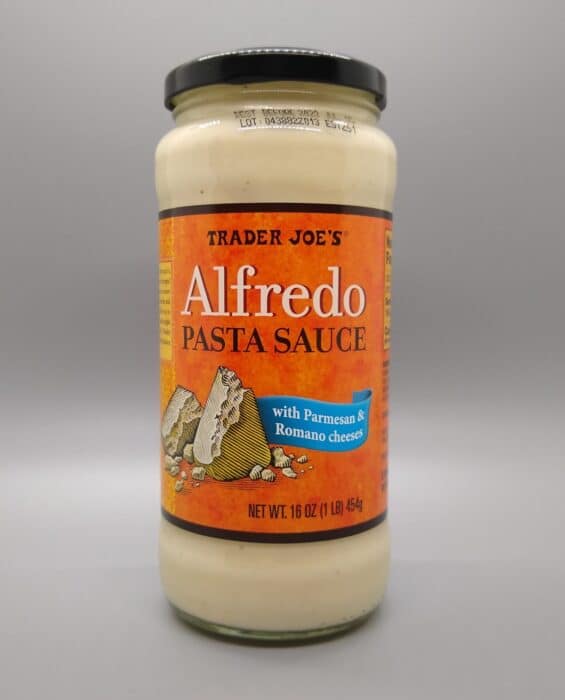 Trader Joe’s Alfredo Pasta Sauce cost $3.29 for a 16-ounce jar at the time of publication. This is made with Romano and Parmesan cheeses, and it’s a product of Canada.

Alfredo sauce dates back to Italy in the 1920’s, when Alfredo di Lello perfectly merged heavy cream, butter and garlic to create an international sensation. We searched far and wide for an Alfredo Sauce that could live up to this reputation and found one with just the right blend of these classic ingredients. Try Trader Joe’s Alfredo Pasta Sauce on grilled chicken, broccoli and fettuccine noodles.

If you’re looking out for allergens, this contains milk and egg. 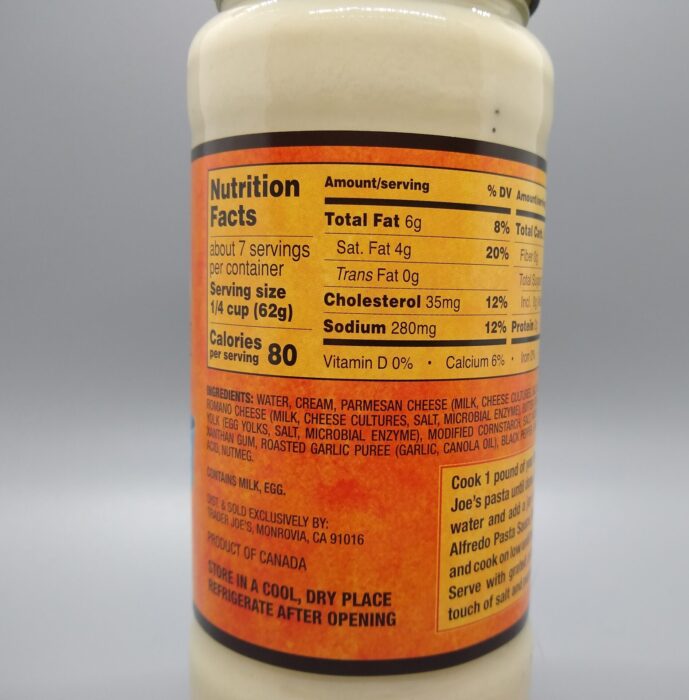 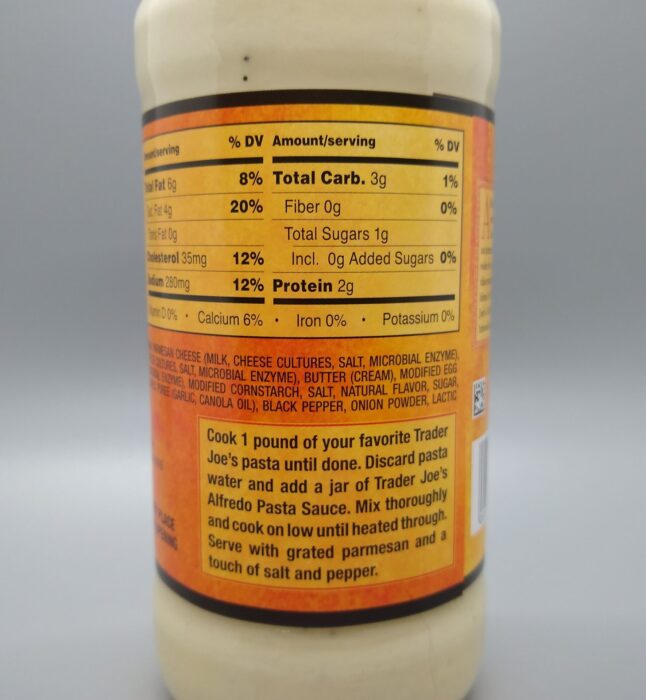 Pasta sauce like this is pretty self explanatory. However, the jar recommends cooking 1 pound of your favorite Trader Joe’s pasta until done. Discard the pasta water and add a jar of alfredo pasta sauce. Mix thoroughly and cook on low on the stove top until heated through. Serve with grated Parmesan cheese and a touch of salt and pepper. 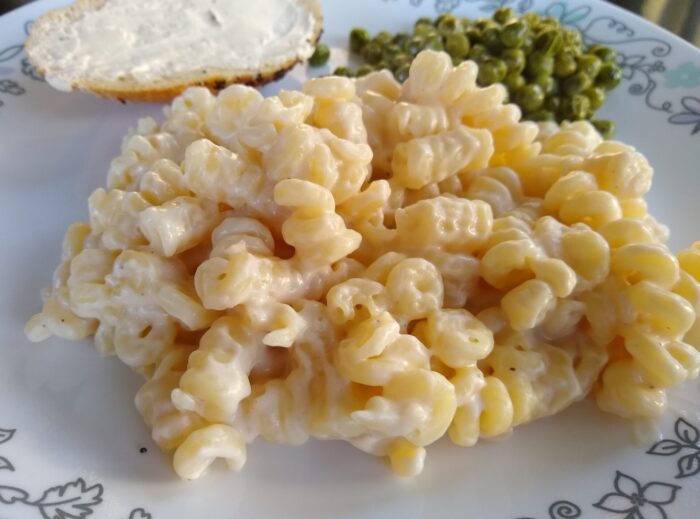 I mixed this alfredo sauce with some cooked Trader Joe’s Organic Fusilli Corti Bucati Pasta, which I wanted to try because of its unique shape. (Some TJ’s fans fondly call it “phone cord pasta” because it looks like an old-school curly telephone cord.) I served the pasta alongside some veggies and some buttered everything sourdough bread from Aldi.

The alfredo sauce is rich and creamy, and it was just enough to serve with my 16-ounce pasta package from Trader Joe’s. I don’t think this is as good as homemade or restaurant alfredo sauce. No jarred sauce really is. However, I do like it better than the Priano private label alfredo sauce Aldi sells. My family generally agreed.

Trader Joe’s Alfredo Pasta Sauce is a good jarred sauce that is better than some other store brands we’ve tried. It can be served with any kind of pasta. We tried it with Trader Joe’s unique Organic Fusilli Corti Bucati Pasta.