When fall hits, there are some things you just start pining after. Hot drinks, chili, and, of course, anything pumpkin. Just as much a part of the harvest season is that most special of drinks, apple cider.

And Aldi has it. 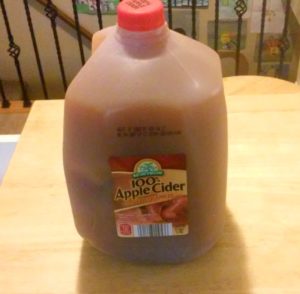 Nature’s Nectar 100% Apple Cider comes in a typical 1-gallon jug and is a Seasonal Buy — it’s around for longer than a Special Buy (ALDI Find) but is not a year-round Regular Buy. The packaging describes it as 100% juice, and it’s pasteurized. There are two ingredients: apples and potassium sorbate, a preservative commonly used in apple cider. The packaging does not give any indication where the apples were grown or where the cider was processed.

At the time of this post, it retailed for $3.49, or about 2.7 cents an ounce. This is among the cheapest options we’ve seen for apple cider — it’s about a third of the cost of our local farmer’s market, about half the cost of name brand cider at our local store, and significantly less than the generic cider at our local grocer. We don’t mind supporting our local farmers from time to time, but we have to admit that the Aldi cider is every bit the bargain we’d hope Aldi cider to be, and then some.

Does that mean you sacrifice for taste? We don’t think so. It tastes like any cider we’ve had anywhere else — sweet and tart, with just the right amount of each.

Nutritionally, the cider is 120 calories for an 8-ounce serving. The cider is high in natural sugar — 28 grams per serving — but also contains 25% of your daily allowance for Vitamin C, so there is some nutritional value. Apple cider isn’t exactly something you drink strictly for health, but it has some benefits in moderation. (It may also have some health benefits over apple juice.)

If you’re an apple cider fan and you want to drink it on a budget without sacrificing taste, Aldi’s apple cider is a no-brainer. Nature’s Nectar 100% Apple Cider tastes like any other cider, and for cheaper than other competitors we know of. Highly recommended.