Orchards aren’t the only places to get apple cider donuts. They pop up in many grocery stores during the fall, including Trader Joe’s, which is Aldi’s cousin. Trader Joe’s is one of my favorite places to shop for fall-themed treats. 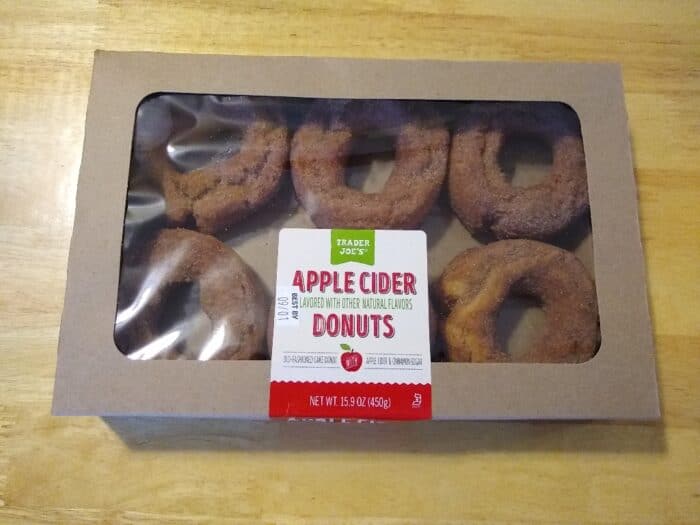 Trader Joe’s Apple Cider Donuts cost $3.99 at the time of publication for a 15.9-oz. box containing six donuts, which comes out to about 67 cents per donut.

I found these near the other baked goods not far from the produce section at Trader Joe’s.

These are described on the box as old-fashioned cake donuts made with apple cider and cinnamon sugar. They are kosher.

The first few ingredients are unbleached enriched flour, sugar, and palm oil. You can read the full list of ingredients in the photo below.

If you’re keeping an eye out for allergens, these contain milk, egg, soy, and wheat. 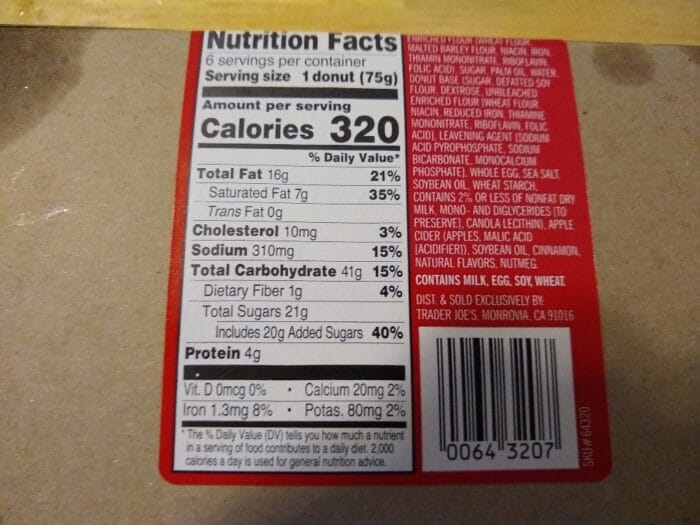 In other words, these are not surprisingly loaded with calories, carbs, and sugar.

With that said, these taste great. They are soft and full of apple flavor, with a nice cinnamon and sugar outer coating. You can eat them at room temperature right out of the box, or I heated my donut in the microwave for about 12 seconds.

When I bought these donuts, the TJ’s employee at the checkout remarked, “Good choice!” He also encouraged me to eat them soon, because they are fresh baked. He said they can get a little hard if they sit around too long. I bought my donuts on a Friday, and they had a best-by date of Tuesday the following week. So keep in mind that these may not last forever in the pantry or on your kitchen counter.

Trader Joe’s Apple Cider Donuts are the perfect fall treat. They have good apple flavor and a satisfying cinnamon and sugar coating. Eat them at room temperature, or microwave them for a few seconds to eat them warm.