Fall is a wonderful time of year at the grocery store, when all sorts of goodies show up on the shelves.

It is possible to go overboard with the autumn treats, as evidenced by the pumpkin spice-ification of everything, and sometimes it’s just wrong.

But even if you aren’t a fan of pumpkin spice everything, you can still find plenty of traditional favorites during this time of year. Some top contenders at Trader Joe’s, which is Aldi’s cousin, include apple cider donuts, apple cider jam, pumpkin rolls, pumpkin tea, and of course good old apple cider.

Trader Joe’s Apple Cider cost $3.99 for a half gallon (64 fluid ounces) jug at the time of publication. 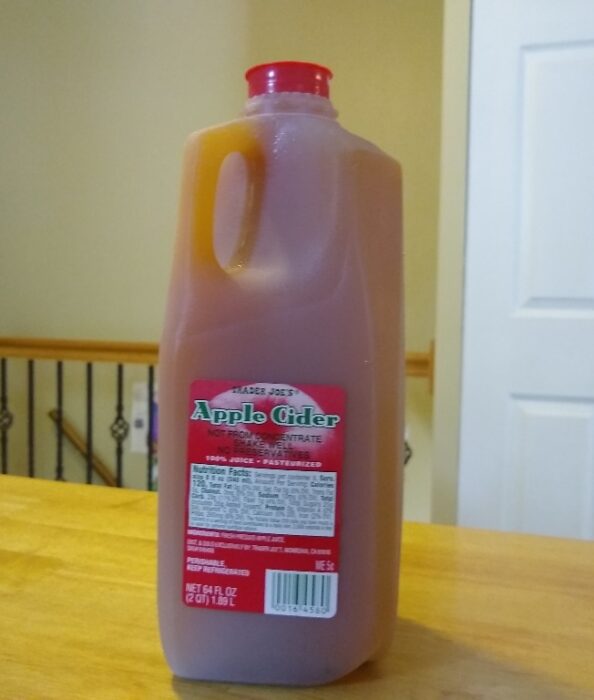 It’s made with 100% juice, not from concentrate, and it is pasteurized. It’s found in the refrigerated section at the store.

The jug does not give any indication of where the cider is made, except that it is distributed and sold by Trader Joe’s, based out of Monrovia, California. Based on country of origin labeling laws, I assume it’s made somewhere in the U.S.

The only ingredient is fresh pressed apple juice. (In this way, the Trader Joe’s cider differs from the gallon jugs of cider that Aldi sells because the Aldi cider contains the preservative potassium sorbate in addition to apples.) 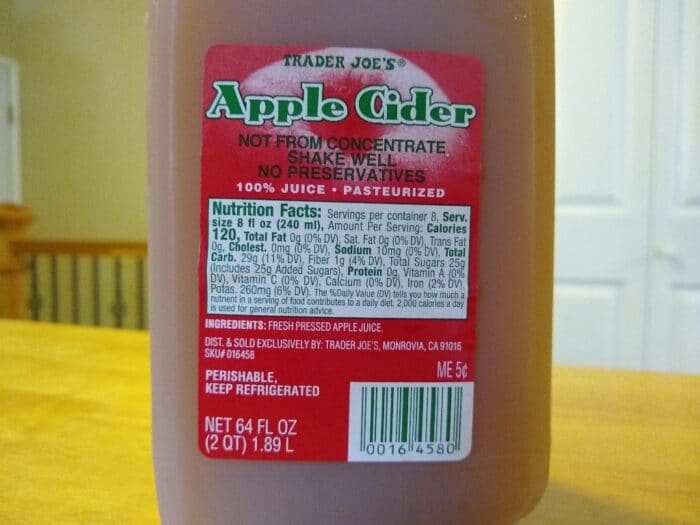 It should be kept refrigerated. When serving, shake the jug well before pouring into glasses.

This tastes like most other apple ciders I’ve had over the years. It’s both sweet and tart, with the classic cloudy but not pulpy look of apple cider (hence, the reason why the jug should be shaken well before serving).

Trader Joe’s Apple Cider is a good choice if you’re looking for a tradition fall indulgence. It’s pasteurized, contains only 100% fresh pressed apple juice with no preservatives, and is sold by the half gallon.