I’ve always been fascinated by the appetizer menu at local restaurants. Onion rings, stuffed mushrooms, fried calamari, wings, and nachos are just a few of my favorite little things to try. On rare occasions, I’m even known to take an appetizer sampler platter as a full entree.

I really like breaded cheese sticks. From the breading to that signature mozzarella flavor, they are, in my view, one of the high points of an appetizer platter and the appetizer menu in general. Grocery stores often sell them, too, but for the most part they don’t really compare to the ones I get in restaurants. (Sorry, Aldi.) Still, I’ve always kept an eye out for different options, in hopes that maybe some of them will come a little closer. 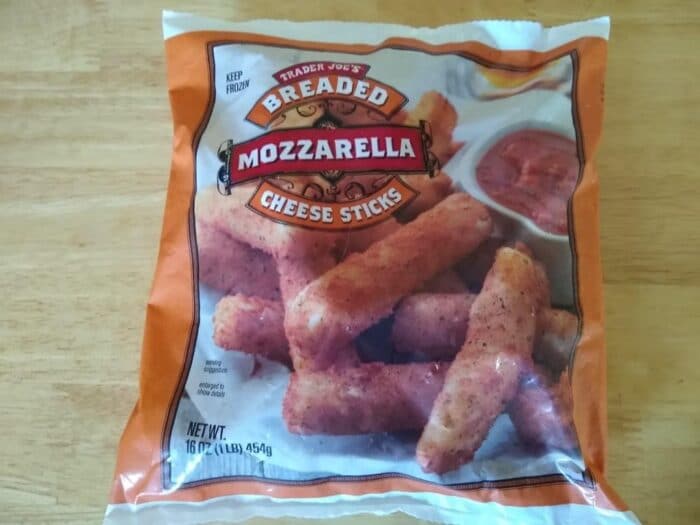 Trader Joe’s Mozzarella Cheese Sticks can be found in the TJ’s frozen section. They come in a 16-ounce bag and cost $4.49 at the time of publication, or about 28 cents an ounce. That’s a fair bit more than the 18 cents an ounce the Aldi sticks currently cost, although in my experience it’s competitive with most grocers out there.

One downer: the cheese sticks don’t come with their own marinara, so you’ll have to get that separately if it’s important to you. We used Aldi’s Simply Nature Organic Marinara Pasta Sauce, which paired perfectly with our cheese sticks.

Preparing them is pretty simple, as you heat them directly from frozen. The package only comes with baking instructions, calling for preheating the oven to 425 degrees, placing the sticks on a non-stick cooking sheet, and heating for 9-10 minutes, or until they reach an internal temperature of between 135 degrees and 170 degrees.

Alternatively, you could also use a deep fryer or air fryer. We cooked ours in an air fryer, cooking them at 400 degrees. We ended up cooking them about 8 minutes or so, but since air frying is a bit of an art, you’ll want to eye them carefully.

We found the taste to be very good. The breading was crisp, and, just as importantly, the cheese was generous and tasty.

Nutritionally, these are pretty bad for you. Aside from the processed ingredients, just three sticks gives you a load of calories, saturated fat, and sodium. They also have plenty of protein and calcium, but that doesn’t really make up for the unhealthy stuff. 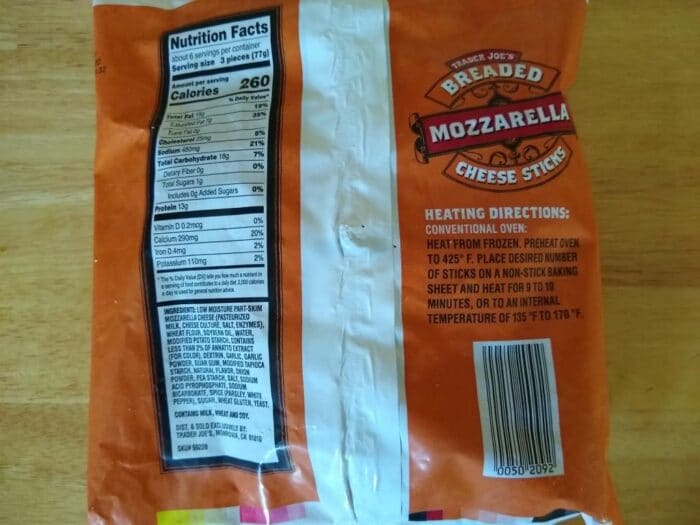 Trader Joe’s makes pretty tasty mozzarella breaded cheese sticks, but they are also high in the bad stuff. If you like this kind of appetizer, these definitely hit the spot, but they’re strictly meant to be enjoyed in moderation. Marinara sauce, unfortunately, is not included.