Aldi does Mexican food pretty well, offering a range of taco shells, seasoning, refried beans, and an array of frozen food. Sometimes the grocer’s weekly specials even include Mexican-themed food such as fajita kits, burritos, and kitchen accessories that include tortilla holders and special plates that hold tacos upright.

As any fan of homemade Mexican or Tex-Mex food knows, if you make your own guacamole dip at home, it can be hard to keep it from turning brown. That’s because the avocados, the primary ingredient in guacamole, start to turn brown after being sliced open and exposed to the air. I squeeze the juice from one lime into my homemade guacamole to slow the browning process. Other people like to use special storage containers made just for guacamole.

Aldi is selling one of those guacamole storage containers in April of 2020. 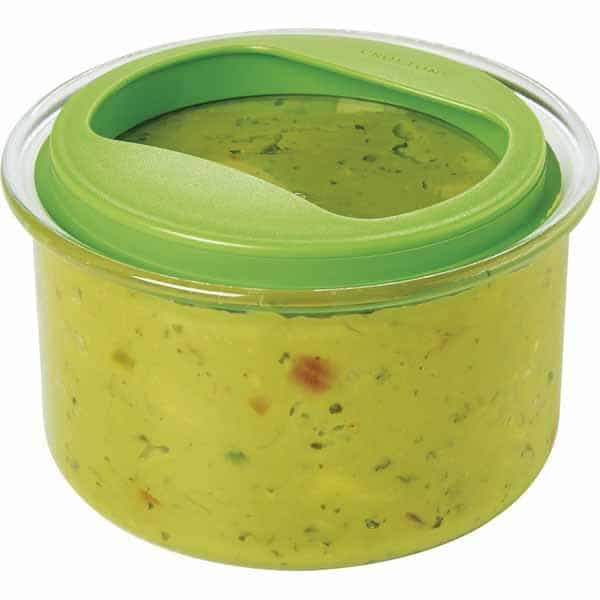 The Crofton Guacamole Keeper cost $6.99 in April of 2020. It has a four-cup capacity. While Aldi sells different varieties of guacamole both as a year-round Regular Buy and as a rotating Aldi Find, as far as we can tell, this is the first time Aldi has sold any kind of guacamole keeper.

The Guacamole Keeper is an Aldi Find (Special Buy), which means it’s only in stores for a short time, so just as you act quickly to eat your guac before it browns, you’ll want to move fast if you want to score one of these little gadgets.

Aldi’s Crofton Guacamole Keeper looks similar but not exactly identical to this other guacamole keeper made by Prepworks by Progressive that costs nearly $3 more on Amazon at the time of publication.

Here’s how this type of guacamole keeper works: first, fill the container with guacamole. Then, the container’s lid is adjustable and can move up and down inside the container, so you push the lid down into the guacamole to push most of the air out of the container. Then store your dip in the refrigerator.

It’s a simple concept, and you’re basically trying to reduce the avocados’ exposure to oxygen, which is what causes the browning. How well it works is something I’m not sure about, since I’ve never used a guacamole keeper like this, and guacamole disappears so quickly in my house that it hardly has time to turn brown. If you live alone or are the sole guacamole lover in your house and don’t go through dip very quickly, this inexpensive device might be worth a try.

We have not tried Aldi’s Guacamole Keeper, so we don’t know how well it works. We don’t know if it comes with any kind of warranty, but given its low price, probably not.

Have you used Aldi’s Crofton Guacamole Keeper? Tell us what you think of it in the comments.