If you go to a restaurant and you order a salad, you typically are going to be offered a certain set of options. Ranch. Italian. Possibly a vinaigrette. Maybe some sort of house special dressing. While they’re different dressings, the base salad ingredients — lettuce and other veggies — are often similar.

On the other hand, if you order Caesar, things change, with potentially different croutons and shredded or grated Parmesan rather than, say, cheddar. In fact, Caesar salads are so different that they often have their own spot on a menu, separate from the other salads.

Caesar is the third most-popular salad dressing in the United States, trailing only Ranch and Italian, and it enjoys a wide following. Named after its apparent creator, an early 20th-century Italian immigrant to the United States, you can now find it in both restaurants and grocery stores. Aldi carries a very good Little Salad Bar Caesar Salad Kit as well as an equally good Little Salad Bar Caesar Salad Bowl, but you can also buy Caesar dressing in Aldi by the bottle under the Tuscan Garden label.

The question is, are all the Aldi Caesars the same? 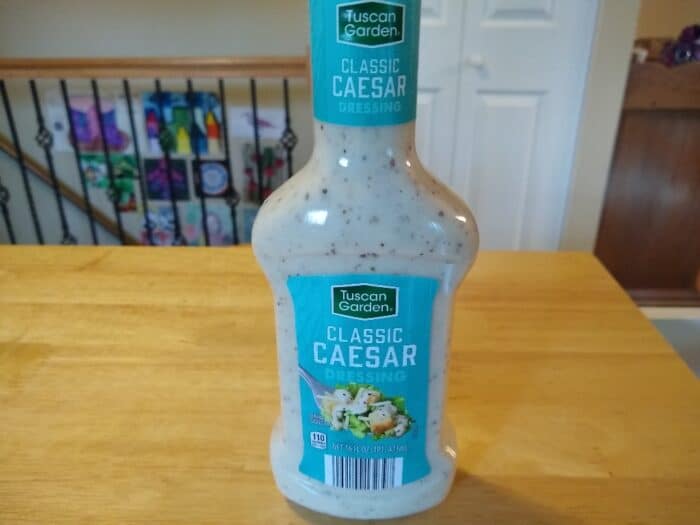 Tuscan Garden Classic Caesar Salad Dressing is a Regular Buy, so you can always find it in stores. It runs 89 cents for a 16-ounce bottle. It works like most other grocery store salad dressing bottles: you have to break the paper seal, unscrew the cap, remove the foil seal, and then screw the plastic cap back on before using. In addition, it should be refrigerated after opening.

Nutritionally, it’s pretty high in fat and sodium, and it contains both milk and eggs. On the other hand, it is gluten free and, like all Aldi private label products, does not contain any artificial colors. 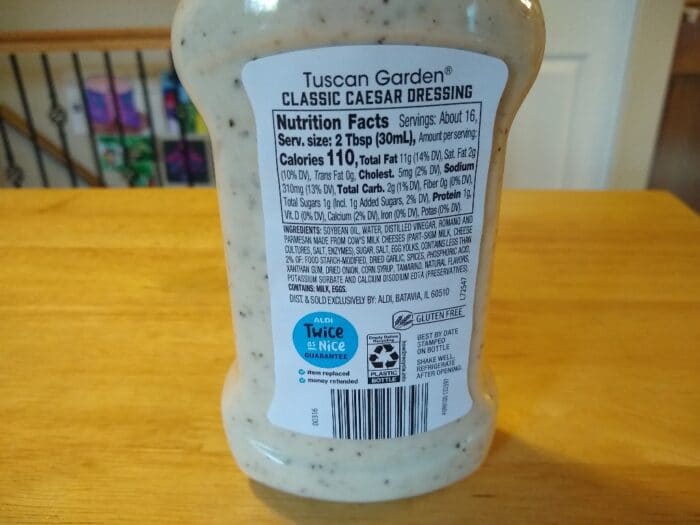 Tastewise … it’s a disappointment. This bottle is not as good as the salad dressing in either the Aldi Little Salad Bar bowls or the Little Salad Bar bags. It has a saltier flavor that tastes different. It isn’t terrible, but I would rather pay the extra for a Caesar kit — which is near-restaurant quality, in our opinion — than use this dressing.