My family loves Mexican and Tex-Mex food. We regularly make tacos, nachos, quesadillas, fajitas, and more at home. Trader Joe’s, which is a cousin to Aldi, sells its own array of Mexican-inspired foods, including mini tacos, salsa, and taco seasoning. I recently picked up some TJ’s taco seasoning for a family taco night. 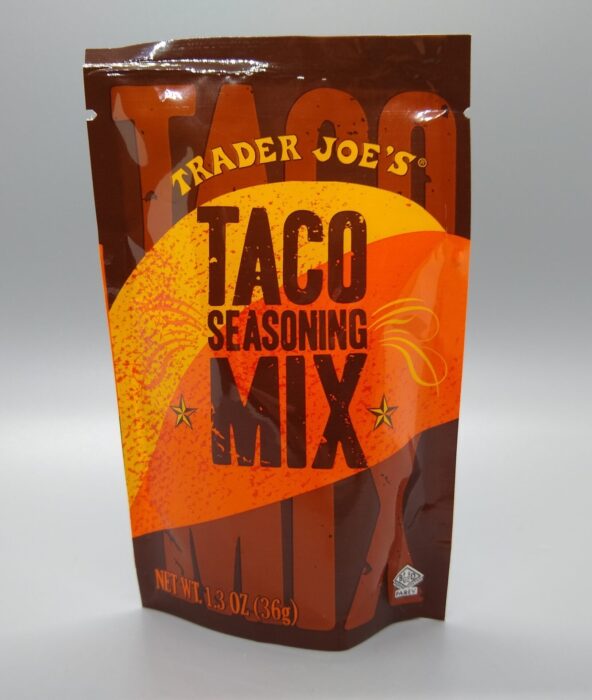 Trader Joe’s Taco Seasoning Mix cost $0.79 for a 1.3-ounce packet at the time of publication. It’s kosher and is a product of South Africa.

Taco seasoning is notorious for having additives such as flour, salt, and processed ingredients, which is why some people like to make their own taco seasoning using common seasonings most of us already have in our pantries. However, this Trader Joe’s taco seasoning mix is made with all whole ingredients, with no preservatives, flour, or other “weird” ingredients. Ingredients are sea salt, cumin, cayenne pepper, cane sugar, paprika, onion, garlic, black pepper, red bell pepper, oregano, chili pepper, and smoked paprika. 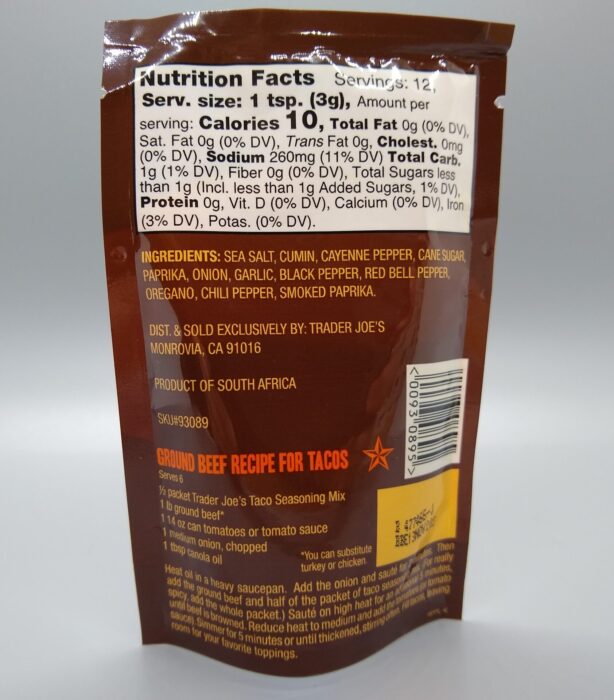 Nutrition information, ingredients, and a ground beef recipe for tacos. (Click to enlarge.)

The packet features a “Ground Beef Recipe for Tacos.” To make tacos with this, you’ll need

Important: I’ll reiterate something from that recipe ingredients list: you only use half of this taco seasoning packet when cooking one pound of ground beef. I’ve read stories from Trader Joe’s customers on social media about how some people use the entire packet of seasoning for one pound of ground meat, resulting in extremely spicy tacos. It’s an easy mistake to make because — let’s be honest — most taco seasoning packets are intended to be used all at once for one pound of meat. It’s a decision by TJ’s that doesn’t quite make sense. Maybe they’re trying to reduce packaging waste by giving you two taco nights’ worth of seasoning instead of one, but I don’t know.

With that said, to make tacos with this seasoning, heat the oil in a heavy saucepan, then add the chopped onion and sauté for 2 minutes. Then add one pound of ground beef and half of the packet of taco seasoning mix. (For really spicy tacos, you can add the whole packet.) Sauté on high heat for an additional 5 minutes until beef is browned. Reduce heat to medium and add the tomatoes or tomato sauce. Simmer for 5 minutes or until thickened, stirring often. Then fill your tacos, leaving room for your favorite topping. 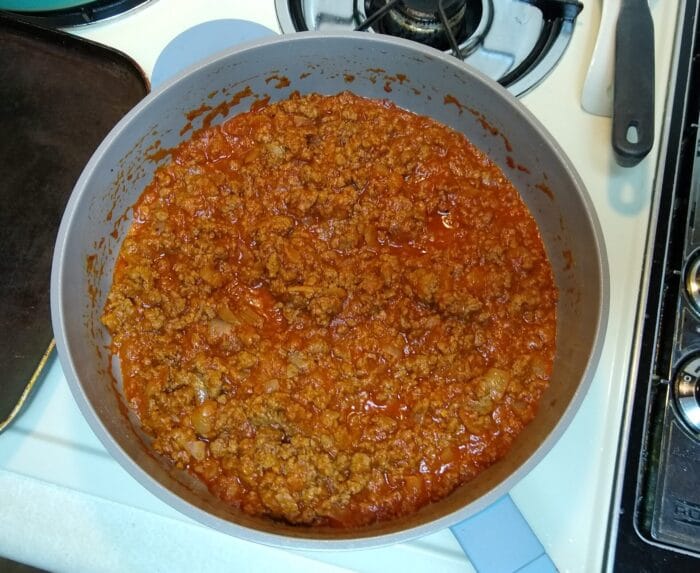 I made these according to the directions and used 1 pound of locally raised, grass-fed ground beef. I opted to use tomato sauce, and I went with two 8-ounce cans of tomato sauce from Aldi, so my tacos were a little on the saucier side since the seasoning packet says to use only 14 ounces of tomato sauce (or diced tomatoes).

Even though I used slightly more tomato sauce, I think this seasoning mix recipe makes tacos that have more sauce compared to standard taco seasoning envelopes I usually buy. That’s not necessarily good or bad; just different. I appreciated that this recipe calls for adding things like tomatoes or tomato sauce rather than water, which is what most standard store-bought taco seasoning mixes call for.

A TJ’s taco with meat, shredded cheese, salsa, sliced tomatoes, and sour cream, along with a side of rice.

I served the taco meat with both soft flour tortillas and crunchy taco shells from Aldi, with the usual toppings such as shredded taco-style cheese, my favorite Aldi salsa, diced tomatoes, and sour cream.

Despite using only half of the seasoning packet (or half of the packet as best as I could tell just eyeballing it; I might measure this out into two small Tupperware-style containers next time to make sure I get it more even), this still made for some moderately spicy tacos. My family doesn’t like extremely spicy foods, but we don’t mind some mild kick. This was spicier than any taco seasoning mix I’ve had, and we probably drank more water and milk with our tacos this time than usual. However, most of us got seconds and didn’t seem to mind the extra heat. They were actually quite good tacos.

This taco seasoning mix is a bit quirky, but it’s not bad. Plus, it’s some of the better-for-you seasoning I’ve seen in stores. And because one packet makes enough for two taco nights, I still have enough seasoning for another round of Mexican food later.

Trader Joe’s Taco Seasoning Mix comes in a small packet that contains enough seasoning to make two pounds of ground beef or ground turkey taco meat. It comes together in a different way compared to standard taco seasoning mixes, calling for the addition of diced onions and canned diced tomatoes or tomato sauce. This makes tacos that are a little on the spicy side, but our family didn’t think they were too spicy. We also appreciated that this mix contains all natural, whole spices without additives or fillers.