A while back, we went shopping at Trader Joe’s, Aldi’s distant cousin. We were on the hunt for a few specific products, one of them being Unexpected Cheddar, which we’d heard rave reviews about online. We didn’t find Unexpected Cheddar that day, but we did stumble on something almost as intriguing: a broccoli soup with the Unexpected Cheddar label.

Now, our family is a fan of broccoli cheddar soup. We’ve gotten it from the likes of Panera (known in its hometown as St. Louis Bread Co.), and we’ve made it ourselves. We’ve also gotten it from Aldi, which sells some from time to time.

So when we spotted it in Trader Joe’s, we decided to try it out. 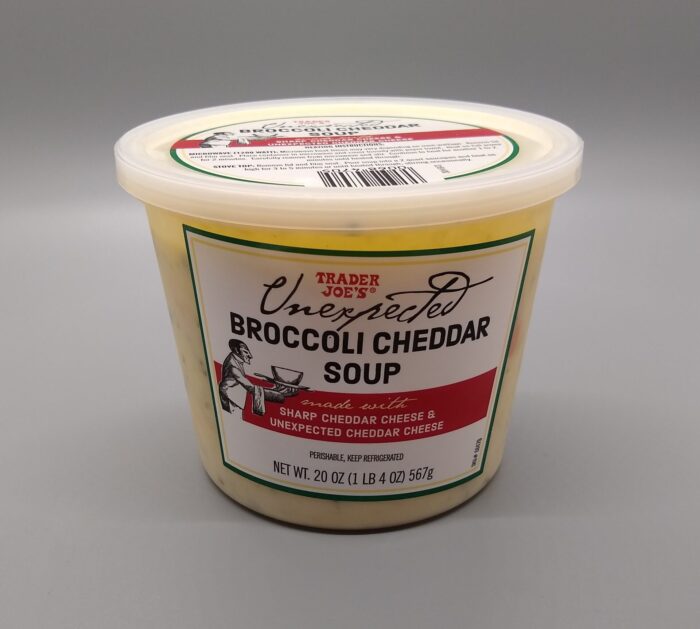 Trader Joe’s Unexpected Broccoli Cheddar Soup can be found in the refrigerated section of the store. At the time of this post, it comes in a 20-ounce plastic container and costs $4.79, or about 24 cents an ounce. It is perishable, so it should be kept refrigerated until eaten. Also note that it does have a best-by date on the lid.

The lid lists two ways to make the soup: in the microwave or on the stovetop.

To cook in the microwave, the instructions call for removing the lid and film seal, then placing the container in the microwave and covering it loosely with a paper towel. I’m not a fan of microwaving plastic, and many health experts aren’t either, so I instead put the soup in a microwave-safe glass bowl. From there, you heat it on full power for 2 minutes, stir, then heat for another 1-2 minutes or until heated through.

To cook over the stovetop, you remove the lid and seal, then pour the soup into a 2-quart saucepan and heat on high for 3-5 minutes or until heated through, stirring occasionally.

We went with the microwave directions, although both take about the same amount of time and probably produce a similar result. Feel free to use whatever you prefer. 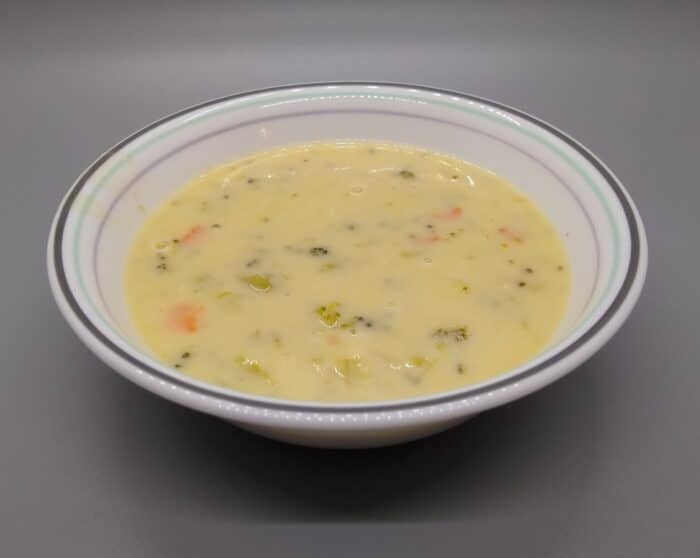 This soup is excellent. It’s rich, flavorful, and robust, with plenty of vegetables and a thick, creamy cheese base. Our family devoured it quickly, and all of us felt like it was close to restaurant quality. We thought the fact that it was refrigerated rather than frozen made for better texture in the vegetables, too, which we felt were just about right.

We found it to be enough for two people, especially if served alongside a sandwich or salad. If you want more soup, you may want to get more than a single container.

Most soups are high in sodium and usually fat, and this one is no different. It’s not great for the heart. It also contains milk, for those with allergen concerns. 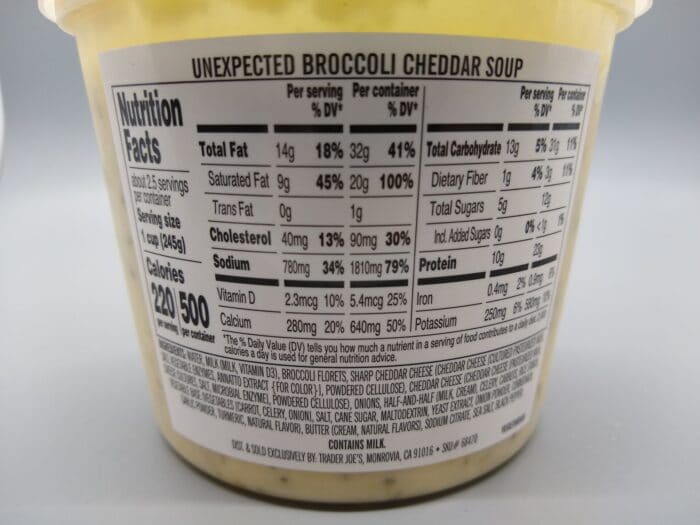 This is good soup. Good soup. It’s easy to make and tastes awfully close to what I’d get from a restaurant. While it’s not the cheapest, it’s certainly cheaper than eating out, and for that reason it’s worth a look if you want broccoli cheddar soup and don’t have the time to make it yourself.