Americans love bacon. We know, because we’re Americans, and we love bacon, too. With a crisp texture and a rich salty flavor, bacon is popular for a number of uses, be it atop burgers, inside a loaded potato, or as a side to a hearty breakfast.

The default option for bacon is strips of raw bacon, which is the go-to option for breakfast or burgers. For that purpose, Aldi sells a few bacon options, including Appleton Farms Sliced Bacon.

However, there are instances where you need bits of bacon instead. Maybe you need sprinkles for twice-baked potatoes, or a garnish for a soup, or on top of a salad. In those cases, you can cook up bacon and chop it, but that can be something of a chore. Simpler is getting a small bag of bacon, which is pre-cooked and pre-chopped, making it as easy as pinching a small amount and sprinkling.

Aldi sells that, too. 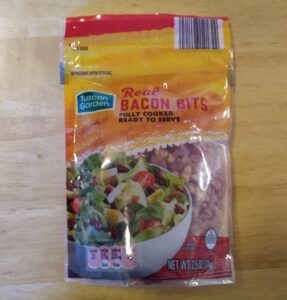 Tuscan Garden Real Bacon Bits are an Aldi Regular Buy, which means you can find them in stores all the time. They come in a yellow-ish pack that vaguely reminds us of other bacon bit packages we’ve seen.

Now, it’s important to note here that there are two kinds of bacon bits on the market. Some of them are imitation bacon bits, like McCormick’s Bac’n Pieces. These bits are crunchy and taste vaguely like bacon, but they’re made out of soy. Because they’re not real bacon, they can be stored at room temperature, and they’re also usually cheaper than real bacon bits.

Aldi’s bacon bits are, like Oscar Meyer Real Bacon Bits, made of honest-to-goodness bacon. They’re more expensive than the imitation bacon bits, but they’re authentic. Because they’re authentic, they also need to be kept refrigerated. In our neck of the woods, Aldi bacon bits can be found in the open-air refrigerated section of the store, near the likes of the seasonal potato salad and artisan cheeses.

At the time of this post, Aldi bacon bits cost $1.29 for a 2.5-ounce pack. That’s a lot more per ounce than you’ll pay for uncooked bacon — you’re trading convenience for price — but at 51.6 cents an ounce, it’s also cheaper than many other real bacon bit options, including Walmart’s Great Value Real Bacon Bits. (McCormick’s imitation bacon bits are more like 37 cents an ounce.)

We’ve tried a number of bacon bits over the years, and we have to say that, by and large, the Aldi bacon bits taste like other real bacon bit options out there. We still think cooking one’s own bacon is the best, because it comes out more crisp, but these bacon bits are pretty good, especially for what you need them for.

We’ve used these bits for a number of things over the years, and we like how they work. We like them on potatoes, in salads, and in soups, among other things.

Nutritionally, bacon isn’t all that good for you, but because bacon bits are by definition meant to be eaten in smaller quantities, that isn’t as big of a factor as it would be with full strips. 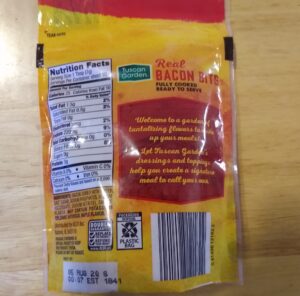 If you need the convenience of bacon bits and you want real bacon, Tuscan Garden Real Bacon Bits are a great option. They’re cheaper per ounce than many other options out there, even the generic ones, and they do exactly what they’re supposed to do. Recommended.